AUSTRALIAN farmers will be able to claim accelerated depreciation on new fodder storages as of today, following changes made by the Coalition Government last year. 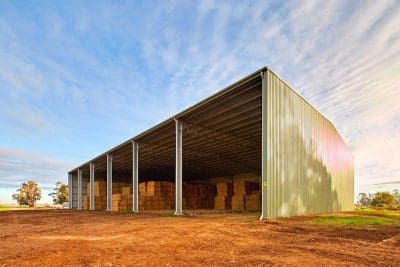 And those receiving Farm Household Allowance who are forced to sell livestock during the drought may continue to receive FHA payments if the profits are deposited into a Farm Management Deposit account.

“Farmers need to store more feed for their animals during drought, and we’re helping cover the cost of new sheds, silos and other storages,” Minister Littleproud said.

“This is one more way we can help farmers during drought.

“Also today, those farmers receiving Farm Household Allowance who sell livestock due to hardship such as drought will not have that affect their FHA payment, so long as they put the sale money into their Farm Management Deposit.

“This is a common sense step to make sure farmers aren’t penalised for doing the right thing and will help our producers set some money aside for re-stocking when the drought breaks.

“We continue to help farmers get through this drought with $6.3 billion of support. Our support is spread right across federal areas of responsibility – Farm Household Allowance, Emergency Water Infrastructure Rebate, Rural Financial Counselling, pests and weeds management, concessional loans and the Drought Communities Program.

“Later this year, the Regional Investment Corporation will offer drought restocking and replanting loans of up to $200,000, with a two-year interest free period, to help farmers restock and replant when conditions improve after drought. On top of this, we’ll soon have the Future Drought Fund in place to help our rural communities build resilience with $100 million per year towards building resilience and greater preparedness for future droughts.”

Mr Littleproud has welcomed news the Regional Investment Corporation will cut its rates from August 1.

“I’m pleased to support the reduction in the RIC Loan rate to 3.11 percent,” Minister Littleproud said.

“The RIC’s average rate is 2pc lower than the commercial lenders. On a $500,000 loan, that’s a saving of around $10,000 a year. The RIC is seriously helping farmers in hardship, farmers in drought, and farmers who want to build dams. In the past financial year alone, the RIC approved 172 loans worth almost $166 million,” he said.

“Those are real farmers getting real help. I’m so glad the RIC is delivering and helping farmers.

“I’m also excited the RIC is providing a real and cheaper alternative to major banks and bringing more competitive tension to the market.”

The RIC has been operational since 1 July 2018. It was initially blocked by the senate in late 2017 but passed the senate in Minister Littleproud’s first parliamentary week as Minister in February 2018.

A suite of attractive farm business loans have recently been launched by the Regional Investment Corporation.

Three different loans are available for farmers depending on their circumstances:

For producers wanting to know more about a RIC loan for their farm business, or those advising farmers on their finances, RIC is holding a webinar called Smarter finance for smart farmers on Thursday August 1, from 12:30pm.

Queensland Business Development Manager Craig Turner will guide producers through eligibility, terms and the application procedures of the RIC loans.