SHAREHOLDERS have savaged the Australian Agricultural Co’s stock value in the wake of Wednesday’s announcements to the market about operational reviews of the company’s poorly-performed Livingstone Beef processing plant near Darwin and some branded beef programs.

The share price suffered an 8pc discount immediately after the announcement, falling from $1.22 to as low as $1.08, before recovering later in the day to $1.12 at close of trading on Wednesday.

Yesterday the share price recovered a cent, closing at $1.13 – still close to its lowest point since hitting $1.62 back in November.

AA Co’s weekly average price trend over the past 12 months (Note: graph does not capture the slide in value seen over the past two days)

AA Co has experienced a dramatic fall in its share price over the past year, from $1.92 last June, arousing recent speculation over a potential buy-out by largest shareholder,  UK billionaire Joe Lewis’s Tavistock Investments, which Bloomberg suggests has gradually crept up to a 42.48pc stake in the world’s largest beef business.

The mood evident during Wednesday’s analysts’ telephone briefing suggested onlookers were taken by surprise by the financial disclosures – particularly those surrounding the performance of the Livingstone Beef asset, which up to now has been obscured by being reported within the company’s broader northern beef operations. 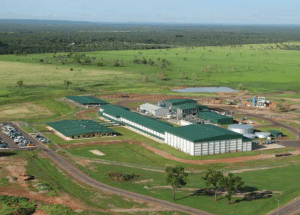 The newest and most modern beef processing plant in Australia, the Livingstone asset cost AA Co $100 million to build only three years ago, amid great fanfare. Local reports in Darwin suggest the plant has been operating for only two days a week in recent times.

Any reservations about the project’s chances of success, including comments from experienced processing industry sources published by Beef Central when the project was first floated, were quickly hosed-down by AA Co management and the board, as ‘lacking vision.’

In disclosures covered in greater detail in this article we published on Wednesday, AA Co forecast a likely loss before tax of $30-$40 million for its trading year to March 31 – a massive turnaround from profit of $133 million a year earlier.

The company announced a strategic review of its Livingstone Beef processing operations, “to assess all available options and determine the optimal path to deliver shareholder value from the facility.”

AA Co reported significant losses related to the Livingstone Beef business in the range of $60-$65 million, reflecting an impairment charge against the carrying value of the business and ‘onerous contract provisions’ including the provision of gas supply to the plant.

Wednesday’s briefing was told the company’s performance in the second half of last financial year, ended March 31, had been affected by external challenges including increased competitive dynamics in certain markets, a higher Australian dollar, higher input prices and an elevated cattle price environment for the Livingstone Beef plant, resulting in higher cattle procurement costs.

In a significant departure from previous briefings where individual performance of the Livingstone Beef business was shrouded within broader company results, AA Co has now chosen to directly report on the asset’s performance. It said Livingstone was expected to contribute an FY18 operating pre-tax loss of $18-22 million for the full year. That compared with an FY17 operating loss of $12.5 million – the first time that figure has been publicly disclosed, in Beef Central’s understanding.

In order to provide greater transparency to the market, AA Co said it intends to include ‘segment disclosure’ for Livingstone Beef in its full FY18 audited results, due for release on May 23.

AA Co provided a written response after Wednesday’s briefing on whether the Livingstone facility could now be put on the market:

“The review will provide an understanding of the broad range of potential alternatives and at this stage we have not ruled anything out. We will provide a detailed update on the review at the time of our 2018 financial year results, to be announced on May 23. While this strategic review is underway, management will continue to focus on the controllable aspects of the production process, including further improving the operational efficiency of the plant.”

Last year, AA Co embarked on an overhaul of its executive team, purportedly on the back of greater control being exerted by Tavistock.

One analyst from Bennelong Asset Management asked whether the company would consider selling its properties and returning the cash to shareholders, given that the company’s share price was trading at such a discount.

“That’s not within the scope of the review,” CEO Hugh Killen said. “Our properties form part of our unique supply chain, and the cattle are obviously key to what we do, in being a branded beef business. We are focussing on improving performance in the business, and that is the core part of the review. We believe the decisions we are making here today, in terms of how we approach our supply chains, will increase our underlying profitability, and therefore the share price.”

“What happens if you don’t succeed?” the Bennelong analyst asked.

“We will succeed,” Mr Killen said.

AA Co’s Dane Fitzgibbon would not speculate on an assessment by another analyst that the company’s full net profit after tax, based on the full balance sheet, might reach $60 million this year, saying this would be disclosed in May.

“Today’s information is a pre-release, using ranges from the unaudited numbers,” he said. “We tried to deliver what we could reasonably provide, early, to give the market transparency, but there is a layer of detail that will follow in May,” he said.

“The Livingstone review will come back with a fulsome report at the release of the full-year results in May.”

Another analyst said over the past ten years, there had been brief ‘glimmers’ of returns on assets approaching 10pc, and he wanted to know what the board’s target for ROA was, and how it proposed to get there.

“What we’re doing, as part of the review, is focusing on the performance of the business, and getting to the position where the business is performing up to its opportunity. But we have not set a target at this point for return on capital,” Mr Killen said.

“You’re a listed company on the stock exchange,” the analyst said. “You have peers around you that have set 10-15pc return on asset targets.”

“We assess investments on a case-by-case basis, for their contribution towards executing our strategy,” Mr Killen said. “But we’re not disclosing benchmarks for the entire company.”

“Looking at the cost base of some of AA Co’s unlisted peers (other large privately held pastoral companies), are you happy with the cost base – the multiple layers between senior management and the people on the ground?” an analyst asked.

“There is a strong view, which will come into focus as part of the review process, that we can reduce some of our cost base,” Mr Killen said. “The decision around the 1824 brand program (100-day grainfed beef – now to revert to cattle sales instead of retained ownership through the supply chain) was the first part of reducing that cost base that exists in our business, and we’d expect to be able to eliminate further costs going forward,” he said.

“The strategic blunders have just been one-after-another, with chopping and changing, and a laundry list of excuses accompanying each set of sub-standard results”

Aaron Edwards from Alta Investment Management, asked when the AA Co board, and in particular the chairman, would be held accountable for the “extremely sub-standard performance” of the business over an extended period.

“Mr McGeochie has been chairman for the past seven years, and we have been a shareholder for most of that, unfortunately. The strategic blunders have just been one-after-another, with chopping and changing, and a laundry list of excuses accompanying each set of sub-standard results,” Mr Edwards said.

He sympathised with Mr Killen, having been CEO for only a short time, but he said it had been ‘going on’ for a long time, and obviously most of the high-level initiatives (ie Livingstone Beef) had been signed-off on, and presumably extensively investigated, by the board. His question was, “when is there going to be some accountability at that level?”

Mr Killen said he would take the comments on board, and feed them back through to the chairman.

Chairman Don McGeochie did not participate in Wednesday’s investor briefing.