AA Co has ‘built something to be proud of’, chairman tells shareholders

AUSTRALIAN Agricultural Co board chairman Don McGauchie told shareholders attending the company’s annual general meeting in Darwin this morning that over the past four years, the company had “built something to be proud of.”

“We have spent the past four financial years transforming your company,” he said. The business had evolved from an Australian pastoral company with a proud domestic history into a luxury branded beef business with an exciting international future.

“We have built… an authentic beef brand our customers can trust. At AA Co, we have earned trust by taking greater control of our supply chain, investing in innovation and technology, and investing in our brands,” Mr McGauchie said.

“Before setting down this path back in 2014, we knew this transformation would take time and considerable effort. Your board debated the decision to fundamentally change the way we had done business and the required changes that would be necessary to the company’s culture.”

“In the end, we unanimously concluded that the outcome of these efforts would definitely support the commitment to change. I am proud to state, as a consequence of those years of planning and investment, we are seeing the fruits of our labour and are now in a position to take our brand to the world,” Mr McGauchie said.

As part of that process, AA Co launched its Wylarah and Westholme brands in Singapore last October. A second launch in Taiwan followed.

“We will be intentional in our expansion, learning from each launch,” he said.

“I am delighted to say that our Singapore launch resulted in a significant increase in demand. Volume increased 11 percent and overall average sale prices increased by 28pc between September 2016 and March 2017 – compared to the same period in the previous financial year,” Mr McGauchie said.

While the increased integration of AA Co’s supply chain had made the company’s business more ‘predictable and resilient’, it remain exposed to a number of external factors, Mr McGauchie warned.

“In recent months, the Australian beef industry has been dealing with a rise in the value of the A$, higher feed prices, offshore regulatory uncertainty, changes in global beef supply and Australian cattle prices softening from historically high levels. This is why our strategy of vertical integration is so important, to reduce some of our exposure to these external market factors. We will continue to invest in our business to improve the productivity of our asset base and strengthen our organisational capabilities.

“This will include investment in people, physical infrastructure, and innovation. We will continue to apply a disciplined approach to undertaking such investment decisions, with a clear understanding of the expected strategic and financial benefits.”

Mr McGauchie made a number of references to the contribution of managing director, Jason Strong, who ‘resigned’ unexpectedly from the company a fortnight ago.

“I want to take this opportunity to thank Jason for his hard work and leadership. The recent success of AA Co owes much to his stewardship,” Mr McGauchie said.

“He has travelled tirelessly around the region and within Australia to promote the company and to ensure our operations are in great shape. On behalf of the board and everyone at AA Co, I want to wish him the very best in his next endeavours.”

Delivering his final AGM address as managing director, Jason Strong told shareholders that to realise AA Co’s exciting future and become a global brand, the company needed to finish the transformation that started in 2014. 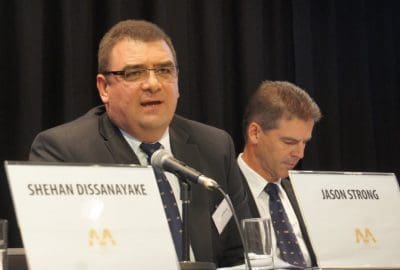 “In fact, it has transformed. We have changed our business model – moving away from cattle sales and focusing on adding value to the supply chain.”

“We have strengthened our supply chain – and made significant investments in production. We have used data, analytics and technology to focus on quality. And these changes have worked.”

“Many of the people who made those changes a success remain with AA Co and – thanks to the experiences of the past four years – are more than capable of taking the company into 2018 and beyond.

“The point I am making is this: AA Co is more than its CEO. It is a team of great individuals that are dedicated to the company and its future success. Your company has a great story to tell, a great product to sell and great people on hand to get the job done,” Mr Strong said.

He outlined some of the performance highlights over the past 12 months, including a 26pc increase in the number of head processed, a 30pc increase in the kilograms of beef produced, and a 30pc decrease in conversion costs at AA Co’s Livingstone facility.

“Our relentless focus on supply chain optimisation and debtor controls saw $15.1 million of cash released from working capital; our cattle production costs decreased by 27pc; and the average selling price for Wagyu and shortfed beef increased 12pc. In other words, we are paying less to produce world-class beef – and the world is paying more to consume that beef,” he said.

He also drew attention to the company’s net operating cash flow – a $7.5 million improvement, which he described as ‘important.’

“It’s important because it was delivered during a time when we increased the proportion of Wagyu in the herd – from 15.6pc to 18.5pc – and purchased 70,000 megalitres of water rights. That demonstrates two points: first, the business is strong; and second, the business is investing to ensure it remains strong. That is why AA Co is on a solid path to growth.”

Mr Strong’s parting remarks to shareholders elucidated a sense of deep pride in his achievements, and those of his staff and the company itself.

“I am proud to have been part of the AA Co family. Proud that, during my time, our share price has increased by almost 40pc, profits have increased, there were no land sales, while our total assets increased by 41pc, and there were no workplace fatalities, while the lost time injury frequency rate fell from 78 to 15 injuries per million hours worked.”

“I am very proud of the health and safety culture that we have developed during my time as managing director and CEO. I leave AA Co in better shape than I found it – confident that there are even better days ahead for an iconic Australian company that is well on the way to becoming an iconic global brand.”