FED cattle prices in the US have continued to strengthen throughout 2017, breaking away from the Australian market yet again, and pushing higher against the major South American producers.

Long-term movements in cattle prices* reflect Australia’s ability to compete on the global market; the US is the primary competitor in Japan, Korea and the US domestic market, while the South Americans have a strong presence in the Middle East, EU and China. 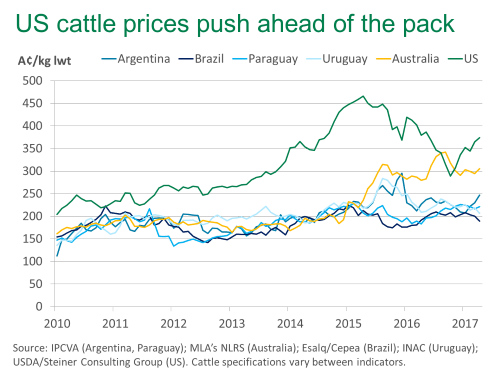 Upward US price movements partly reflect the seasonal demand increase ahead of the US grilling season. However, as pointed out by Steiner Consulting Group last week, some of the recent increase is speculative of potential trade disruptions with Mexico – of which the US has a beef trade deficit – and the anti-North America Free Trade Agreement sentiment from the Trump administration.

Reduced imports from Australia and New Zealand and a drop in cold store inventories have also partly offset growing US production.

In contrast, Australian finished cattle prices have remained fairly stable so far this year. Meanwhile, in A$ currency adjusted terms, finished cattle in Brazil, Uruguay and Paraguay have softened while cattle in Argentina have lifted to a 12-month high.

While Australian prices have returned to their middle-of-the pack position after hitting the top of the Leaderboard briefly last year (see Beef Central’s earlier report), global cattle prices are yet to return to historical norms:

Until domestic prices ease further, or the rest of the world finds another gear, it is likely Australia will continue to feel competitive pressure from other players in key export markets, MLA suggests.

*Cattle prices referenced in this article are benchmark indicators and specifications differ between countries (e.g. the US indicator is for a fed steer while the Australian indicator is for a saleyard, predominantly grassfed, heavy steer). Hence, absolute premiums/discounts may not reflect the actual price differences; rather trends can be analysed to measure relative movements between cattle markets.