The cattle market in FY20: from extreme lows to exciting highs

AS the FY20 financial diaries have now been closed, the AuctionsPlus Market Insights team has delved into its data to track the cattle market while these unprecedented events unfolded.

As reported earlier on Beef Central, AuctionsPlus finished the financial year with 632,887 head of cattle listed online, a 62pc increase on FY19. The first half of the financial year was undoubtedly affected by the drought with high destocking rates across the country.

The prolonged dry conditions correlate with the regions that offered the most stock online. Between July and December 2019, the largest listing region was the Northern Tablelands of NSW, offering 44,239 head, followed by the N.W. Slopes & Plains of NSW and Southern QLD. The Bureau of Meteorology reported that the rainfall deficiencies since early 2017 were most extreme in those regions.

The convergence of both the outbreak of COVID-19 and the wet start to 2020 saw March and May of 2020 as the two biggest months for the financial year with 98,962 and 94,914 cattle offered respectively.

The spike in listings illustrated below highlights the trend of producers seizing opportunities in the high prices as well as an increased online audience as COVID-19 restrictions were put in place across saleyards. Purchasing has been driven by restocking demand from regions that received above average rainfall at the beginning of 2020. Southern QLD, the NW Slopes & Plains and Central Western NSW dominated purchases for the financial year, accounting for 42pc of cattle bought between them.

These three regions had significantly depleted herds and sought to rebuild numbers with the positive turn in season. They each predominantly sought steers and heifers, however, they also bought large numbers of breeders. Southern QLD, for example, was the biggest purchaser of PTIC heifers with 2700 head returning to the region out of the 23,300 head sold online.

Cattle prices spiked soon after rain hit the gauges, which drove the FY averages upwards for all stock categories, as demonstrated in the graph below.

It is not only breeding articles that followed this market trend. Weaner and grown steers and heifers were also swept up in the increased restocking demand since Jan 2020, as illustrated in the graph below. Weaner steers averaged 468c between Jan-Jun 2020 to raise the yearly average to 394c, 100c dearer than FY19. Weaner heifers increased 110c as they averaged 356c for FY20, largely driven by the Jan-Jun spike in prices where they sold for 427c. 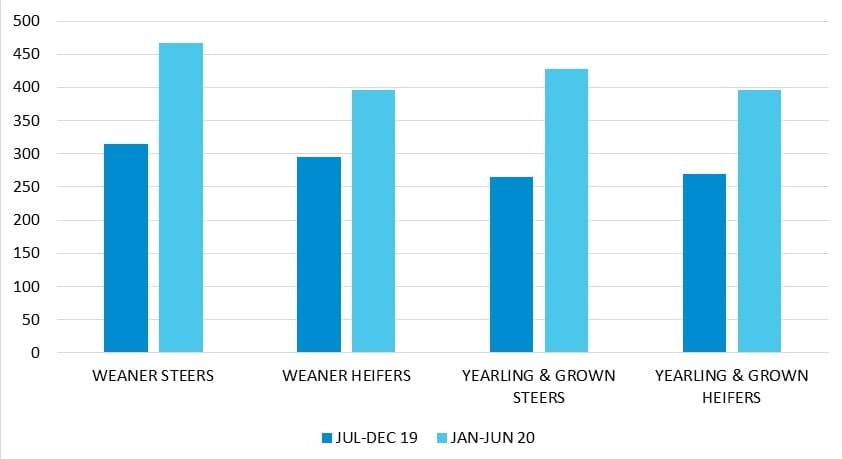 The 2020 financial year has seen the cattle market rise from its knees in the grip of drought to the record highs following replenishing rain.

A unique combination of the lowest national herd numbers in history, a wet start to 2020 fuelling restocking demand and a world-wide pandemic has seen cattle prices skyrocket to new levels.

Heading into FY21, the store market shows no signs of slowing yet, as buyer confidence remains buoyed by follow-up rainfall in the south and a positive seasonal outlook.