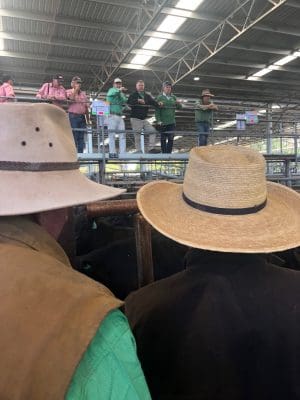 Under the roof at Euroa buyers got a good look at this year’s first feature offering of Autumn-drop weaners.

The first sales of Victoria’s autumn-drop weaners have, in most instances, underwhelmed pre-market expectations at Euroa on Wednesday.

Hopeful of achieving an overall sale average of 330c/kg, selling agents and participating vendors experienced a more sedate result that ranged mostly from 300 to 330c/kg, which was deemed satisfactory under the circumstances without being lavish. 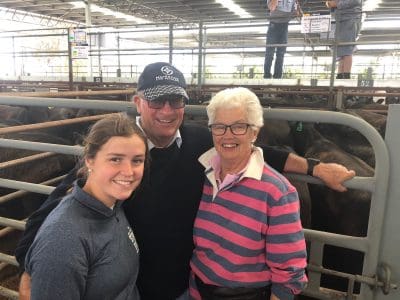 Euroa vendors, Richard McGeehan and Sue Gall, with granddaughter Chloe Locke, Seymour, sold to a top of $1230 80 head of their Flowerdale Angus weaners.

Click above to watch Murray Arnel’s interview with Russell Mawson

“It wasn’t a buoyant market by any means” Mr Mawson said.

“The competition was very regionalized. It was based mainly on a thin veil of lower northeast bullock finisher inquiry underpinned on the lighter cattle by a live export order for Russia”.

“Nothing to the restockers went north of Wangaratta or south of Pakenham and there was no interest from the southwest. This was especially the case for the weaners which was predominately an all-black steer yarding although some grown steers older than 12 months were purchased for South Australia.

Nutrien auctioneer Daniel Fischer said that most of the buying was conducted in tight dollar per head ranges.

“Bidding was generally very cautious and buyers obviously had a price in mind for what they wanted to spend. However, because of the evenness across the yarding the vast majority of the 300 to 360kg pens were sold from $920 to $1100, with only the odd pens sold higher.

Rodwells Mick Curtis said that the heavy end of the weaners appeared buyable on the returns of finished bullock sales.

“When you are selling finished bullocks for around the $2000 per head mark and buying the top-end replacements at $1150 to $1200 it appears good business” Mr Curtis said.

“But on the rest of the market if it wasn’t for the export order the result may have been a whole lot different”.

Elders auctioneer Joe Allan said there was definitely a discount attached to any non-weaned lots.

“The sale fluctuated broadly at times”” he said. “And those that were most at risk of receiving a discounted sale were the non-weaned lots which knocked them out of export contention”. 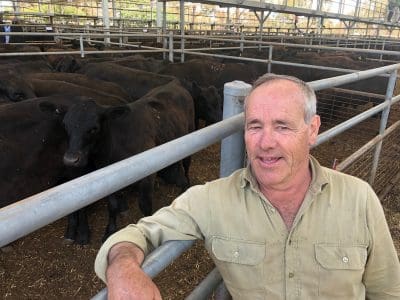 All agents expressed their concerns at the low level of lot feeder interest that saw only the order support the weaner sale buying only the one load of steers.

A further backgrounder/feeder order from South Australia also operated but its participation was restricted to the pens of grown steers, aged 12 months and older.

Opening the sale and achieving the market’s highest price for weaners was a pen of 13 Angus, aged 9-10 months that weighed 421kg.

Offered by Margorie King of Balmattum these were sold at $1350 a head to Rodwells Alexander while the same order claimed, at $1270, the second pen of the day being a yard of 20 Angus, 387kg, offered J&H Wall and Sons of Caniambo.

Next sold was a yard of 24 Angus, 380kg, offered by Richard McGeehan and Sue Gall, Flowerdale, Euroa, while Ingpen Farms and J Straughten sold a multi- vendor yard of 19 Angus, 423kg that made $1240.

These four yards were, in fact, the only sales to exceed the $1200/head mark while a further dozen or so yards throughout the weaner penning received prices that exceeded $1100.

The live export order which claimed some five loads or about 550 head was operated by Landmark International.

While bidding on perhaps twice as many more than it purchased the order mostly operated in a price range of $930 to $1030 and, as mentioned, clearly selected from lots that had been weaned. 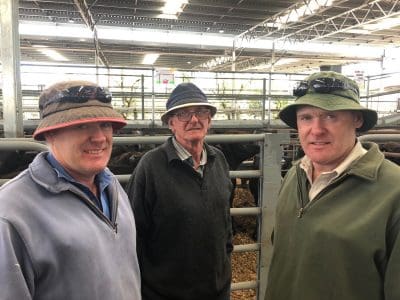 Meanwhile demand from the feedlot industry was conspicuous by their absence with only one major feeder participating and buying only the one load of weaner cattle while another operated solely on the limited selection of grown steers.

The selling of weaners in annual feature fixtures throughout the greater southern region will continue today at Naracoorte, SA where 5590 autumn-drop steers have been listed for sale.

Another 2000 heifers weaners will be offered at Naracoorte on Friday.

The Hamilton and Casterton series of annual weaners will commence, January 6th through to January 10th with seven sales to be conducted over five selling days.

Other leading sales of note at Euroa included: