Overall numbers offered rose 33pc to 3877 head, but remain only a small fraction of the 9000+ offerings seen for long periods earlier this year.

Prices jumped across all categories on Friday, with a 93 percent clearance recorded at auction.

All steers cleared the 300c/kg mark and only a handful of heifers were still below 300c in value.

In a breakdown of the catalogue by weight: Cows with calves at foot were a hot commodity on Friday, topping with this line of three-year-old black baldy first-calvers at Barraba, selling as a three-in-one unit for $2410, being in calf to Angus with 258kg Angus calves at foot.

Cows with calves at foot were a hot commodity, topped by three-year-old Black Baldy first-calvers selling as a three-in-one unit for $2410, being in calf to Angus with 258kg Angus calves at foot.

The map published below shows the destination for each  AuctionsPlus consignment sold during October, colour-coded by state.

It clearly shows the ability of the online marketing platform to reach more distant buyers, often outside the reach of conventional selling methods. While some of the cattle flows are ‘logical’ (i.e. cattle moving out of dry areas of Qld into NSW) others are surprising. Note, for example, the shipments of NSW cattle into Victoria, Victorian stock into southern Queensland, and NSW stock into North Qld. Click on image for a larger view. 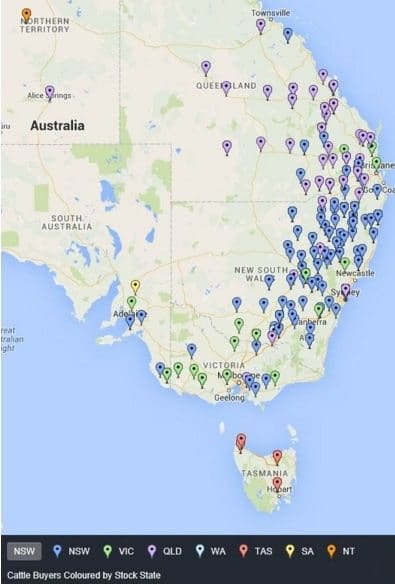