A MAJOR redevelopment of the Dalby Regional Saleyards was officially opened by Queensland Minister for Agriculture and Fisheries Bill Byrne earlier today.

With more than 200,000 cattle sold through the facility, the Minister said the Dalby Regional Saleyards were “the largest one-day selling centre for livestock in the country”.

The Queensland Government contributed $4.56 million towards the project.

“The saleyards makes a significant contribution to the local economy and provides employment here in Dalby and across the wider Western Downs region,” Mr Byrne said.

“During the two-year two-phase redevelopment 87 staff worked on-site and 64 off-site.” 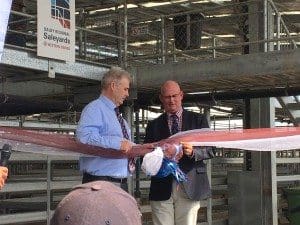 Operationally the facility has 75 permanent staff including those who work in cattle delivery, drafting and National Livestock Identification System scanning.

“The redevelopment has been considerable and will ensure Dalby continues to make a significant contribution long into the future,” Minister Byrne said.

“Modern saleyards on this scale will meet industry requirements and will remain an important part of the beef supply chain for decades to come. The redevelopment improves cattle handling and animal welfare as well as delivering improved site safety for livestock buyers and selling agents.”

“Queensland produces a world-class, high-quality product for world markets and investments like this are vital to support the industry.