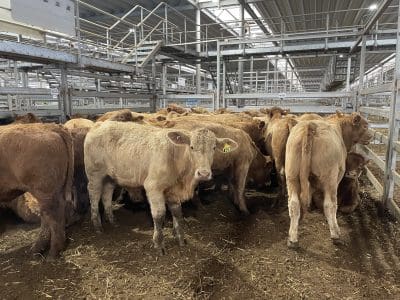 THE trading of store cattle at the Wodonga saleyard was once again conducted under restricted Covid-19 rules on Thursday when only registered professional buyers and agents were allowed entry into the region’s Northern Victorian Livestock Exchange (NVLX).

And, although off-premises bidding and the viewing of the sale was made possible via the Stocklive video auction platform, the recent gilt-edge demand for smaller drafts of young weaner stock lost some of its zip in an otherwise unchanged to dearer market for heavier feeder classes and specialty lines.

With heavier yearling cattle in reduced number, auctioneer, Oliver Mason, Elders said the lot-feeder contingency of the buying field displayed much more urgency for any suitable-to-feed steers and heifers.

“In fact, one feeder selected from the weaner run, which we haven’t seen to date this year” Mr Mason said.

“Heavier steer prices could have easily 20 cents a kilogram stronger while the much of rest clung tightly to last month’s rates”.

What did sell well he said were the large feature lines.

“There were several of them and rocketed along to volume buyer support.

“However, the smaller drafts did miss the presence of the smaller restocker-operators who do like to attend and buy their own cattle but their attendance was discouraged by the enforced Covid rules” Mr Mason said.

The feeder orders and the orders held by the commission buyers were all very strong. Mr Deimel said. They sent cattle both north, south and to South Australia while online bidding was very supportive on small young heifers for placement in northern NSW, he said.

Opening the sale, a pen of seven Angus steers, 523kg, from TG & S Prendergast, Lima South, was sold at $2420 to the Teys Australia, Charlton feedlot.

To the disappointment of the feeder contingency the yarding lacked vital numbers in the 400 to 450kg weight range.

Craig McNabb’s CM Pastoral consigned a cracking draft of 260 Charolais-Santa weaners that were presented in fresh forward-condition from his Moama property, Corringle.

A 100-head Angus steer consignment from Bindi Station at Swifts Creek was another feature line to turn heads.

Dry times in the hub of the Riverina at Jerilderie saw an unseasonal turn-off of Shorthorn weaners and PTIC Shorthorn cows by RL and AH Rollinson.

Following the trend of the steer market, sales of any suitable-to-feed heifers were dominated by feeder buyers at rates varied mostly between 460 and 520c/kg.

TG&S Prendergast, Lima South sold 26 Angus, 353kg, at $1920 with all of the above snared by Ladysmith feedlot, Ladysmith, NSW.

A renewed interest in securing breeding females provided a burst of enthusiasm in the opening lane of the sale.

With almost pens commenced with an opening bid of $3000, genuine beef-bred cow and calf outfits soared to a top price of $3700 for a yard of 22 Angus two-year-old heifers, re-depastured, with young fresh Angus calves at foot.

These were sold by Willette Farms, Tocumwal, while the Estate of LJ&JE Beale, Jindera sold two yards of Angus two-year-old heifers, with Angus calves, aged 4 weeks to 4 months, de-pastured to Charolais bulls at $3170 and $3080 respectively, while a third yard of Charolais heifers, same vendor, age and joining, made $3040.