Numbers offered on Friday totalled 6242 head, down about 1000 head or 13pc on the previous week. About three quarters of the offering came out of Queensland and more than 1600 of those are now heading to buyers in NSW – again demonstrating the online platform’s ability to reach out to more distant buyers. 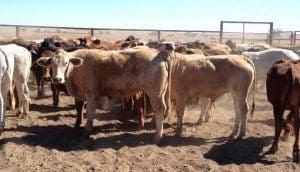 Part of a line of Brahman crossbred backgrounder steers from Charters Towers, EU accredited, that sold for 346c/kg on Friday

In a positive sign, there were also some restocker cattle moving back across the border into Queensland, and NSW buyers (some buoyed by rain) snapped up the majority of the cattle offered out of Victoria and South Australia.

There were 368 buyers logged-in to the Eastern States northern/southern sales, which produced a clearance rate above 90pc at auction.

Light steers under 250kg offered on Friday were exclusively out of Queensland (mostly dry areas), and ranged in price from 253c/kg to 411c liveweight, averaging 351c. Heifers in the same weight category made 242-475c to average 335c.

Plenty of feeder weight cattle were available this week with steers over 350kg selling from 287c to 341c to average 314c, up 22c.

Yearling PTIC heifers sold from $855 to a top of $1300 for Santa heifers near Roma, in calf to Santa bulls. Proven breeders made $1260 to $1520, with the top price being for four to none year old Angus cross cows in calf to Angus.

In the sale’s Wagyu segment on Friday, registered Fullblood heifers out of southern NSW made $2751, and in Emerald, 12-40 month old unjoined F4 heifers made $1820.

A younger pen of 178 lighter flatback Brahman cross EU-eligible backgrounder steers from the same vendor, 263kg at 12-18 months, made an exceptional 345.9c/kg or $881 a head. 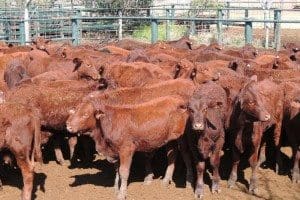 The offering gave buyers some interesting insights into cow-and-calf values. Bull, steer and heifer calves weighing between 94kg and 134kg sold from $445 to $520, while an older and heavier draft weighing 203kg made $775 or 381c.

While the two lots that sold at above 400c/kg were extremely light weight by Queensland AuctionsPlus listings standards, it is possibly the first time a line of non-Wagyu cattle sold at auction in Queensland have made above the 400c/kg mark.

Other results in the Alice Downs offering included:

The Alice Downs sales went to buyers over the border at Inverell, Narrabri, Gunnedah and Dubbo, where rain has fallen recently.