AUSTRALIA’s first-ever attempt at a dedicated forward contract feeder cattle sale conducted on AuctionsPlus on Friday has been seen as a ‘solid success,’ but it is early days for a concept which is still in its infancy in this country.

The sale offering of 1610 feeder steers saw eight of the 22 lots offered find buyers during the sale, with an additional seven lots being successfully negotiated with the highest bidder over the next 24 hours.

All the buyers were Eastern states feedlot operators looking to build their inventory of feeders later this year when numbers are inevitably going to be short. 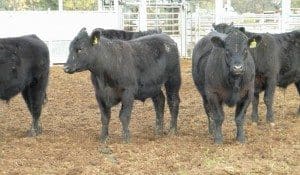 Part of a line of 50 heavy feeders that made 345c/kg live on Friday’s inaugural AuctionsPlus forward contract sale, for delivery from September 24.

Fourteen feedlot bidders from Victoria to Queensland were registered for the sale, eight of which posted bids. While AuctionsPlus is unable to disclose buyers for confidentiality reasons, Beef Central understands the bidding gallery represented a ‘very substantial slice’ of the Eastern States lotfeeder sector.

In total, the sale found buyers for close to two-thirds of the feeders offered – mostly high quality Angus or Angus cross cattle in easy-to-handle mobs of 50 or 75 head.

Most of the 22 listings carried delivery dates from late September, into January next year. The entire offering was heavy feeders +400kg, suitable for 100-day programs or longer.

“Forward contracting allows producers, lotfeeders and processors, for that matter, to plan and budget forward at prices that are acceptable to both parties. Being able to secure those cattle ahead is obviously so important for continuity of supply for buyers, especially when numbers are tight,” she said.

“Additionally, putting those sales through an auction process helps establish a true market floor, which is difficult in a segment like feeder cattle where supply is dominated by direct paddock sales.”

“The forward sale mechanism allows for open competition as well as providing all parts of the industry with continuity of supply. And producers can budget forward knowing what price they will obtain,” Ms Speer said.

“We feel that this will assist in managing the volatility of the spot market.”

“Creating liquidity in the market using a competitive process determined by supply and demand seems to be a logical step, allowing producers to concentrate on getting stock to the required quality according to the contract. This method also allows lotfeeders to access stock that they may not have normally had access to, by utilising the agency networks.”

Friday’s inaugural sale was conducted as an invitation-only private Auctions Plus fixture by Callow Livestock for the company’s clients, but a second forward contract feeder sale, open to all agents (endorsed for forward contract sales) and vendors, is scheduled on AuctionsPlus for September 11.

Part of the preparation for the first sale has included developing a set of rules and regulations, to account for issues like weight variances and other potential problems that might emerge when cattle delivery is well forward of the auction date.

Weights listed in each lot offered in Friday’s sale, for example, are estimated weights at time of delivery – typically between 400 and 500kg.

“One of the points we have focussed on is in ensuring that the people doing the assessments are of the highest calibre, because we want buyers to have that confidence to purchase,” Ms Speer said. “We’ve been consulting with feedlot buyers, processors, agents and producers to come up with a set of ground-rules and operating conditions to make sure the process works,” she said.

The operating conditions for forward contract listings will be available for scrutiny later this week, and will be added to this news item when provided.

Two other lines made 340c/kg, on property:

Only three of the 22 lots failed to raise a bid, mostly for December/January delivery, perhaps suggesting buyers – at this stage at least – were more reluctant to punt on prices more than a month or two ahead.

While this first sale sample was relatively small, if the forward contract sale concept gathers pace, it could also provide a valuable indicator of future young cattle price trends – especially in the absence of any live cattle futures trade mechanism in Australia.

“Even this small, first sale provided a bit of an indication of what buyers are willing to lock in,” Ms Speer said.