ANOTHER week, another new record high for the Eastern Young Cattle Indicator.

The EYCI closed the week yesterday at 1043.33c/kg dressed weight equivalent, having peaked a few days earlier at a new record high of 1057c/kg. 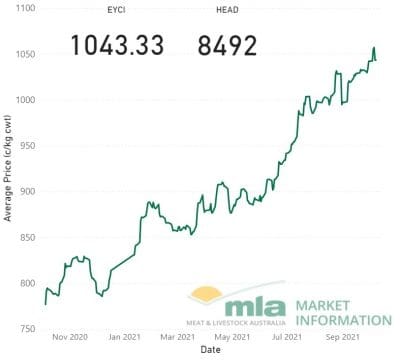 The seven-day throughput declined 34 percent this week to 8492 head – largely on the back of last weekend’s rain – the lowest volume recorded since June this year. Large centres like Roma’s Tuesday store sale were well down in numbers, accounting for just 1911 EYCI-eligible cattle this week.

The only sale in the seven-day rolling average that failed to crack 1000c/kg average for EYCI eligible cattle was Warwick’s Tuesday sale, with some centres soaring to new record highs. The 320 eligible weaner and yearling cattle offered at Scone this week averaged 1213c/kg, while Singleton’s contribution of 300 head averaged 1123c/kg.

Continued rainfall and less sales going ahead due to Monday’s public holiday have dented supply this week, contributing to the EYCI continuing to break new ground.

As the BOM eight day forecast published below shows, more rain predicted across much of the eastern regions of Queensland, New South Wales and Victoria over the next week, with falls of 15-50mm likely to be common.

This could add further pressure to cattle prices in the coming period if the outlook comes to fruition, Meat & Livestock Australia said this afternoon.