Independent cattle and beef market analyst Simon Quilty has delivered presentations at a number of beef industry gatherings in recent weeks, stretching from Tasmania to Wagga. Here’s his latest take on what lies ahead for cattle prices…

INDICATIONS suggest the current Australian cattle cycle has almost run its full course – no different to what the United States beef industry did two years ago.

What is critical about Australia’s current herd liquidation stage is that it is occurring in a much younger herd this time around, that is seeing quality younger cows going to slaughter compared to the previous drought in 2014 and 2015 when the beef herd age profile was older, due to cow retention after two earlier very wet years.

To me, this points to a stronger and longer-lasting rebound that will be more dramatic on the uptick (should it be a two-year drought or longer), as it will take longer than normal to bounce back if the industry has liquidated good quality younger females. My belief, expressed earlier, that the EYCI may trade closer to 750 ac/kg or higher next year (see earlier report) is not unreasonable.

The Australian cattle market, I believe, is getting close to completing its current price cycle, and it would seem to me that October is the likely end-point, or market low. That might vary by a month either side, but given that the drought has worsened in recent months and may well extend into next year, it would not be unfair to think that Australian cattle prices would trade lower next year if the drought worsens.

I do not believe this will occur, but instead the market after October is more likely to trade sideways, or even higher, due to the old adage, ‘You can only kill them once.’

The purpose of this report is to outline why October, I believe, is the potential price low-point; what impact drought will have from here; and more importantly, explore the ‘new era’ in pricing.

Firstly, some points to note:

It should be noted that the EYCI definition is a broad cattle definition including vealers, yearling steers, yearling heifers and steers, C2 or C3 with liveweights greater than 200kg. The indicator monitors 24 cattle types from 26 prime saleyards in Queensland, NSW and Victoria. So a falling EYCI may occur due to light feeder steers falling in value, while heavy feeder steers may still hold steady or increase in value. This is because of the increased numbers of cheaper lighter feeder steers pushing the overall value of the EYCI lower.

Characteristics of the Australian cattle cycle – Have we entered a new era in pricing?

The following graph highlights just how significantly higher this current cattle cycle is to any previous one in Australia, with cattle prices on average 60pc higher than any previous price high.

It is not until this pricing cycle is completed that I can with confidence say that Australia has entered a new pricing era for cattle. I do not believe cattle prices will return to the depths of previous pricing cycles, and this is due to global beef prices being so strong, having remained on a reasonably steady increase since 1998 (see graph below). Global beef prices have increased 2.5 fold since then, with an unprecedented record high in cattle pricing of 725c/kg CW in October 2016 – a number that I am confident will be surpassed in the future.

The key to this increase in cattle prices has been global beef prices, but in particular Australia and the US global prices which I have used to calculate using a weighted average price in this graph.

It’s important to combine US and Australian prices, because we overlap markets by 93pc, including the US domestic market – in other words, we compete head-on with each other and therefore influence each others’ pricing in most of these markets.

No other country has this same degree of influence on supply and pricing as the US does on Australia,  all year round (it could be argued New Zealand impacts Australia’s lean beef pricing in the US market for 3-4 months per year, but US domestic pricing plays a greater role during this same period). It is the combined weighted impact of US and Australian global beef prices that ultimately impacts Australia’s cattle prices.

When looking at the previous three cattle cycles and the one we are currently in, there are some common characteristics.

Firstly on average, each cycle lasts 47 months (if the estimate of this October being the end of the current cycle proves true). They have all had varying periods of reaching the high-point, but invariably all finish at close to 47 months in duration.

The peaks in pricing have been wide-ranging, between 48pc and 119pc higher, but the falls from the high have been more consistent (33pc-42pc). The current cycle, if my estimate of a bottom of 435c/kg is correct, would equate to a 40pc fall, which is close to an average of the previous cycles.

When I re-align the indexes of 2014-2018 cycle with the other previous lower value cycles, it gives a clearer picture I believe of where the potential finish is. In previous cycles drought has also played a role at various stages through the 47 months duration, but the liquidation and rebuilding phases would always occur. Drought and rain, to me, impact the potential highs and lows in prices but so often the duration remains much the same.

Should the cattle cycle finish in October this year, I believe that it signifies a ‘new era’ of pricing, as the rebuild stage will see a tightening of cattle and that the low at 435c/kg (if this estimate is correct) surpasses any of the previous highs of the last three cattle cycles with 2009-2013 having the high of 419c/kg. As stated earlier, it is the strength of global beef prices that has ensured this change in pricing structure.

Last week the ABS figures came out for May slaughter figures and it showed that the female kill in Australia increased from April, and now sits at 53.2pc of the total kill. That figure now exceeds the severity of both May 2014 and 2015 droughts – these were critical years in liquidating the herd, that saw the Australian cattle population fall in 2014/15 by 1.7 million head and in 2015/16 by an additional 400,000 head.

The increased female kill has been reflected in Australia’s global shipment volumes which have jumped by 15,000t in recent months, with an estimated July shipment of 109,000t likely.

Is October the low in Australia’s cattle pricing and when will the next cattle cycle commence?

What defines the start and end of a cattle cycle is the rebuilding and liquidation stages in the herd, which is reflected in the pricing of cattle.

The peak of rebuilding often sees the peak of the cattle prices, like the 725c/kg seen in October 2016, when producers are strongly incentivised to maximise joinings and cattle numbers are almost at their peak. Female kills at this point in the cycle are at an extreme low, on average at 41pc of the total kill. The low in a cattle price cycle is at the peak point of the liquidation phase, when the herd has shrunk in size and the rate of female slaughter reaches a peak of 53-55pc – I believe October is this point for Australia.

Ongoing drought will delay the start of the next cattle cycle, which will commence in earnest when rain comes – so cattle prices might move sideways, but I do not see a lot of further downside in cattle prices if October proves to be the low in pricing.

As stated above, the reason is that ‘you can only kill them once,’ and even though kills continue at a high level, the number of females gets less and the core breeding herd is retained.

This was seen in 2014-2016 where the herd continued to fall in size due to drought conditions in 2015 but the low in cattle prices was 2014. I see this current cycle no different – should the drought last two years, the low in pricing will be October (or close to) this year. 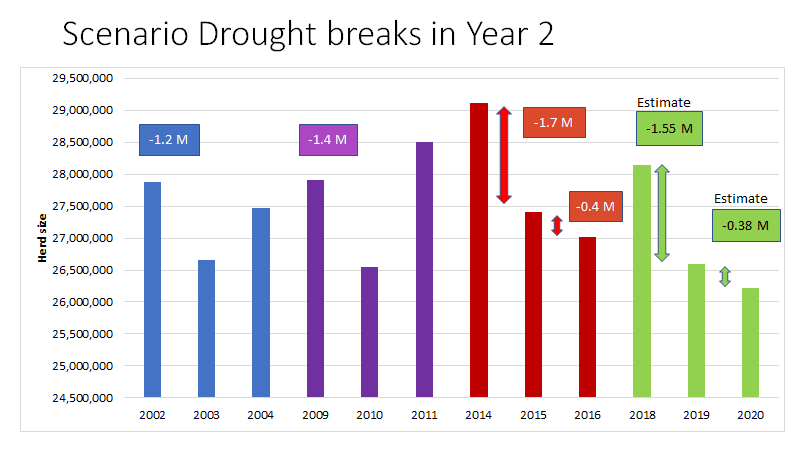 Does this create the greatest buying opportunity ever?

Does this create the greatest buying opportunity ever? I think this is best answered with a cautionary tale on what looks like a bargain today which could prove to be a costly burden tomorrow – because without rain and the cost of feed at $400 per tonne, the cost of holding these cattle (should rain not come) could prove very expensive.

So cattle prices may have bottomed, but importantly they may move sideways for some time, until rain comes. The cost of maintenance feed during this period could exceed any small upward price movement. So the buy-in price might seem cheap, but that is for a reason – there is so little feed about and any maintenance ration is very expensive. Once again, I reiterate these are my personal views, and others may see more downside or upside than what I have outlined – that is why it is critical to seek advice from your agent and/or cattle advisor.

As highlighted in previous columns in this series, there is an uncanny resemblance between Australia’s cycle and the US cattle cycle trend that has a two-year delay – and this trend has not changed. This has been driven potentially by the fact that the US had a severe drought similar to Australia two years prior to our own, proportionately a similar liquidation and rebuild phase and the US was also exposed to strong global prices.

I think the last key point is that four-year cattle price cycles are not unique to Australia, but occur in herds all around the world. In this instance, the stars seem to have aligned with the US herd for that period of time – this may not occur again for many, many years, but for the moment both cycles are very similar and look likely to finish in a very similar manner.