CATTLE numbers remained high on AuctionsPlus this week, with 11,278 head listed – about 500 less than the previous week.

Most steer and heifer descriptions were moderately higher in price, with the exception of heifers less than 250kg which eased about 20c/kg on average.

Joined females sold this week averaged of $1437, with the top price of $1675 for a line of Murray Grey cows out of Wellington, NSW. These Woodbourne & Waroona blood cows were PTIC to Murray Grey bulls, and will be heading to Wodonga, VIC.

A high supply of cows and calves was met by strong demand, with 73pc of lots offered finding buyers. Prices averaged $1925, with a top of $2640 for a line of Millah Murrah blood Angus cows 743kg at four years of age with Angus calves at foot. The cows from Condobolin, NSW will be going to Yea, VIC.

Heavyweight Hereford cows averaging 693kg, ranging from 4-10 years old, with 1-3 month old calves at foot out of South Australia sold to a top of $2020, moving to Millicent, SA.

Unjoined Hereford heifers weighing 412kg from Uranquinty, NSW sold for $1370 or 333c. These 12-14 month old Yavenvale blood heifers are heading north to Wagga Wagga, NSW. Further highlights among heifers include a line of Droughtmasters out of Winton, QLD which sold for $710 or 332c. These Bernborough blood heifers averaged 214kg, and are heading to Blackall, QLD.

Top priced cows this week at $1675 was this line of Murray Greys out of Wellington, NSW PTIC to Murray Grey bulls, heading to Wodonga, VIC.

A good selection of steers were on offer this week, with prices ranging from $695 to $1440. Top price went to a line of Angus feeder steers out of Holbrook, NSW, 16-18 months old, 473kg which found a buyer in Albury, NSW.

A line of 9-11 month old Yulgilbar and Eidsvold blood Santa Gertrudis steers 288kg out of Ironpot, QLD also sold well at $1156 or 401c,moving to Roma.

Three lots were offered out of Tasmania this week, with two clearing their reserve. The top price came out of Waterhouse to a line of 20 Angus heifers 14-15 months, 373kg, bred from Quaterways Angus bulls, heading to Edith Creek, TAS. 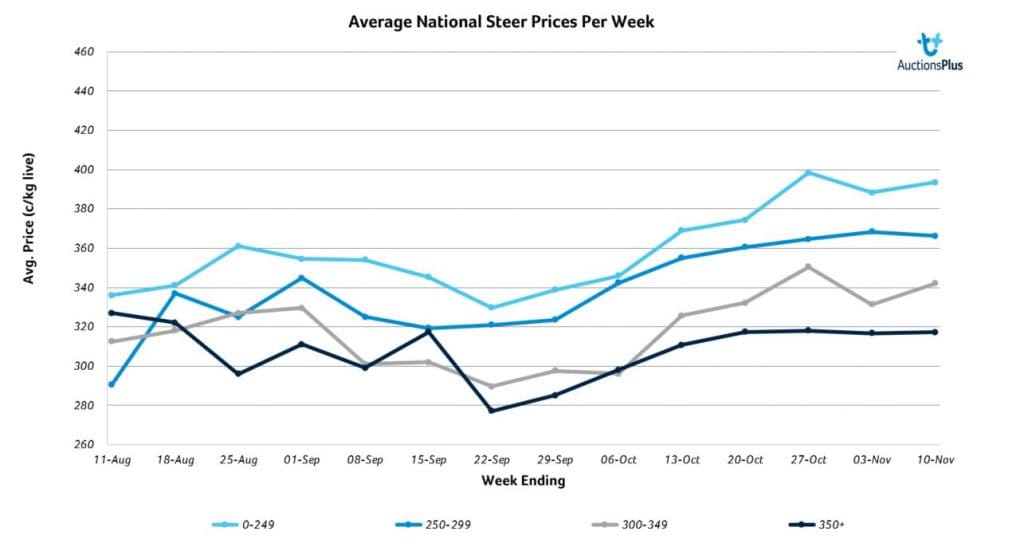