A SECOND weapon in the red meat industry’s response to reducing methane emissions is preparing for launch in Australia, following extensive testing.

On top of progress being made in the development and commercialisation of a methane-reducing feed additive based on red asparagopsis seaweed, the use of a separate feed additive Bovaer (3-NOP) was recently evaluated as part of project on reducing enteric methane emissions in Australian feedlot operations, and was found to reduce methane production by up to 90pc. 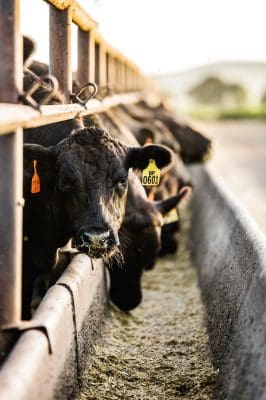 An MLA-funded trial at the University of New England tested Bovaer at different inclusion rates, and is linked to the Australian red meat industry’s target to be carbon neutral by 2030.

Beef Central first wrote about the encouraging prospects for methane reduction found in the Bovaer compound in this article published in 2019.

Developed by Dutch firm, DSM, Bovaer (3-NOP) was evaluated for the first time under Australian feedlot conditions under the supervision of Professor Roger Hegarty and Dr Amelia De Almeida.

Twenty Angus steers were provided with different rates of Bovaer, ranging from 0.5g up to 1.25g a day over 112 days in a typical Australian feedlot finisher ration.

At the lowest rate, a methane reduction of 60pc was observed, and at the highest inclusion rate, methane emissions reduced by 90pc.

Steers in the study had average daily gain and feed conversion ratios in line with industry expectations, with treated steers performing as ‘good or better’ than control steers in these performance parameters.

Professor Hegarty said he had seen overseas research about Bovaer, and was curious how the product would perform under Australian conditions.

“We’re excited about the strong results, and we’ll continue to research how to bring this product to more extensive operations,” he said.

“We look forward to bringing Bovaer to market in Australia in the near term. These exciting results are an important building block in that journey,” he said.

The full results of the research will be published in a scientific peer-reviewed journal in coming months. Planning is underway for further scaled trials with the support of MLA, as well as discussion on inclusion in carbon accounting methodologies and sustainability frameworks.

DSM is preparing for a launch in Australia, as of one of the first markets globally to have access to the product.