Numbers crunched yesterday produced an unprecedented loss of $205 for a typical feeder steer going on feed for a 100-day program today, and exiting the feedlot for slaughter in late February.

While this year’s record surge in ration ingredient prices has served to drive recent trading budgets deeper into loss territory, up until recently that was being moderated by softer feeder cattle prices.

Today’s trading budget loss comes on top of a $140 loss seen in our previous report this time last month. The previous worst result was a $155 loss reported in February, when feeders were worth 280c/kg; ration price was $370/t; but most significantly forward-sell grainfed carcase price was just 500c/kg due to tough global meat trading conditions.

October rain across parts of Queensland and NSW has firmed the market for feeders and all young cattle, as reflected in a 40c/kg lift in the EYCI since early October. General shortage of heavy feeders (not uncommon at this time of year, regardless of season) is another factor.

Despite some particularly hot weather this week, young cattle at Roma sale this week were fairly resilient, with the exception of heifers which came back a little.

Today’s feeder price of 305c/kg values our 450kg feeder at $1372, a sharp $112 rise from early October prices. Lotfeeders typically do not want to go into a low supply period over Christmas without adequate numbers around them.

While ration prices applied for today’s report are back $10/tonne to $470/t, they remain uncomfortably close to our August report’s all-time record of $500/t, which came at a time when public opinion about the drought was fuelling pricing sentiment.

Downs wheat was quoted by traders this morning at $455/t, back about $10/t on a month ago, due to a little harvest pressure, with barley a little easier at $430/t. The January-June market delivered Downs is around $440-$445/t.

Ration quotes from Darling Downs feedlots on Friday were still in a broad range, from $470-$500/t for finisher ration, depending on ration ingredients and location.

Today’s quoted ration price has seen the total feeding cost per beast in our calculation ease a little to $740, but still $90 more than our early July figure, when total feeding cost was still only $650/head, based on rations worth $415/t before the worst of the grain price rises hit.

Cost-of-gain in our latest calculation is 351c/kg, down 8c/kg from last month’s report and 22c/kg less than the all-time record ration price in August. For better-performing animals gaining at 2.2kg/day instead of our standard 2kg ADG, cost of gain drops to 319c.

All that gives a total production cost per beast (using the variables listed at the base of this page) of $2216, up $100 from our early October calculation. Today’s figure is drawing closer to our record production cost of $2231, reported back in July 2016, when the projected breakeven figure was 632c/kg.

All the above variables deliver a breakeven in our latest budget on our chosen feeder steer of 628c/kg – 28c/kg higher than our last report in early October, driven by the sharp rise in feeder price, and persistent high ration prices. The all-time record breakeven figure record was 632c/kg back in July 2016, driven by extremely high feeder cattle prices at the time around 360c/kg liveweight.

The forward price figure continues to edge up towards the all-time high in this series of 600c/kg seen back in July 2016, when supply got very tight. Processing margins apparently remain solid, rather than outstanding, with global demand and favourable currency movements helping maintain some momentum.

As we indicated in our introduction, a 570c/kg forward slaughter price for late February delivery suggests a loss of $205 a head on today’s trading budget, $65/head worse than a month or so ago.  The sharp rise in feeder price, and still very high ration price has overwhelmed any benefit from a rising slaughter cattle price (see graph below). 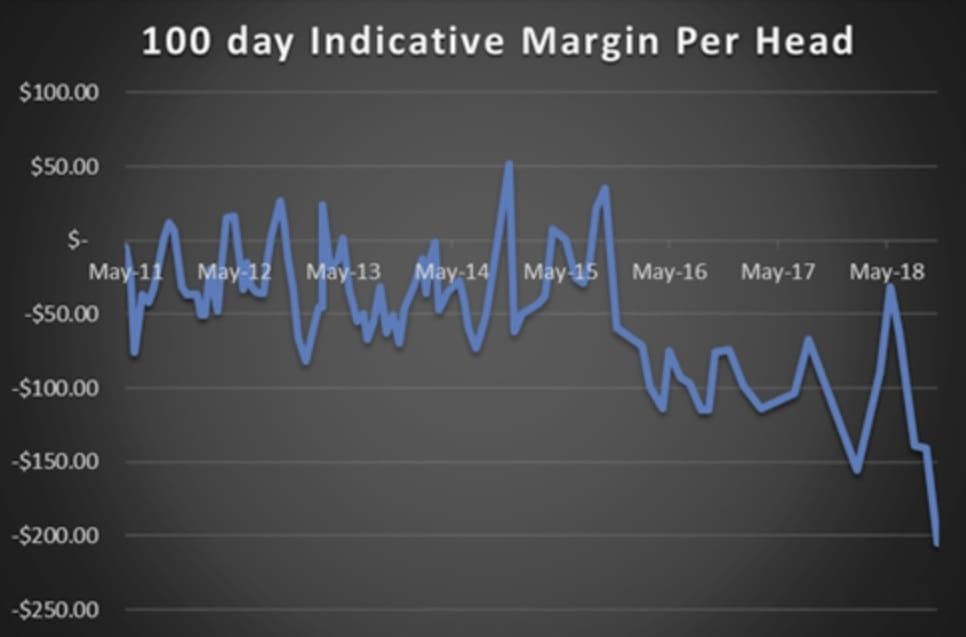 One of the features evident in the graph above is that there are two distinct cycles that have happened since this calculation started in 2011. The first runs from May 2011 through to early 2016, when trading budget results ranged from modest profits to relatively modest loss (average over the period: $28 loss). The second runs from early 2016 to now, where losses (with the exception of May this year) have been consistently recorded, and in fact have intensified. The average trading budget loss over this period has been $100/head.

This adds weight to the theory that processors may have to dig deeper to sustain numbers on feed during 2019.

Could finished grainfed cattle prices rise above 600c next year?

Assuming global meat markets hold together over the next six months, it’s starting to look like forward export slaughter cattle prices north of 600c/kg might be on the cards some early next year, because numbingly high ration costs are unlikely to ease any time soon – barring grain imports.

Carcase price offers below that may see feedyards lose interest in placing larger numbers of export cattle on feed, given the recent sequence of trading losses evident in the graph published with this report.

As always, continued drought will play a part in that, but there’s an expectation in some circles that processors may have to ‘incentivise’ feeder placements a little more strongly early next year.

Cattle contracted earlier for October/November slaughter were on contracts worth around 540-550c/kg. In comparison, the current spot market for 100-day grainfed ox for southern Queensland slaughter is around 570-$580c/kg, on the back of rain and tightening of supply, suggesting processors are currently around $106/head better off on cattle they procured earlier, on forward contracts.