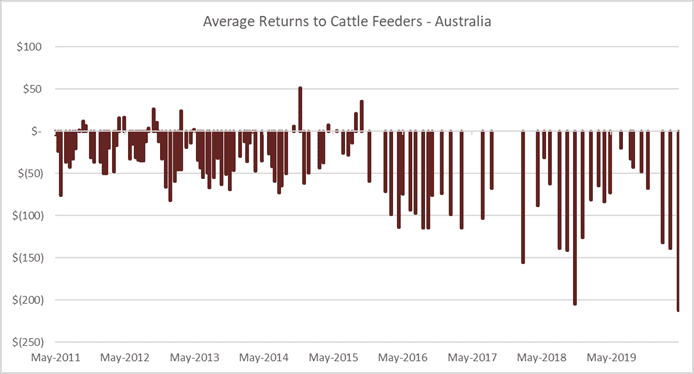 Wild swings can be seen in both feeder cattle and forward contract finished cattle prices since our previous breakeven calculation, published back on March 23.

As can be seen in the graph above, the end result is a record forecast loss of $212 in today’s budget, based on our standard set of variables, for our typical flatback heavy feeder steer entering a Downs feedlot today, and closing-out after 105 days on feed in early August.

The business of feeding and marketing grainfed cattle is complex enough at the best of times, but the current COVID-19 environment is bringing a suite of new challenges to bear that stakeholders have never previously contemplated – and its being reflected, to some extent, in volatility in some of the calculation’s key variables.

While global food service markets remain in considerable difficulty, some grainfed export beef markets remain in reasonably good shape, paying good money – but the current challenge lies in simply getting product into those markets, with logistical and cold storage issues at port.

For today’s budget, we have plugged-in feeders unchanged at 345c/kg. There are quotes in the market this week for steers matching our spec for 355c, but equally, some Downs yards are still quoting 335c.

Current heavy feeder supply was described by some large lotfeeders this morning as ‘really tight,’ as drought impact from last year continues to exert an influence.

But today’s figure of 345c does not capture what has happened since our previous budget calculated six weeks ago. During the depths of the loss of market confidence over COVID-19 last month, feeders crashed dramatically from 375c in mid-March to 310c/kg in a matter of weeks, as lotfeeders basically withdrew from re-filling pens, once they closed out. Some very large Darling Downs yards did not quote at all for two or three weeks, due to lack of confidence in what lay ahead.

But feeder prices have since mounted a fair recovery, effectively rising 35c in a matter of weeks, as grainfed supply chains start to gather confidence that markets are being slowly restored.

The broader feeder price trend can be seen in this graph, produced by MLA this morning (note: these are lighter cattle than our 450kg upper limit spec)

Ration price for today’s budget stays the same as last time, at $475/t.

A big differential still exists between wheat and barley, with most yards currently basing rations on cheaper barley, which carries a current price of $374/t Downs, whereas wheat remains north of $400/t.

Looking ahead, barley delivered Downs January-June is quoted at $275 – about $100 less than today’s price. New season grain should not start to appear until November, however.

Today’s ration price delivers a total feeding cost of $736, and total production cost around $2400, down from $2538 last time, due to cheaper feeder cattle.

Cost of gain is calculated at 351c/kg, and for a better-performing animal gaining at 2.2kg/day instead of our standard 2kg/day, 319c/kg.

All that leaves today’s breakeven figure on our standard beast at 680c/kg.

For today’s budget we have quoted 620c/kg, down a massive 60c from the 680c/kg quoted in our previous budget published back on 23 March. In fact forward contract prices fell even further a week or two ago, dropping as low as 600c/kg before starting to rise again.

Processors appear to have escaped the worst of the covid market disruption impact, bringing back finished grainfed cattle prices sharply by 80c/kg in just 5-6 weeks, which has helped preserve their meat trading margins. Currency movements haven’t helped, though, with the A$ now 14pc higher than where it sat in mid-March (56c), reducing competitiveness of Australian export beef.

Given our breakeven figure of 680c/kg calculated above, today’s forward contract bullock slaughter price represents an all-time record loss in today’s trading budget of $212 a head – down from negative $139 last time. Only once before has losses crept above $200, reaching $204 in November 2018. On the better performibng cattle gaining at 2.2kg/day, the loss reduces somewhat to $143.

For grainfed cattle forward-bought back in February for slaughter this month, their contracts were typically around 680c/kg. Today’s spot price on processor grids for 100-day grainfed slaughter in coming weeks are 610-620c/kg. That suggests processors are currently at least 60c/kg out of the money on forward-contracted cattle being killed this week, versus cattle brought out of the spot market.

Beef Central’s regular 100-day grainfed trading budget scenario is based on a standard set of representative production variables, ex Darling Downs. The trading budget should not be interpreted as a comment on the viability of the lotfeeding sector – it is simply a comment on the viability of the exercise of a beef producer buying feeder steers, sending them to a feedlot for custom-feeding, and then selling them at the expected grid price at an abattoir. The opportunity costs of the exercise are often missed by producers. The trading budget summary is built on a feeder steer 450kg liveweight, fed 105 days; 356kg dressed weight at slaughter; ADG of 2kg; consumption 15kg/day and a NFE ratio of 7.5:1 (as fed); $25 freight; typical implant program. Bank interest is included. It is important to note that variations exist across production models (feed conversion, daily gain, mortality, morbidity, carcase specification); from feedlot to feedlot; and between mobs of cattle. Equally, there can be considerable variation at any given time in ration costs charged by different custom-feed service feedlots. Click here to view an earlier article on this topic. For a more specific performance assessment on a given mob of cattle, consult with your preferred custom feeder.