PERFORMANCE Feeds has expanded its capacity to produce liquid supplements for the feedlot sector with the opening of its new plant at Dalby on the Darling Downs of southern Queensland. 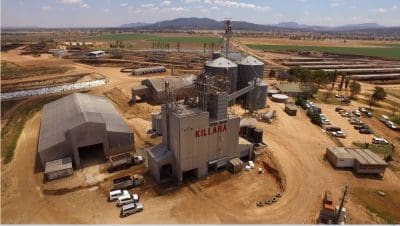 Opened in June, the Dalby plant will exclusively service the feedlot sector, and take some production pressure off the company’s existing plant at Kingsthorpe, 70 kilometres south-east of Dalby.

“About three years ago, we decided to build Dalby because things at Kingsthorpe were just so busy,” Mr James said.

“Kingsthorpe will keep doing about a third of our feedlot production, and Dalby will do the rest for the customers we’ve been servicing from Kingsthorpe.”

The Dalby plant is located near the eastern edge of Australia’s biggest concentration of cattle on feed.

It is expected to service clients in Queensland’s Burnett, Maranoa and northern and western Downs regions, and New South Wales as far south as the Liverpool Plains.

Performance Feeds’ base ingredient is molasses, which it sources from Queensland sugar mills, and Mr James said the company worked with consultant nutritionists to formulate each customer’s required blend.

Its first Australian plant was built at Kingsthorpe in the 1990s, followed by the Brandon plant, in the Burdekin district of North Queensland, in 2000, and the Kyneton plant in Victoria, in 2006.

The Dalby plant will employ five staff, including supervisor Gavin Close, who has transferred out from the Kingsthorpe plant.

Performance Feeds is one of Australia’s major liquid-supplement suppliers, and is owned by the US company XF Enterprises , based in Amarillo, Texas.

“For the companies manufacturing for the feedlots, occupancy has hit another milestone, and all those drought-affected animals are coming into the feedlot, so there’s more demand,” Dr Lawrence said.

He said the adjusting of liquid-supplement composition and inclusion rate offered an easy lever in the ration mix at a time when roughage and grain specifications were widely variable because of the drought.

“Liquid supplements provide a lot of flexibility, and molasses has been available at a lower price than grain.

“It gives feedlot operations more control over inclusion because it’s pumped and you don’t get the losses you can with bulk loading and augering, and you get better dispersion in the ration.”

Dr Lawrence said most operators, regardless of size, who were continually lot-feeding cattle were using liquid supplements in their mixes.