FEEDER cattle prices have come under considerable pressure during the opening stages of 2023, with both paddock trading and saleyards channels exhibiting sharp rates of decline.

This continues a trend seen during the closing stages of 2022, as highlighted in this earlier Beef Central article. Bids in the southern Queensland market for flatback heavy feeders this week are around 390-400c/kg, with some bids below 390c. That’s back from around 420c/kg in early-mid December last year, and 460-480c/kg only a few months before that.

It means many heavy feeders have now lost close to $450 a head in value in the space of three months. Premiums for lighter feeders and backgrounders are at least ten percent above those heavy feeder rates.

Both opening Roma and Dalby store sales on Tuesday and Wednesday this week reflected the trend, with lighter and heavy feeders sharply down on prices seen late last year

It’s not all uncommon for processors and feedlot buyers to attempt to ‘re-set the clock’ in terms of livestock pricing after the Christmas break, and that appears to be the case this week for both slaughter cattle and feeders.

Uncertainty about the outlook for grainfed beef in coming months, with strong and sharply priced competition out of the US in international markets, and China struggling with an enormous COVID wave at present, has driven current feedlot buyer sentiment. On top of that, there is again a lot of meat built up in cold storage due to flat export trading conditions.

That has taken a lot of urgency out of the buyer market, Beef Central was told by supply chain managers yesterday.

On the feedlot input side, new season grain prices remain surprisingly strong, with quotes around $405/t for feed wheat, prompt delivery ex Downs this week, unexpectedly up around $20/t. Some of that may be due to most grain producers’ balance sheets, with no motivation for aggressive selling.

Using a finished ration price around $460/t and an ADG/conversion performance based on 2kg/day eating 14kg of ration (DM basis), and a 400c/kg feeder steer procurement cost, it suggests a cost of gain around 320c/kg and breakeven this week on a typical 100-day program around 740c/kg.

On the sell-side of the equation, forward contracts on 100-day cattle due to close out April, week three, have now fallen to around 720c/kg, drifting further from 750c/kg late last year. It means that while there has been some relief for lotfeeders in current feeder procurement costs, that’s been nullified, to some extent, by lower finished cattle prices and higher grain prices.

Spot 100-day cattle for processing in the next week or two are currently around 690c/kg, down from limited business at around 750c/kg late last year.

Given the current grainfed forward contract rate in southern Queensland around 720c, it suggests a current trading loss on a typical flatback heavy feeder in a downs feedlot of around $71 a head.

One heavily-invested supply chain manager thinks the feeder market is over-sold at this week’s low rates – possibly by as much as 5pc. He thinks a 450kg feeder trading this week at 390c/kg, worth $1755, is perhaps worth closer to 410c, or an extra $88 a head, once the new season market supply/demand takes better hold.

“It’s a screaming buy at current rates, but there is likely to be some recovery in prices heading towards February – especially if there is a rain change after a couple of hot, dry weeks,” he suggested.

Helping underpin that view has been the rise in US cattle prices during the back end of last year, helping improve Australian beef’s competitive position in world markets a little.

December numbers on feed likely to be back

With December quarter cattle numbers on feed data being collated in coming weeks, there’s some anticipation emerging that numbers may be back.

That’s due mainly to the decline seen in forward contract bids, and some withdrawal of grainfed bids altogether from grainfed processors towards the end of last year as grainfed export meat trading conditions deteriorated. If so, the one million head on feed mark might be challenged for the first time since 2018. 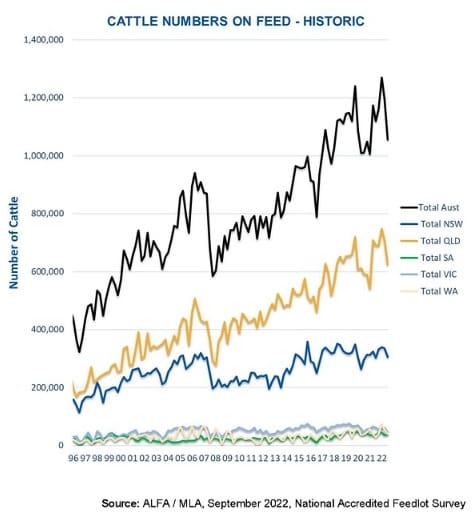