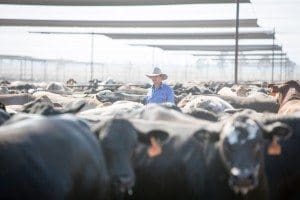 The tightening supply outlook for cattle and increasing global demand for protein is prompting some of Australia’s biggest supply chain managers to adjust their procurement strategies, which for some involves forming closer relationships with family-scale cattle producers.

Australia’s fourth largest lotfeeder Mort & Co has made a decision to source an increased number of cattle at lighter backgrounding weights (200-300kg) and to form long-term strategic partnerships with family-sized operations to grow them to feedlot entry weights of 380-480kg.

That requirement is set to grow further as the company expands its feedlot infrastructure.

As reported in Beef Central’s recent Top 25 Lotfeeders feature, Mort & Co has recently approved stage 1 of the expansion of its Grassdale feedlot near Dalby, which will take the facility from its existing capacity of 35,000 head to 40,000 head.

Ultimately Grassdale has approval to increase its carrying capacity to 58,000 head, which would establish the site as the single largest feedlot in Australia – slightly larger than NH Foods’ Whyalla feedlot.

In addition, an expansion of Mort’s Pinegrove feedlot near Millmerran is also planned.

Despite sufficient numbers of feeder cattle currently being supplied to Mort & Co, it believes that intensified competition for limited numbers of heavy feeder weight cattle is ‘just around the corner.’

“This provides an opportunity to form long-term partnerships with family-scale cattle producers to grow those cattle out to our desired feedlot entry weights,” he said.

Under the arrangement, Mort & Co will pay producers on a weight-gain basis. Participating producers will also have the option to access cash flow via a weekly agistment payment, which would be paid monthly in arrears.

As with most backgrounding arrangements, the producer would be responsible for the labour involved in managing the cattle, maintaining infrastructure and providing supplement if required to keep cattle gaining weight – which is what they will ultimately paid on.

However Mort & Co has included an induction payment to assist with the labour associated with the processing of cattle on arrival to the property.

Mr Reynolds believes the concept should appeal to landholders who have grass or crop available, but who are also faced with a significantly higher capital outlay associated with the current cattle market. He also believes that these historically high prices pose a greater level of price-risk once purchased stock reach saleable weights.

“We see this as an opportunity for graziers to create cashflow, redirect their available capital to service debt or into other ventures and potentially minimise the risks associated with entering the cattle market at historically high levels,” he said.

Performance-based backgrounding structures like the one proposed by Mort potentially provide producers with the opportunity to generate a greater return from taking cattle on a backgrounding basis ($/kg gained) as opposed to traditional agistment ($/head/week).

It is also proposed that the backgrounding model would be geared to reward producers who are able to provide superior management, excellent infrastructure and long-term secure production offering of surety of weight gain.

“Our objective is to target producers with access to better performing country. This enables us to complete more cattle turnovers per annum, while also limiting the market price-risk associated buying and selling into markets that are further apart,” Mr Reynolds said.

Given the current cattle market, there was also a ‘fair argument’ that cattle owners could potentially pay graziers more than $1.50/kg of liveweight gain, compared to traditional backgrounding rates closer to $1.10/kg.

Similarly, if that same producer can put on 100kg they will achieve $150/hd of income which is an additional $40/hd higher than historically achievable,” said Mr Reynolds.