THE grainfed sector will be less affected than grassfed beef in turnoff during 2016, MLA’s 2016 Cattle Industry Projections released this morning indicates.

The number of cattle in Australian feedlots is expected to decline from an estimated 960,000 head in the December quarter last year to 900,000 head by December 2016.

While this still represents a 6 percent decline – largely influenced by an even larger reduction in the national cattle herd – numbers on feed will still be significantly above the pre 2014 drought five-year average of 800,000 head.

Supporting the relatively large number of cattle on feed will be the desire for processors to limit the impact of fall in cattle slaughter on beef production, thus looking to secure heavier animals in a more consistent manner, MLA’s Projections suggests.

The expected record cattle prices will also provide producers with the incentive to enhance weight gains. This was a trend seen in the US during the 2016 cattle price peak, as a means of offsetting the lowest herd seen in the US in more than 60 years. 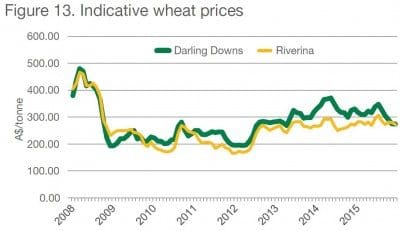 One of the most influential feedgrain markets on global prices is US corn, where yields were the second largest on record in 2015. The forecast area to be planted in 2016 is anticipated to be near the levels seen last year.

One of MLA’s contract analysts, Steiner Consulting Group says the well supplied grain markets should see prices at similar levels to 2015, or even lower.

The challenge for many Australian feedlots will be the price of feeder cattle, relative to the price received for finished stock.

“Considering this jump was with very little competition from restockers and there were relatively large numbers available, it may be that this price will not drop significantly – if at all – during 2016,” chief analyst Ben Thomas said.

For a finished article, the Queensland 300-320kg over the-hooks 100-day grainfed steer indicator averaged 510¢/kg carcase weight in 2015, up 28pc from the previous year.

Considering this lift was less than what occurred for cattle entering lots, margins may have narrowed, particularly in the final months of the year. This trend was clearly evident in Beef Central’s regular 100-day grainfed trading budgets published in November and December.

Looking forward, however, MLA says grainfed grown steer sale prices should be assisted by the forecast weakening A$, expected to be below US70¢ for the majority of 2016.

“On balance, high fed cattle prices, the desire to maintain beef production and relatively lower feedgrain prices should see the number of cattle on feed stay above 900,000 head during 2016,” Mr Thomas said.

While overall Australian beef production is anticipated to decline 13pc in 2016 to 2.2 million tonnes, this is less than the estimated fall in slaughter for 2016, as a result of a 3pc (7kg) year-on-year increase in the average carcase weights, to 286kg.

The heavier carcases will be in response to a greater proportion of lighter northern cattle being live exported rather than processed, better feed conditions and lower stocking rates, a higher ratio of cattle on feed, and the expectation of fewer females slaughtered.