Loss eases, but still minus $88 in latest grainfed trading budget

BEEF Central’s latest 100-day grainfed trading budget calculated this morning shows a marked improvement on our previous assessment, but a loss of $88 a head is still painful result, in anybody’s language.

Highlighting the difficult trading conditions for lotfeeders over the past 12 months driven by elevated grain prices and feeder prices, our previous breakeven calculation in February produced a record trading loss of $155.

These calculations are based on our standard set of variables (refer details at base of page) which has been in use since this data-set started in 2011.

Today’s $88 loss result is based on a flatback feeder entering a typical Darling Downs feedlot today, and closing-out for slaughter after 105 days, exiting mid-August.

For today’s calculation, we’ve allocated a feeder purchase (flatback, 450kg) price of 280c/kg. That’s identical to our previous February report, but in between, the market for feeders meeting our spec in Queensland lifted to around 300c/kg (on the back of March rain, which tightened supply) before settling again.

Significantly, there’s a large price gap emerging at present for Angus feeders over ‘generic’ flatback crossbreds, which we’ll discuss in a separate item in coming days.

Today’s feeder price is close to the lowest figure we’ve published for this report series since July 2015, just as the big surge started in store and finished cattle prices across Australia. It did get to 290c/kg for a brief period around August last year. At its peak in June 2016, flatback feeders fitting our description were worth 360c/kg, peaking in between our reports at 370-380c. That means a feeder purchased today is worth $270 less than it was at the market’s 2016 peak.

Before we provide the rest of today’s breakeven result, let’s change focus for a moment to have a look at comparisons between the current feeder steer market and the EYCI’s performance.

Looking back at April last year, our milk-tooth feeder was worth 315c/kg, representing a drop of 11pc since then. But the EYCI, over the same period, has retracted 152c/kg (dressed weight) – a drop of 24pc.

Why the big disparity? It suggests the EYCI is currently being hammered by dry weather in the south, and the general lack of demand for light cattle; whereas the competition in feedlots, and the shortage of heavy feeders (plus profitable trading for meat processors for the past few months), is preserving the feeder price much better.

Another underlying factor in current feeder pricing is processors seeking volume ‘insurance.’ Buying feeders and backgrounders now means turnoff during the third quarter this year, which is widely anticipated to be a particularly tough time in terms of slaughter cattle procurement this year.

With desperately dry conditions extending across large parts of southern Australia, there is clear evidence of inflows of significant numbers of feeders and backgrounders out of areas like southern and central NSW into southern Queensland recently. At Carcoar sale last week, for example, two Queensland buyers alone were responsible for more than 1000 head (mostly backgrounders) out of a yarding of around 12,000 head.

The season in the south may be pushing some lower entry weights in feeders, some stakeholders have recently speculated, and there may also be more ‘black’ than usual in some northern feedlots at present, as a result.

Ration price for today’s report has been factored-in at $380/t – equal to the highest ration price we have ever seen in the eight years this report has been compiled. It hit the same figure during a short window in the 2015 drought year, during a period when quantities of southern grain were being trucked north to Queensland feedlots, at a freight cost of around $100/t.

Ration prices at these levels continuing to cruel any prospect of a positive trade on our 100-day grainfed steer budget – and reports suggest ration prices quoted by custom feeders are firming further this week, on the back of dry weather. In March last year, ration price was still around $300/t, before quickly rising through $340/t and $360/t around July.

Western Downs grain prices this week suggest around $360/t for wheat, up around $30/t on a month ago.

Australia is currently in sharp contrast with the rest of the lotfeeding world in pricing: historically high feedgrain prices and tight feeder supply propping up feeder values, while the rest of the world (i.e. US) currently has an abundance of cheap grain and feeder cattle. Save for high international demand which is helping absorb Australian product, it’s making it very difficult for Australian grainfed meat to compete on the world stage.

The record-equalling ration price in today’s report produces a total feeding cost of $595/head, and a total production cost (ration cost, plus feeder cost, and incidentals listed at the base of this page) of $1958, despite the softer feeder value.

Cost of gain for southern Queensland in today’s calculation is 284c/kg (276c in February), which is tracking line ball with feeder cattle price (see graph). 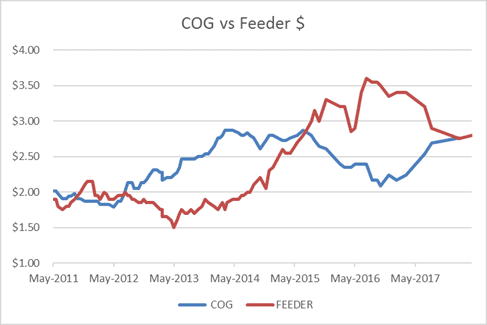 As the graph shows, that represents a big change from circumstances for much of last year, when COG was much cheaper than feeder purchase, on a c/kg basis. That inevitably encouraged some lotfeeders to select lighter cattle, and feed them longer, to maximise the benefit.

In March last year, for example, our breakeven included a COG of 209c/kg, based on a ration price of 280c/kg – a massive 67c/kg COG turnaround.

The above set of variables has delivered a breakeven figure in today’s calculation of 555c/kg (up 11c from 544c in our February budget), against a forward contract price for 100-day steer ready for slaughter mid-August of 530c/kg (although bids in the market this week range from as low as 515c/kg).

That comparison represents a loss of $88 on the trade, based on our standard set of variables.

As Beef Central regularly reminds readers, that result will vary somewhat, depending on performance of cattle and ration. While our chosen ADG of 2kg/day is representative of ‘middle of the road’ performance, for cattle performing 10pc better (2.2kg/day ADG), the feeding efficiency goes from 7.5: 1 to 6.82:1, meaning the breakeven drops to 538c – delivering a $28  loss on today’s budget.

The impact of that change in feeding efficiency becomes even more acute at times of extremely high ration prices, like today.