CATTLE on feed across Australia eased from record September highs, in the December quarterly industry survey released this afternoon.

Numbers eased by 51,572 head or about five percent to 973,176 head in December, falling below one million head for the first time since the March quarter last year according to the data released by the Australian Lot Feeders Association and Meat & Livestock Australia. 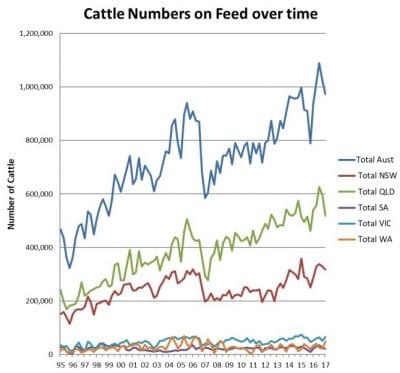 Biggest declines were reported in Queensland, down about 78,500 head, while New South Wales, the second largest lotfeeding state declined by 11,170 head. Victoria and Western Australia both reported increases, with Victoria lifting by 13,990 head and WA by 29,357 head.

Feedlot occupancy levels across Australia remained above 75pc at the end of December, down from 80pc three months earlier.

Reflecting results seen in Beef Central’s most recent grainfed trading budget, MLA’s chief analyst Scott Tolmie said the major indictors for feedlot input costs – the price of cattle and the price of feedgrain – had been unfavourable for lotfeeders in the last quarter, which had translated into lower numbers on feed.

“Good rainfall across NSW and Queensland during October encouraged stronger competition amongst restockers resulting in higher cattle prices. The national saleyard feeder steer indicator closed 2017 at 307¢/kg liveweight, representing a 37¢ (or 14pc) increase from where it finished in the September quarter,” Mr Tolmie said.

The effects of the poor 2017-18 winter harvest due to well below average winter rainfall resulted in wheat ex Darling Downs averaging $323/tonne, while barley averaged $317 for the December period, an increase of 48pc and 68pc year-on-year, respectively.

Mr Tolmie said despite pressure on the input side, the price received for finished cattle held up well in December, with the Queensland 100-day grainfed steer over-the-hooks indicator declining just 2pc year-on-year (or 10¢) during the quarter, to average 507¢/kg.

“Diverging cattle and over-the-hooks prices, combined with a rise in feed grain prices during the quarter, will have put pressure on feedlot margins over the period, which is reflected in the lower numbers on feed,” Mr Tolmie said.

ALFA president Tess Herbert said the easing in cattle numbers on feed in the December quarter was expected, given the change in trading conditions for both grain availability and demand for cattle.

“Despite cyclical pressure on feedlot input costs driving a reduction in numbers on feed, we continued to see strong demand for high quality grainfed beef right up to the end of 2017,” Ms Herbert said.

Demand from Japan – Australia’s biggest export destination for grainfed beef – resulted in a 7pc year-on-year increase for the December period, while China volume lifted 44pc from year-ago levels. Exports to Korea reported a slight reduction of 4pc year-on-year albeit compared to a record high quarter the year prior.

MLA’s weekly feeder cattle report for the week ended Friday had most feeders trending down in price. Paddock-0sourced domestic feeder steers 280-350kg were back another 2c/kg to average 293c/kg liveweight, while heifers were back 3c to 278c. Flatback steers suited to 100-day programs (380-500kg) were back 5c to 302c/kg. Equivalent feeder cattle bought via the saleyards system were back by up to 11c/kg liveweight, due to supply pressure and soft demand.