DRY conditions across large parts of eastern Australia have pushed numbers on feed above one million head for only the third time in history, in the March quarter industry survey results released this morning.

Cattle on feed for the January-March quarter reached 1.025 million head, up 52,506 head or five percent from the December quarter.

The figure was 12pc above the five year average for cattle on feed, and comes despite extreme high feedgrain and ration prices. 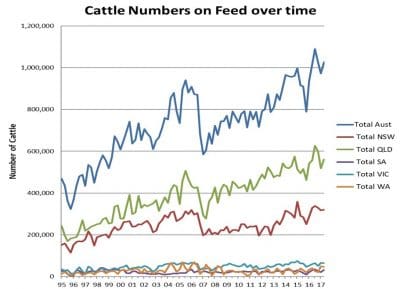 Queensland experienced the greatest rate of change with an additional 42,782 head coming onto feed, pushing numbers to 561,500 head. That’s still well short of the 627,000 head on feed in Queensland in the June quarter last year, when the national COF figure touched 1.089m.

Some Queensland feedyards have reported larger than usual inflows of southern feeder cattle into their pens over the past three months, in response to southern seasonal conditions. There’s also clear evidence of large integrated lotfeeder/processors ‘stockpiling’ cattle on grain, in preparation for an anticipated mid-year shortage of killable grass cattle.

ALFA president Tess Herbert said the results were not surprising given the extended period of particularly dry weather for much of mainland south-eastern Australia over the quarter – the seventh-driest such period on record for that part of the country.

“The feedlot production system has cemented itself as an integral part of the branded beef movement, with a reputation for consistently delivering high quality beef to consumers. Despite the rise of branded beef programs, it’s important to remember that our production system also plays an important role in managing variable seasonal conditions for the beef supply chain.”

“The winners are consumers of Australian beef who will continue to have access to consistent, high quality product despite the ongoing tough seasonal conditions,” Mrs Herbert said.

The lack of moisture across the Eastern states added pressure to feedgrain prices which increased 6pc on already high levels from previous December quarter, following increased competition from graziers, lot feeders and grain traders all trying to secure tonnage.