‘Curve-benders’ and ‘orphans’ show the extremes in cattle weightgain performance 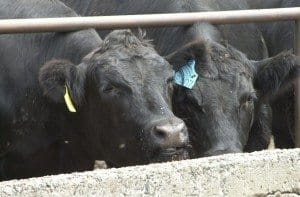 In the first example, explored in detail below, a line of 154 British-based milk-tooth feeder steers fed a high-performance wheat/barley based ration at Lilyvale feedlot near Condamine produced average daily gains of 2.42kg/day (full weight).

It exposes the vast gulf of performance difference being seen presently in cattle being fed for exactly the same grainfed market.

The first group were part of the same calf drop that produced this week’s Brisbane Show 70-day performance class feedlot weightgain winners from Lee and Megan McNicholl from Dulacca.

Those seven competition steers gained at a phenomenal 2.95kg/day, with three individuals in the pen pushing past 3kg/day (see earlier report).

Their 154 cohorts in the recent Lilyvale feedlot intake highlighted above weren’t that far behind.

The pen was a mix of straight Angus, Angus x Shorthorn and some Brahman x Angus and Brahman x Shorthorn crosses. Interestingly, the Indicus cross steers were 10kg heavier at close-out than the straight British lines, averaging 322kg carcase weight, gaining a little better than their straightbred half-brothers.

“There’s just so much unexploited potential to improve average weightgain in feeder cattle – in the way they are bred, handled, fed and managed”

Owner Lee McNicholl, a veterinarian by trade, said he consistently saw similar runs of fed steers from Arklow doing between 2.3kg/day to 2.5kg/day, measured on a full weight into the Lillyvale feedyard.

“There’s just so much unexploited potential to improve average weightgain in feeder cattle – in the way they are bred, handled, fed and managed,” Mr McNicholl said.

“Most people under-estimate how much we unnecessarily stress young cattle in the routine things we do to them,” he said.

Weaners at Arklow are yards weaned and trained to bunk feed, and were well imprinted with human interaction, which stayed with them for life.

“When you breed and feed your own cattle through a custom-feedlot, there’s a strong financial incentive to do everything right – as was seen in this highly profitable result. Conversely, you can do everything right with your feeders and sell them to a feedlot as feeders, you can in fact get very little benefit from higher performance.”

The particular steers highlighted in this case study were not pre-vaccinated on property for BRD, but received Rhinogard and two vaccinations using Bovillis MH at entry. They received two Revalor implants during the feeding period, re-implanted at day 55.

Mr McNicholl said genetics also played a significant part in feedlot gain performance. He aimed to buy Shorthorn and Angus herd bulls in the top 25 percent of the breeds for growth.

“Another factor is that we never box our cattle with strangers at the feedlot. I always make sure I fill the entire feedlot pen with my own cattle, that are already well-socialised with each other in the paddock. Introducing strangers in a feedlot pen brings in another element of stress, which is the root cause of respiratory problems, and poor gain performance,” he said.

“The more I see of the cattle management process from the paddock and through the feedlot cycle, the more I realise we, as an industry, have under-estimated how important socialisation is in cattle performance, and how much we can unnecessarily stress cattle in the way we handle and mix them.”

Another factor was transport distance. The steers in this example travelled just 50km from their home paddock to Lillyvale, typically losing only 2-3pc liveweight in shrink during the transport phase, on a full weight.

“Some cattle out of Roma yards might record 10pc shrink by the time they arrive at the feedlot – and then get mixed with strangers,” Mr McNicholl said.

Lack of stress before and during the lotfeeding phase was reflected in very low pull levels in the pen, with just 11 sick-pen tags issued, accounting for just 34 units of Draxxin.

In the second contrasting example of recent feedlot performance, a large export supply chain briefed Beef Central last week on a particularly large line of Wagyu F1 steers it had fed under a 100-day program and processed recently.

As Beef Central has highlighted earlier, there’s a large surplus of F1 Wagyu feeders in the system at present that will not be required for existing longfed Japanese style feeding programs. This followed a huge surge in F1 breeding programs across eastern Australia during 2017 and 2018, progeny from which is now working its way through the system.

This line of more than 4000 F1 feeders purchased back in March for around 300c/kg liveweight were described to Beef Central as a ‘commercial trial’ to see if such cattle could be financially viable under shortfed programs. The buyer hoped that a proportion of the steers might produce higher marbling score carcases 3-4 and better to somewhat offset slower rates of growth. For this reason they received no growth implant.

Marbling scores were generally disappointing after 100-days, but it is well known that marbling is typically laid down during the back half of a longfed Wagyu program, not the first 100 days.

Due to their slow growth, the steers dressed at a disappointing 270kg, but the owner was not prepared to feed them on to more desirable weights due to cost.

Not surprisingly, the project delivered a considerable loss.

Raising this example is not meant to be any sleight on Wagyu cattle performance, whatsoever, as these cattle were being fed under a program completely unsuited to Wagyu genetics.

However it simply reflects that there is an abundance of Wagyu F1 feeder cattle in the system at the present, which for various reasons are not finding their way into traditional Japanese-style longfeeding 350-400day programs, but which are instead ‘defaulting’ into other shortfed or domestic programs, for which they are much less well suited.

Drought is also pushing more of these ‘orphan’ Wagyu F1s into feeding programs that do not allow them to properly express their genetic potential.