The latest survey results for the June quarter compiled by Australian Lot Feeders Association and Meat & Livestock Australia showed numbers on feed at the end of June at 1.01 million head, down about 77,000 head from March, and 220,000 or 18pc lower than the record-high seen in the December quarter. 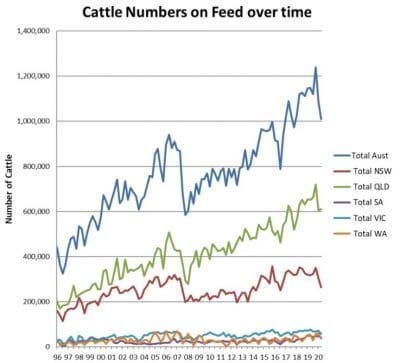 While still above one million head for the tenth consecutive quarter, numbers on feed have not been this low since December 2018, prior to the start of the drought.

Given that some yards were clearly operating ‘over-capacity’ during the depths of the drought last year, actual declines over the past six months may be larger than what was reported, grainfed stakeholders told Beef Central this morning.

Proportionately, it is the smaller ‘opportunity’ scale feedlots, which tend to be more flexible in their operations given lower overheads, which have declined the most. Yards 500-1000 head in size dropped 16pc in numbers in the past three months, while the smallest category for yards less than 500 head dropped by 23pc, as profitability declined.

Going against the broader national industry trend, Queensland saw a moderate 1pc increase in numbers between the March and June quarters, rising to 611,683 head.

Western Australia recorded the largest percentage decrease, falling 22,496, or 37.7pc to 37,096 head, reflecting the normal seasonal nature of lotfeeding in the state.

ALFA president Bryce Camm said improved seasonal conditions and its impact on cattle availability has been a key driver of feedlot production dynamics over the last quarter.

“While old crop prices eased slightly with the prospect of a good winter crop outcome, the combined factors of dearer cattle and relatively high grain price has impacted lot feeders’ decisions,” he said.

This pattern is clearly reflected in Beef Central’s most recent 100-day grainfed trading budget, compiled back on July 22.

“Whilst there has been a level of pressure on the feedlot sector, it’s encouraging for the cattle industry to see a number of areas currently experiencing improved conditions for cattle production and cropping,” Mr Camm said.

Nationally, feedlot utilisation is back 8pc in the June quarter to 70pc, with all states recording declines from the March quarter, except for Queensland which remained relatively stable.

“Despite these challenges, numbers on feed above one million head demonstrates the industry’s resilience and the continued demand for high quality grainfed beef from international and domestic markets.”

Long-term commitment and investor confidence in the feedlot production system continues, with feedlot capacity increasing a further 2.5pc in the June quarter, to a record high 1.433 million head.

MLA’s senior market analyst, Adam Cheetham said while COVID-19 added a level of uncertainty in global markets, there was sustained demand for finished cattle over the April to June period.

Prices averaged 613¢/kg cwt for the quarter, in line with the March quarter and 7pc above year-ago levels, giving some relief to the challenges faced by the lotfeeding industry, he said.

“Despite the uncertainty COVID-19 has had on overseas markets, Australia’s overall grainfed exports remained stable with the previous March quarter, totalling 78,076t shipped weight for the June quarter, back 2pc from year-ago levels,” Mr Cheetham said.