A $30/tonne softening in ration prices, combined with a slight easing the feeder steer values, have delivered a much improved $40/head loss in today’s budget, a $35/head improvement since mid-June and a whopping $172/head better off than a record $212 loss forecast back in early May.

Results are based on our typical flatback 450kg feeder steer, going on feed today and closing-out after 105 days on feed on November 7 (see our standard set of variables at base of page).

The business of feeding and marketing grainfed cattle is complex enough at the best of times, but the recent COVID-19 environment is bringing a suite of new challenges to bear that stakeholders have not previously contemplated. That’s reflected in some substantial changes in variables since our previous report back on 17 June.

For today’s budget, we have allocated a feeder steer purchase price of 370c/kg, easing 5c/kg from 375c last month – that was equal to the highest figure we have ever recorded for feeders in this nine-year series.

Saleyards numbers have started to lighten off since a brief lift in early July due to delayed selling for tax reasons, putting renewed pressure on feeder cattle supply. Better cattle are still making 380-385c this week in grids, with Angus around 420c, but bids appear a little more conservative this week, from where they were a week or so ago.

An important feature in today’s trading budget is that it is the first for the year to ‘cross over’ into some new season crop prices. Last month’s budget was based entirely on old-season barley and wheat, but at least some of today’s cattle, scheduled to exit the feedlot at the end of the first week in November, will have exposure to new season crop.

Based on current indicative prices, rations based on new season barley (current October) could drop another 10 percent, some lotfeeders believe.

While today’s budget’s ration price at $400/t represents a big drop, there is still a very wide spread evident in feedlot offers, with some yards still quoting as much as $450/t. The big discrepancy between barley and wheat prices is part of that, and sorghum prices, now in the mid to low 300s, is also coming back into calculations in Downs feedlot rations.

Today’s finished ration price is the first time the figure has been at, or below $400/t in this series since April 2018, when prices dipped to $390/t.

Total feeding cost in today’s budget is $626/head, back almost $50, compared with our previous budget, and a hefty $110/head less than May. Total production cost (feeder steer cost plus feeding costs) is $2404, back $71 on our June 17 budget, influenced most by the lower ration prices. 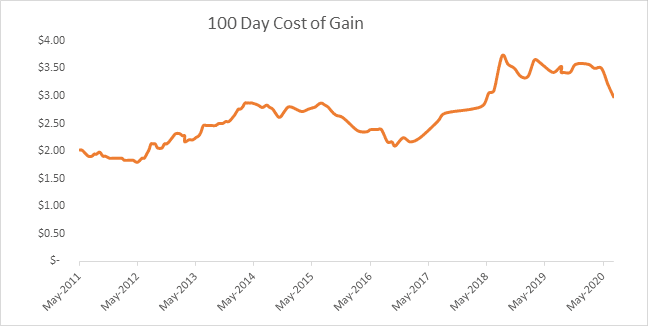 The easing in COG is making lighter cattle a little more attractive again, but unlike the trend back in 2016-17 when light feeders were highly attractive due to low cost of gain (see graph) and ration prices around $280/t, this time lotfeeders are facing extreme competitive pressure from restockers for the same light store cattle. Sub-300kg cattle at Roma sale this week were in the low 400c/kg range – perhaps not as lofty as some of the +450c prices seen earlier – but looking a little more attractive, and some yards are now inducting some lighter cattle around 350kg for 100-day programs as a result, which is helping preserve occupancy levels.

All that leaves today’s breakeven figure on our standard beast at 681c/kg, down from 701c/kg a month ago.

Forward contract prices on 100-day ox offered by processors have softened 10c/kg this past week, for a range of reasons discussed in Tuesday’s weekly kill report. For today’s budget we have quoted 670c/kg for forward contract cattle exiting the feedlot early November.

Given our breakeven figure of 681c/kg calculated above, today’s forward contract bullock slaughter price represents a loss of $40 on our standard steer gaining at 2kg/day, a $35 improvement on last month.  Profit on a higher performance animal gaining at 2.2kg/day, instead of our standard gain of 2kg/day, is almost $35.