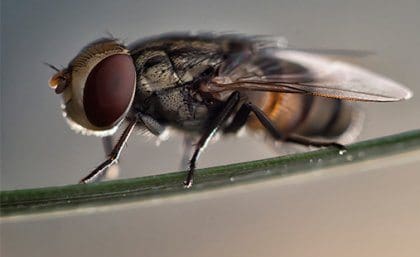 The University of Queensland and Queensland Department of Agriculture researchers have developed a clean and safe insecticide to combat nuisance flies in cattle feedlots, using spores of a naturally occurring fungi.

“The spores of a Queensland strain of the Metarhizium anisoplaie fungus have been developed as an ultra-low volume spray that attaches to the external surface of the fly or is ingested by the flies and kills them,” he said.

“The spray is very safe, has no effects on humans or animals, and is part of an integrated control approach to suppress fly populations.”

It sticks to the surface of flies and also to vegetation around feedlots, and is not sprayed on cattle.”

It is being tested at feedlots in the Dalby area in Western Queensland.

“A lot of work has gone into isolating different strains of the fungus that are effective against flies, then testing different ways of mixing it and applying it in an ultra-low volume formulation.”

He said the spray did not kill flies immediately.

“This is very much about suppression of the population rather than a ‘hit them and die immediately’ approach, as we do not want to knock out the natural predators and parasites of the flies, which would ultimately lead to a resurgence in pest numbers.” The project, funded by Meat and Livestock Australia, and led by Dr James and Dr Diana Leemon from the Queensland Department of Agriculture and Fisheries, aims to develop a commercial product for use in cattle feedlots.

QAAFI is a research Institute at The University of Queensland, jointly funded by UQ and the Queensland Government.  This is a collaborative project that is builds on work carried out by DAF scientists in previous MLA funded projects.