A REVIEW of feedlot induction processes in the Australian lotfeeding industry has revealed opportunities to introduce automation at key points of the process to improve safety, efficiency, and reduce costs. 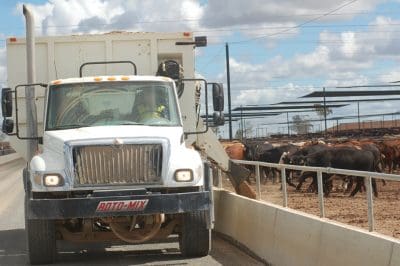 Payback on some applications could be less than three years, researchers found.

The Review of Opportunities for Feedlot Induction Automation project evaluated the potential of cost-effective automation in cattle feedlots and found there is a positive value proposition for lotfeeders in applying more automated technology.

Funded by grainfed levies in consultation with the Australian Lot Feeders Association, the MLA project was led by Dr Cheryl McCarthy from the University of Southern Queensland, along with colleagues Professor Peter Brett and Dr Matthew Tscharke.

It investigated processes at 16 Australian feedlots through telephone surveys, plus on-site measurements and observations at seven yards.

“We found it took an average of four staff to induct 370 cattle a day, over a timeframe of five hours a day, four days a week,” Dr McCarthy said.

“All surveyed feedlots had electronic RFID and weighscales at the induction crush. About 11pc of all instances of induction processes had some automation features.

“The human operators were very fast – each person performed an average of four tasks per animal and it took an average of 23 seconds in total.

The research found that tasks associated with ear-tagging and cattle catching were the most time-consuming tasks for all seven feedlots.

“On average, the equivalent of one labour unit was waiting across the induction team for the time the animal was in the crush, and the cattle catch comprised 24pc of the time to induct one animal,” Dr McCarthy said.

The results suggested that up to two labour units could be reallocated to other parts of the feedlot through automation of induction processes. Across the observed feedlots, 89pc of induction tasks did not have automated features.

Dr McCarthy said the telephone survey of lotfeeders identified three main priority areas for the introduction of automation in the feedlot induction process.

They included automated precision dosage of animal, better immobilisation of cattle for treatment, and further reduced contact between staff and animals.

“We found the greatest advantage in automation technology would need investment in two important infrastructures. One is more animal calming measures with solutions that control animal vision in pens, smooth voluntary motion and avoiding intermittent motion,” she said.

“The other is a computer WI-FI intranet system integrating animal identification, database, interaction with smart tools and pens, automated decisions, real-time progress on tasks and feedback to the operator.

“These measures would empower advanced induction processes that are accurate, safe, efficient and able to adopt the benefit of new technology as it arises in the future.

Financial justification for the addition of automation technology in feedlot induction could be modelled by contrasting the difference between a non-automated system and an automated system utilising smart tools assumed as commercially available products.

“Already, 50pc of tools are approaching a stage of being able to link and integrate with the wider system, sharing and communicating data automatically.

“Taking account of financial savings of reduced labour, more efficient chemical application and reduced injury, and working from quotations and costs of equipment, the model demonstrates that the break-even point occurs well within a period of three years on the additional investment for automation.”