SIGNIFICANT red ink has re-emerged in Beef Central’s regular 100-day grainfed trading budget calculated this morning, which has produced a $32 loss on bought steers entering the feedlot today and closing out after 105 days on October 23. 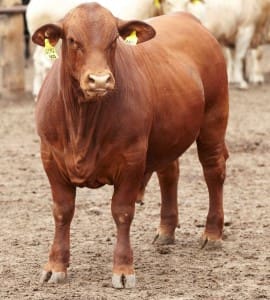 The result, based on our standard set of variables which can be viewed at the base of this page, is driven by sharp but not unexpected rises in feeder cattle price, plus a solid upwards adjustment in rations.

In combination they have overwhelmed the steady advance seen in grainfed cattle forward price.

Our recent sequence of trading budgets since April have sat close to or just above breakeven, but today represents a new trend line.

For today’s budget, we’ve raised the feeder steer purchase price by 10c/kg to 280c/kg liveweight – equal to our highest-ever feeder purchase price – primarily on the back of the increased demand that’s clearly evident through NSW.

It’s also clearly reflected in saleyards results and the Eastern Young Cattle Indicator which closed at 535c/kg – up close to 200c/kg on this time last year. Over the recent record run of EYCI results, while Queensland is beginning to catch up, the real momentum has come out of southern areas.

Today’s steer value at 280c/kg values him (450kg liveweight) at $1260, again equal to our record-high recorded in this report over the past four years.

As can be seen on our combined graph (feeder price and total production cost) published below, this time a year ago the feeder price was 195c/kg, representing an 85c/kg rise since, worth $382. 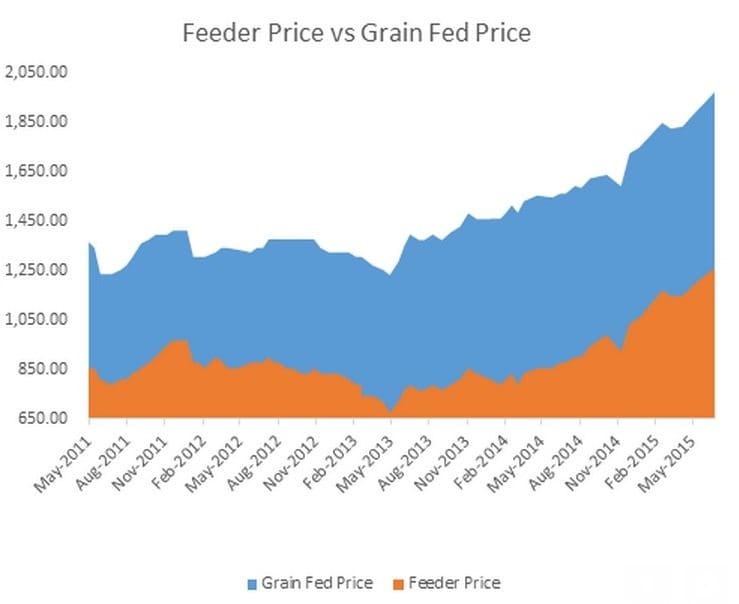 At their lowest-ever point in our breakeven reports (May 2013), feeders were worth just $670, representing a rise of $590 since.

It’s hard to see any easing in feeder price ex darling Downs in coming months, and if anything, are only likely to continue to firm, assisted to some extent by recent currency movement and the strength of export markets, along with the obvious tightening of supply.

Also worth noting is that the historically unusual bias that’s been evident in heavy feeder pricing over lighter feeders/backgrounders over the past 6-12 months is now showing signs of disappearing.

Lighter steers are now very similar in value to heavier feeders, if not a little ahead. Earlier, they were probably 10-15c/kg cheaper, because of limited restocker demand coupled with strong competition for ‘feedlot-ready’ cattle.

For today’s budget, we’ve lifted ration price another $10/t to $385/t – again equal to our all-time record high, last logged in April last year, at the height of the grain price rise due to drought. The seasonal outlook based on El Nino is  a strong contributor to that grain, and hence finished ration price rise.

The fact that Queensland and northern NSW feedlots remain near capacity also helps sustain current pricing, because there is little or no competitive pressure on custom-feedlot operators to lower their margins in order to attract business. Much of the grain currently in use in Queensland and northern NSW feedlots currently also has a lot of freight on it.

At today’s designated ration price used in our breakeven, it represents a total feeding cost of $604, and cost-of-gain, using our chosen variables (2kg/day ADG, for 210kg gain over 105 days) of 287/kg, again equalling our all-time record last seen 15 months ago.

All that delivers a total production cost (steer purchase plus custom feeding price, freight, interest, contingency, levy and induction costs) of a mammoth $1972 – a breathtaking $63 on our last breakeven and easily the largest ever seen (see graph). Back in May last year, that figure was $1232 – a $740 rise in production cost since.

Combining the above inputs, it delivers a breakeven in our latest budget of a 559c/kg, up 18c/kg on a fortnight ago, and again easily a record in our regular report. It’s well over 110c/kg higher than this time last year.

Helping work against those considerable headwinds, we’ve got today’s SEQ kill forward price for our finished 100-day grainfed steer, exiting the feedlot October 23, at 550c/kg, up 10c/kg on a fortnight ago.

Compare that figure with our first report this year in January (480c/kg), and it represents a hefty $250 higher return on our typical 356kg grainfed carcase over the past six months. The current forward price values our 356kg carcase at $1958.

Given today’s breakeven at 559c/kg, and today’s processor forward purchase price of 550c, it means today’s trading budget comes back at a loss of $32 a head, based on our regular variables.

Worth mentioning also, are some of the other forward prices for grainfed heavy steers. Angus premiums are 10-20c above that level, and non-HGP premiums are typically a 30c/kg premium. It means an Angus+ no HGP premium in competitive SEQ grids at present is around 610-620c/kg.

In comparison, cattle forward-bought by processors at the end of March, were on 505c/kg contracts. It means processors buying cattle today in the spot market are probably 10c/kg ($35) worse-off than on equivalent cattle they forward-bought three or four months ago.