NORTHERN Territory Livestock Exporters Association chairman David Warriner told members at last week’s NTLEA AGM in Darwin that producer and exporter unity in the northern cattle industry was proving to be a much-needed source of strength in the face of ongoing market challenges. 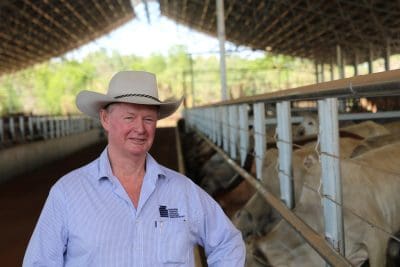 Mr Warriner, who is completing his third two-year term as NTLEA chairman, is a prominent northern beef industry figure who also served as president of the Northern Territory Cattlemen’s Association from 2012-2015 in the aftermath of the suspension of live cattle exports to Indonesia in 2011.

“As a former NTCA president, I am pleased to say the northern cattle industry is drawing strength from the close alignment between the NTLEA and NTCA, as well as associations like the NT Farmers and the NT Buffalo Industry Council. It is important for unity and leadership to continue to characterise the relationships exporters have with producers, because when speaking to government, nothing assists industry quite like a united voice,” he said.

In his Chairman’s report, Mr Warriner thanked former NTLEA CEO Will Evans who resigned in March to head-up the NTCA.

“We acknowledge Will’s efforts during his time with the NTLEA in helping to create positive outcomes for exporters in his policy and advocacy work. Since Tom Dawkins commenced as our CEO in May, that consultative and proactive approach has continued, both within the NT and also nationally,” Mr Warriner said.

“We have a very positive and collaborative relationship with the Northern Territory Government, especially the Department of Industry, Tourism and Trade. In particular I want to recognise our Minister, Nicole Manison, and her Department’s Deputy CEO Luke Bowen, for their leadership and ongoing support for our industry.”

Mr Warriner said the NTLEA had played a central role in navigating COVID-19 supply chain hurdles, stretching back to the start of the pandemic and even in recent days as pre-export cattle transport plans adjusted to lockdown measures and road checks around Darwin and Katherine.

“The NTLEA is recognised as an organisation which undertakes a very unique function in the advocacy space because we represent the whole live export supply chain,” he said.

“A great strength of this organisation is that our membership extends beyond our core group of licenced exporters to include quarantine yard operators, road transport businesses, major pastoral producers, industry vets, fodder providers, stevedores and livestock shipping companies.”

“With that overarching perspective, we’ve done our best to keep the industry moving by helping to facilitate the movement of essential personnel across borders and to bridge the unforeseen gaps so that pandemic rules haven’t created animal welfare risks and or logistics problems.

“The NTLEA has shown it is agile enough to represent all aspects of the northern live export industry and to respond to challenges arising anywhere in the supply chain. COVID has proven our value to our members and to government, and confirmed the ongoing importance of our work in the future.”

Mr Warriner pointed to the coordination of supply chain activity in early July when a snap lockdown coincided with a spike in dry-season cattle deliveries to Darwin Port.

“We worked in step with the NT Government, linking our members from across the supply chain, to oversee the successful, streamlined delivery of more than 15,000 cattle – some 100 road train movements – from various yards and through a number of checkpoints to the port in less than 24 hours. The result was a great credit to all involved.”

Mr Warriner said that five years since he was first elected NTLEA chairman in 2016 and as he embarks upon his final 12 months in the position, it continued to be an enjoyable and rewarding role.

“The NTLEA is a member-based organisation and the most important message from me today is one of sincere thanks to our members. I am extremely grateful to the exporters and other supply chain businesses who continue to support the NTLEA, especially as they endure difficult trading conditions and squeezed profits,” he said.

“The people in our industry are our greatest asset and it has been tough to be isolated from our peers as the pandemic has dragged on, especially as we have grieved the loss of industry friends in Indonesia, the crew of Gulf Livestock 1 and industry veteran Greg ‘Whippy’ Smith.

“The fact many of us today in Darwin are able to come together is something quite special and an opportunity that we certainly don’t take for granted. We will toast those who aren’t with us today and we look forward with even greater anticipation to our national conference, LIVEXchange 2022, in Darwin this time next year.”