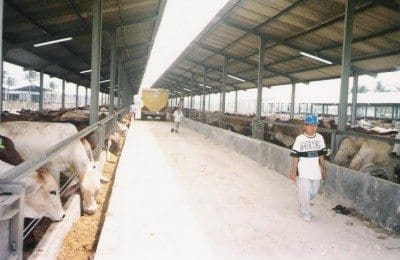 A new feasibility study recommends the development of a supply chain to export feeder cattle from northern Western Australia to Thailand for fattening and processing, to supply beef to both the Thai domestic market and for re-export to other ASEAN markets.

The study, released yesterday, was commissioned by WA’s Department of Agriculture and Food to explore the benefits and risks of a new integrated live export supply chain between northern WA and Thailand.

The study was conducted by the AEC Group and was funded as part of the four-year, $15 million Northern Beef Futures (NBF) project, which is funded by the WA Government’s Royalties for Regions program. The aim of the NBF initiative is to transform Western Australia’s northern beef industry through market diversity and improved business models and integrated supply chains.

Thailand has a population of 60 million people and is the second largest economy in the 600 million strong ASEAN region, behind Indonesia.

The study assessed a specific hypothetical supply chain model involving the export of live feeder and/or slaughter cattle from northern WA to Thailand for finishing and processing. The model offered a number of advantages, the report said, including:

The report suggests the new supply chain should be developed with co-investment between Australian and Thai stakeholders, including Thai processors, WA graziers, and Thai feedlot operators.

The supply chain model assessed in the report involves the construction of a $7 million, 30,000 head feedlot in Thailand, which would import about 6500 cattle per month, and utilise a 120-day feeding period. It would also incorporate the establishment of a $22 million abattoir to handle throughput of 96,000 cattle per annum, based on the scale required to service both Thai domestic and third-country re-export markets.

“After 10 years of operations, the project is assessed as financially viable, generating a positive Net Present Value (NPV) of $20.2 million (฿505.2 million) applying a 12% real discount rate,” the report states.

“Based on current Thai wet market and supermarket prices (AUD $8-$11/kg retail) the new supply chain may need to attract a price premium in order to be viable in the domestic market.

“Such a premium is possible given the potential quality and consistency of Australian feeder cattle fattened in Thailand and processed in a modern abattoir · Production is assessed to be competitive with Thailand’s fresh and chilled beef imports, which averaged approximately AUD $14-$15/kg over 2014

“Other potential market opportunities include the Middle East (Saudi Arabia, Israel, Egypt) and expanding inter-ASEAN trade as the regional market continues to develop.” The report notes that Thailand is seeking to have selected provinces declared FMD-free (with vaccination) with the OIE.

Thailand opened as a market for Australian feeder and slaughter cattle after both countries agreed to the required animal health protocol in late 2014.

That fell short of initial projections that Thailand would take 30,000 in its first year, with rising Australian cattle prices and the weakening of the Baht against the Australian dollar eroding margins for Thai importers seeking to buy Australian cattle in 2015.

The report says the northern WA supply region has a herd of just over 1 million head Bos Indicus cattle with an annual turnoff 230,000 to 320,000 head.

The region is already strongly geared towards live export to Indonesia, Vietnam, Israel and Malaysia.

“The regional preference for live export is due to the suitability for production of feeder cattle preferred by Asian markets and significant distance to domestic processing, which is concentrated in the south west of WA,” the report notes.

While the report focused on one particular supply chain model, its authors noted that a broad range of potential operating models are available to proponents of varying scales and risk appetites.

“Thailand possesses significant potential as a destination for developing a new and innovative beef supply chain.”

A similar re-export concept was floated in Indonesia in the 1990s by AustAsia, under the brand name “Aus-Indo Beef”, using Australian cattle fed and slaughtered under USDA-certified Halal conditions in Indonesia. The plan  drew a torrent of criticism from the Australian beef industry, concerned that Australia’s hard-won reputation for health & hygiene and quality standards might be compromised.