An aerial view of the Port of Townsville.

2018 has been a busy live export year in Townsville, with the port sending a first consignment of slaughter cattle to China in January, and exporting almost 50,000 cattle during the month of October alone.

Improving demand in Vietnam has been a driver of the increased activity, with about 40pc of total exports from Townsville comprising slaughter weight cattle for that market.

However, feeder cattle to Indonesia still account for the biggest share of export volumes from the port, representing 60pc of total exports so far in 2018.

Department of Agriculture and Water Resources (DAWR) statistics show 368,699 cattle have been exported from Darwin during the same period of 2018, also a three-year high for that port. 80pc of exports from Darwin this year have comprised feeder cattle to Indonesia, with slaughter cattle to Vietnam accounting for 12pc. 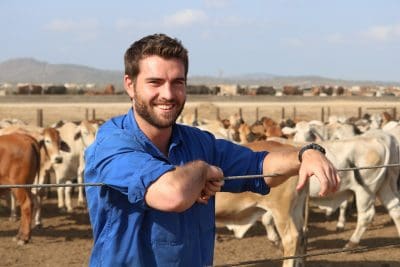 Frontier International export officer Cameron Jenkins said cattle for Townsville shipments are generally sourced from a large catchment area extending from Emerald and Rockhampton in the south to Richmond and Winton in the west and up to Mareeba and the Atherton Tablelands to the north.

Prices in Townsville are typically 20-30c/kg less than Darwin, reflecting the cost of trucking cattle north to Darwin and the additional costs in shipping cattle from Townsville.

“It is an additional two days sailing to most South-East Asian destinations, which not only increases the freight rate, but also various other costs such as fodder, and payment for the stockperson and now the Independent Observer,” Mr Jenkins said.

“The extra two days also has the potential to impact stocking densities onboard.”

Mr Jenkins said the Port of Townsville can play an important role in assuring supply for the trade particularly during the wet season when sourcing cattle from Darwin can be difficult.

“Once supplies of cattle from the floodplains surrounding Darwin have been exhausted and the wet season sets in, it can be difficult to source the necessary volumes to put shipments together.

“While there are some similar wet weather challenges in Townsville, there are different supply options which mean we can fill any void caused by road closures or other transport issues.

“Townsville has the added benefit of having a number of feedlots in the region which also act as another pool to draw cattle from.”

As the above figures highlight Townsville has become a key supply port for the market of Vietnam, while exports from Darwin are dominated by orders for Indonesia.

“Queensland is a major source for the slaughter-ready cattle preferred by Vietnamese importers, while the Northern Territory is able to consistently turn-off the large lines of feeder cattle in high volumes for Indonesia,” Mr Jenkins said.

“There will certainly remain a place for Indonesian shipments out of Townsville, as an excellent de-stocking option for Queensland producers and a mainstay for those in more marginal areas.

“Likewise, Darwin will continue to take shipments to Vietnam, especially heavy cattle drawn from north-west Queensland and central Australia, as well as the larger numbers of bulls available in the NT which are suitable for Vietnam.” 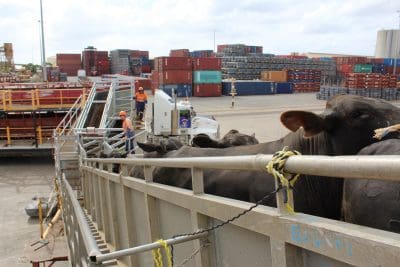 Brangus cattle loading at Townsville for China in January 2018.

“The cattle facilities in and around Darwin are tailored solely for live export, whereas we find that most of infrastructure used for Townsville shipments have been adapted from other supply chain uses.

“These facilities are functional, but as the industry continues to evolve and pursue the benefits of modern yard design and new handling technology, more tailored infrastructure will be necessary.

Exporters, transporters, the Port of Townsville and the stevedores are all working well together to improve the systems in place at the port as throughput increases, to ensure we’ve got the best equipment in use at the port and the best outcomes for the cattle we’re loading.”

Trade contacts have told Beef Central this week that live export prices are currently sitting at $3.25 for feeder cattle in Darwin, and around $3/kg in Townsville.