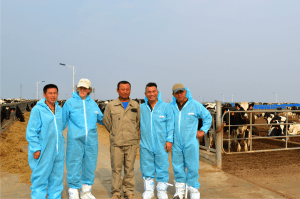 Temple Grandin with Japfa representatives at Japfa’s Dairy Farm No.3 near Dongying City in China.

Ms Grandin was in China to conduct animal welfare training courses across several cities for more than 100 suppliers of poultry, pork and beef to McDonalds, a visit that had been three years in the making.

She then travelled to Japfa’s dairy farms and feedlot near Dongying City in Shandong Province to inspect the company’s facilities and operating procedures and to work with livestock handlers. 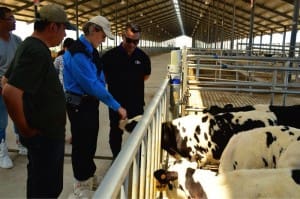 Her inspection followed similar visits to the feedlot by her colleague Mark Deesing, a custom design consultant for Grandin Livestock Handling Systems, during the feedlot’s development stage in the past 12 months.

Construction on a set of Temple Grandin designed processing yards, incorporating her famous S-shape design, is due to commence at the feedlot under Mr Deesing’s supervision in August.

Japfa Beef’s Country Manager Guntur Pribadi accompanied Ms Grandin throughout her recent inspection and said the benefits of Mr Deesing’s earlier training and certification work at the facility were evident.

He said Ms Grandin noted in particular that “bull calves were friendly and willing to approach people, which showed that the people are doing an excellent job handling the animals.” 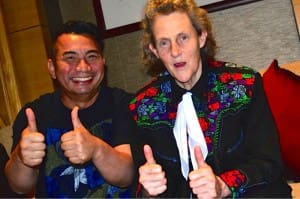 Ms Grandin also described Japfa’s Dairy Farm 3 at Dongying, where she was accompanied by farm manager Wenzai Wu, as “a first rate and world class dairy farm”, noting that from an animal welfare standpoint it was excellent. “I really liked the wide and well bedded stalls that provide a big space for each cow to lie down,” she said.

Ms Grandin advised the managers to conduct continuous measurement of critical control points to maintain the high standards as the facilities continue to grow.

Mr Pribadi said Ms Grandin distributed her animal welfare book translated in Chinese to staff, and left with the words “Animal welfare means give the cattle a good life and a painless death”.

Is Australia missing the boat in China?

When asked about the prospects for Australian cattle to be fed in China, in line with expectations that protocol agreements to open the trade may soon be reached, Mr Pribadi made an interesting observation from his recent visit to the World Meat Congress in Beijing.

He said Australia could be “missing the boat” on the China opportunity, given the overwhelming presence of South American beef producers at the event, particularly from Uruguay, Argentina and Brazil.

Representatives from the US and Canadian beef industry were also at the event in full force he said, with a smaller contingent from India, all lobbying to gain access to the six million tonne Chinese beef market per annum.

For its part, Japfa sees Holstein Beef from its feedlot playing an important role in meeting some of the vast demand for both premium and manufacturing beef in the Chinese market.