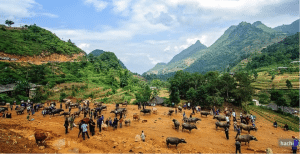 The Can Cau weekly cattle and buffalo market in the Lao Cai province on the Vietnamese/China border to the North West of Hanoi. Picture: Thanh Nien News.

Live export leaders say solid progress is being made towards improving animal welfare standards in Vietnam, despite claims of a stoush brewing between rival exporters over spying allegations.

Livestock exporters have been stepping up efforts to improve animal welfare standards in Vietnam since an emergency meeting was called in March to address problems involving Australian cattle being moved out of approved supply chains.

All Australian exporters servicing the market have since agreed to implement six new standards in Vietnam to prevent further supply chain leakages in future.

The six new standards (detailed at the bottom of this article) largely mirror the Standard Operating Procedures developed by exporter Wellard Rural Exports for its operations in South East Asia. They require the use of 24/7 CCTV cameras to monitor supply chains and random physical inspections of customers’ cattle handling facilities (as detailed in this earlier article).

The future of the trade to the rapidly growing Vietnamese market hinges largely on whether all exporters, who are also fierce commercial rivals, can work together to ensure high welfare standards are upheld in every supply chain.

A decision by any exporter to supply cattle to an importer who they know is not on board with the strict requirements of ESCAS could put the whole trade – one that is relied upon not just by exporters but by thousands of cattle producers across northern Australia – in jeopardy.

The high stakes involved mean that some exporters are not only watching their own supply chains but those of their competitors as well.

When one exporter identifies an ESCAS compliance issue involving another exporter and informs them of the problem, how that move is interpreted can be a sensitive issue. Is the act a legitimate one aimed at protecting the broader industry, or an attempt by a commercial player to undermine a rival?

A stoush that has arisen between two exporters has highlighted how the uneasy truce between commercial rivals over welfare issues can be put to the test.

However, in his statement to police, the Vietnamese national said he was paid 10 million Viet Dong (A$586) by a Vietnamese employee of Wellard Rural Exports to take two Australian men into the feedlot “to take picture and recording for the purpose to send these to Australian government”.

Beef Central understands that in recent weeks SEALS has raised this specific issue with other exporters at a meeting of the Australian Livestock Exporters’ Council, expressing concern that Wellard Rural Exports has hired investigators to spy on it and to make reports to the Federal Government.

Beef Central asked SEALS about the issue last Wednesday, but a spokesman said the company would not be making comment.

“We won’t be providing any comment about those accusations,” company spokesman Dean Ryan said.

“I don’t think it is for the good of the industry.”

However Wellard Rural Exports was prepared to comment when approached by Beef Central, and also provided a written statement from chief operating officer Fred Troncone.

A spokesperson said the company was concerned that accusations being leveled against Wellard suggesting that it hired investigators to spy on SEALS were incorrect, and that behind-the-scenes industry debate had been progressing without the right information.

The spokesperson said the issue was detracting from the bigger picture priority facing all Australian exporters to improve welfare standards in Vietnam.

In relation to the specific events surrounding the arrest at the feedlot near Hanoi on April 7, he said Wellard Rural Exports did not employ the two Australians, and “categorically denied” that Wellard had ever made reports about another exporter back to the Australian Government.

“Wellard knows the employee but it has not employed the two Australian men and has never initiated a report for an ESCAS breach against another exporter to the Australian Department of Agriculture,” the spokesperson said.

In a statement to Beef Central (printed below in full), Wellard Rural Exports chief operating officer Fred Troncone said the company employs its own animal welfare officers to assess ESCAS compliance levels in its existing supply chains in markets such as Vietnam, and also in facilities used by other exporters that it is contemplating adding to its own supply chain.

However, it did not take it upon itself to inform the Federal Government, he said.

“The individual exporter, not Wellard, decides whether to self-report to the Federal Department of Agriculture,” Mr Troncone said.

Similarly, Mr Troncone said, there had been occasions when other exporters’ staff had informed Wellard of supply chain breaches involving its own livestock, and Wellard had been able to immediately rectify those breaches and report the issue to the Department of Agriculture.

Australian Livestock Exporter’s Council chief executive officer Alison Penfold said she was not prepared to comment on any matters raised internally at ALEC meetings, but denied there was infighting between exporters.

Rather, she said, exporters were cooperating to implement the additional standards agreed to last month, which included placing CCTVs in all abattoirs.

She said the only point of debate surrounded the speed of implementation of the new standards in some supply chains. Some exporters had expressed views that other supply chains should be further progressed, she said, but that did not amount to “infighting”.

“All of the exporters are rallying around implementing the standards,” she said.

Vietnam was a market that was suffering from growing pains, she said, and the industry had not shied away from talking about the risks involved if animals were allowed to be moved outside approved supply chains.

The six new standards were targeted largely at ensuring importers knew their responsibilities.

“LiveCorp is developing a program to assist the funding of that, so there is a bunch of things going on and some people appreciate that process more than others.”

This month the live export industry agreed on a six point plan to improve ESCAS-compliance and animal welfare in Vietnam. This six point plan was derived from the minimum standards Wellard had implemented at all facilities within its Vietnamese supply chain.

Some of our customers also directly employ their own animal welfare observers to perform a similar function.

This is a crucial role to assess the level of ESCAS compliance at facilities in our existing supply chain and also facilities we are contemplating adding to our supply chain. Any issues that are discovered are dealt with immediately.

When our animal welfare observers note potential issues with facilities or animals that we believe belong to another exporters supply chain we can’t and won’t turn a blind eye to it. Instead we immediately inform those exporters, not the Federal Government, because it’s the right thing to do by the sheep or cattle. The individual exporter, not Wellard, decides whether to self-report to the Federal Department of Agriculture.

Similarly, there have been occasions when other exporters’ staff have informed Wellard of supply chain breaches and we have been able to immediately rectify those breaches and report the issue to the Department of Agriculture. This is good animal welfare practice.