Slaughter steer prices for March remain generally steady with the indicator rate still at Rp48,000 per kg live weight which converts to AUD$4.32 as noted above using the current exchange rate.

The irony of this figure is that it is almost exactly the price of feeder steers in Darwin. As a general rule of thumb, the cost to deliver an Australian feeder steer in Darwin to the feedlot in Indonesia is about AUD$1 per kg. This means the Aussie feeder today is landing in an Indonesian port for about AUD$5.30 per kg then being fattened and sold for $4.30! This is the sad but simple dilemma for the Indonesian feedlotter who has extremely limited control over their local selling price of cattle and none at all over the incoming price from Australia. Value adding during the feeding period can make up some of this lost ground but it is hard to imagine any importer being efficient enough to end up with a profit when the slaughter animals are finally sold at today’s prices.

Greg “Whippy” Smith was tragically killed while discharging cattle from a ship in the port of Belawan, Sumatera, Indonesia. Go to this link for more information.

The primary change in this price equation is the meteoric rise of Australian cattle prices as a result of a collapse in national numbers during a prolonged drought followed by an excellent grass growing season. Australian farmers need cattle to eat their plentiful grass and they are pushing up the local price aggressively despite the fact that the demand for slaughter cattle from abattoirs supplying export and domestic customers is nowhere near as strong. The result is that abattoirs are currently operating at a loss as they are not able to simply shut down until a more favourable price structure returns. This is exactly the same position as the Indonesian lot feeder who cannot easily shut down but must do their best to operate while minimising losses until a profitable price returns. My advice is that Indonesian feedlots are currently at about 30 percent capacity with this number likely to fall even further as the upcoming Ramadan sales empty them out while imports continue at lower than normal levels. Unfortunately export statistics are slow to be published but the port of Darwin exports to Indonesia in March were only 5848 although I understand that a larger number were exported from Townsville and Western Australian ports. The total figure is still likely to be much less than the recent monthly average of about 40,000 head. See graph below showing the total feeder cattle exported from Australia to all destinations falling fast. The majority of these feeders are exported to Indonesia. March might easily be below 20,000 head. 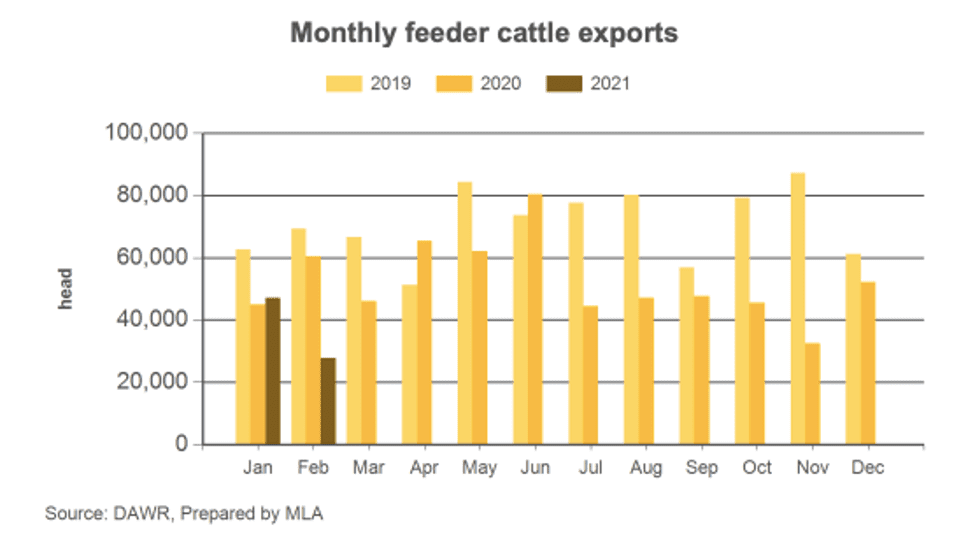 While this is a grim situation for our Indonesian partners it is just part of a natural cycle of fluctuating commodity prices which will correct itself in due course, probably beginning mid 2021 when seasonal conditions will favour larger sales of feeders resulting in easing prices.  The price graph above shows that it was only last April 2020 that Australian feeder prices dropped to as low as $2.60 so the pricing structure is clearly not always in Australias favour and the cycle does move relatively quickly in terms of the international commodity trade.

It’s also worth pointing out that the overall balance of trade between Australia and Indonesia is in Indonesia’s favour with $8.3 billion in exports sent from Australia while Indonesia sold $9.4 billion of products to Australia (2019).

During March the Assistant Deputy Minister for Livestock and Fishery, Coordinating Ministry for Economic Affairs, Pujo Setio, explained that “the topside beef price in Indonesia was lower than in South Korea, Japan, China, Vietnam and Thailand”. If you look at my price table attached at the bottom of this report you will find that my pricing generally agrees with his opinion. As a usual resident of Indonesia for the last 10 years I can confirm through personal experience that the price of food in Indonesia is generally as low or lower than anywhere else in S E Asia.

The Indonesian government continues to search for cheaper alternatives to Aussie live cattle and beef but the options are extremely limited. The possible Mexican live cattle shipping solution has proven to be much more expensive than first expected. Frozen buffalo beef from India is cheap but once again, it takes a long lead time and quite a bit of organisation to ensure adequate supplies are available when needed. Even frozen beef from Brazil is in reduced supply and at relatively high prices with Brazilian processors lobbying their government to allow live cattle imports from Paraguay to boost numbers of stock available for slaughter! New African Swine Fever (AFS) cases have been reported in back yard pigs throughout Java and Sumatera during February. See map below.

Darwin feeder steer prices remain stubbornly high with AUD$4.30 still the quote at the end of March although signs of weakening were beginning to be seen. Townsville prices also remained high towards the end of March with $4 per kg possible for slaughter cattle.

Despite the general heavy rains, there are still a number of areas in Queensland that have not had adequate seasonal rainfall but these areas now represent a relatively small proportion of the state so they are no longer having an impact on prices. Virtually all areas of the Northern Territory have now had satisfactory wet season rains.

Slaughter rates remained stable again during March with the indicator rate for steers still at Dong82,000 per kg live weight. In the case of Indonesian importers, they have the opportunity to reduce the ultimate cost of their sale animal by adding significant value to the beast through the low cost of weight gained during a highly efficient feed lotting process. Vietnamese importers however, in about 80% of the cases, are simply traders, buying and then selling fat cattle. I am guessing that the cost to deliver an animal from northern Australia to Vietnam is roughly similar to the costs for Indonesian deliveries. If this is the case then we need to add about AUD$1 per kg live weight to the landed value of a slaughter steer delivered from Townsville. At the end of March this was AUD$4 plus $1 = ~ $5 per kg CIF. This fat animal is then traded a week or two after arrival for about AUD$4.63. Whatever the costs of delivery are, it is certain that the selling price in Vietnam is way below the total delivered cost at today’s Aussie prices. Once again, just like the Indonesian lot feeders and the Australian meat processors, they must continue trading at a loss and hope that things turn around soon. Unfortunately, given the structure of the businesses involved, the costs of closing the door are even higher than carrying on.

Vietnamese consumers already pay close to the highest fresh beef prices in Asia with only Chinese rates beating them and then only by a small margin so there is no real scope for any significant increase in retail pricing.

Supermarket rates for knuckle have reduced again back to their previous levels in the Dong280k range.

Although Vietnam is well known for its excellent performance in terms of controlling Covid 19, they are having a lot less success with animal diseases. ASF is still a serious problem with a large number of ongoing infection sites. The outbreak of Lumpy Skin disease (LSD) also continues to spread with large numbers of both cattle and buffalo affected and high death rates recorded in some areas. Fortunately, there is a vaccine available which has now begun to be administered. Consumers have been quite concerned about the lumpy skin disease with reports of reduced beef demand due to fears of transmission to humans. Fortunately, LSD is a viral disease of cattle and buffalo transmitted by insects and is not transmissible to humans. Official OIE ASF map. 18th February is the latest I have been able to source.

Slaughter cattle prices have eased lower in both reporting areas with rates down to Y35.2 in Beijing and Y34.8 in Shanghai. This weakening in rates has flowed on to the retail sector where prices have eased off substantially in both the wet market and supermarkets. Retail pork prices have also fallen sharply despite ongoing ASF outbreaks across China. See the OIE map above showing ongoing problems in backyard as well as larger production farms and even outbreaks in wild pigs.

My advice is that this reduction in prices during March is not likely to be long lived as the traditionally high beef consumption period of winter is fast approaching.

Rates unchanged once again during March which included the Christian festival of Lent where some people reduce their consumption of meat and undertake some periods of fasting. My agent reports a general improvement in the economic outlook although Covid 19 is still a major problem especially in Luzon.

As shown in the OIE map above, ASF is still a serious problem for pig production with the majority of new outbreaks in Luzon.

Slaughter cattle prices have eased very slightly with the significant drop in AUD price above mainly due to the exchange rate. Feeder prices remain extremely high and this is probably due to the very tight closure of the Myanmar/Thai border which is traditionally one of the main sources of feeder stock. My sources also advise that they believe that there has very recently been a report of the first outbreak of AFS in Thailand although this has not yet been officially notified through the OIE reporting system.

Question  How do you feed 600 cattle producers and friends magnificent steaks with 2 big barbeques in a machinery shed in a quarry south of Alice Springs?

Not a problem, just call MLA Corporate chef Sam Burke and give him a support team from the Lasseters Casino and it’s done to perfection. Could not fault this extraordinary performance executed with military precision. It would also help if you use Australian Agricultural Company’s exceptional wagyu beef. A choice of medium rare tenderloin or scotch fillet delivered to 600 guests under a perfect desert sky.