For the Bahasa Indonesia language version of this report click here No change in slaughter cattle prices during August. Some feedlotters are able to achieve prices as high as Rp43,000 per kg live weight for the very best, high yielding steers but generally prices remain static as per the policy of the government so I will still keep the indicator rate at Rp40,000 for August.

The Indonesian/Australian live feeder trade has reached an unprecedented crossroads.

The government has successfully held the price down at these low levels through the peak demand religious festival period demonstrating that importers do not have the power to defy government demands for low and stable selling prices regardless of fluctuating costs of imported livestock.

At the same time, prices of cattle have remained unusually firm in northern Australia against the historical trend of a significant dip in prices during the mid year, dry season muster.

The 5% rise in the AUD has raised the delivered costs to importers even further. Having spoken to a number of importers over the last week or so, I can confirm that for the first time in my experience it is perfectly clear that they are unable to follow the buying prices upwards because they know only too well that they will not be able to recover this extra cost by increasing their farm gate rates when these imports are fattened and sold. They are resigned to a medium term future where selling prices can’t be increased. With operating margins on the knife-edge of break-even there is simply no room for more expensive livestock.

During a recent trip to Australia I was able to speak with a number of well informed cattle industry people who explained that even though overall demand has reduced, so have the numbers available across northern Australia so there is effectively no pressure for producers to reduce their prices as internal demand elsewhere in Australia remains adequate to allow sellers to find a home for feeder cattle at the current strong rates.

So, for the first time since the beginning of the trade, producers don’t have to drop their prices in the face of reduced Asian demand at the same time that importers simply can’t pay any more because they know very well they will make a loss if they do. Stalemate.

Given the massive reduction in the Australian herd and the firm stance of the Indonesian government, there would seem to be little scope for a change in the current status of supply and demand. It looks like, for the short term at least, the only hope for the trade is for a reduction in the Aussie dollar exchange rate but even the currency experts are reluctant to make predictions of future trends for the AUD at the moment.

Korban (Qurban) is the religious festival where Muslims donate livestock (male cattle, buffalo, sheep, goats and camels) to Mosques and religious organisations that arrange for the animals to be slaughtered and the meat donated to the poor. As the wealth of Indonesia increases so does the demand for suitable livestock with prices firm again this year at about Rp55,000 per kg for live bulls between 300 and 350 kg. Prices rise as the size of the animal decreases with 150 kg bulls selling for as high at Rp100,000 per kg or AUD$10 per kg. Sheep and goats attract prices of up to Rp85,000 to Rp90,000 per kg live weight.

In the medium sized shopping centre next to my Jakarta office there were 4 religious organisation stalls offering a service to make all the arrangements including the ability to donate meat to the poor in foreign countries. Annual Korban bull slaughter estimates start at the official figures of 250,000 head and head all the way to around half a million head, all killed on one day about 10 weeks after the main festival period of Ramadan and Lebaran. With probably more than a million male cattle killed for Ramadan, Lebaran and Korban the pressure is on the slaughter of breeding females for the rest of the year. Australian imported stock cannot participate in this festival as ESCAS prevents them from being slaughtered as the Mosque. Photo from Frangki Coloay in Balikpapan: Guess 300 kg live weight so about Rp55,000 / kg. These bulls were probably imported from Sulawesi or the Eastern Islands (NTB). One of 4 Korban/Qurban stalls in this small shopping mall in BSD, west Jakarta.

The island of Bali is a major source of Bali bulls (Bos javanicus) for Korban with sale numbers rising dramatically in the lead up to the festival. The photos below are from the Bringkit market in Tabanan which is Bali’s largest livestock market, located about 60km to the north west of Denpasar. The bulls sold here are trucked to Surabaya where traders will distribute them as far as Jakarta in West Java and the larger cities of southern Kalimantan. David Heath tells me that for most of the year the average numbers presented for the Wednesday and Sunday sales is about 2-300. During the month or so before Korban the numbers swell to more than 2,000 head on each sale day. Bull prices rise to about Rp39,000 per kg live weight during the pre-Korban period which puts their delivered price in Surabaya at around Rp50,000+ after costs and weight loss. Bringkit market Bali bulls waiting for the bidding to start. Bali bulls about to be loaded onto trucks to head for the road and ferry ride to Surabaya. Heifers are in high demand once the bull sellers have their cash in hand. 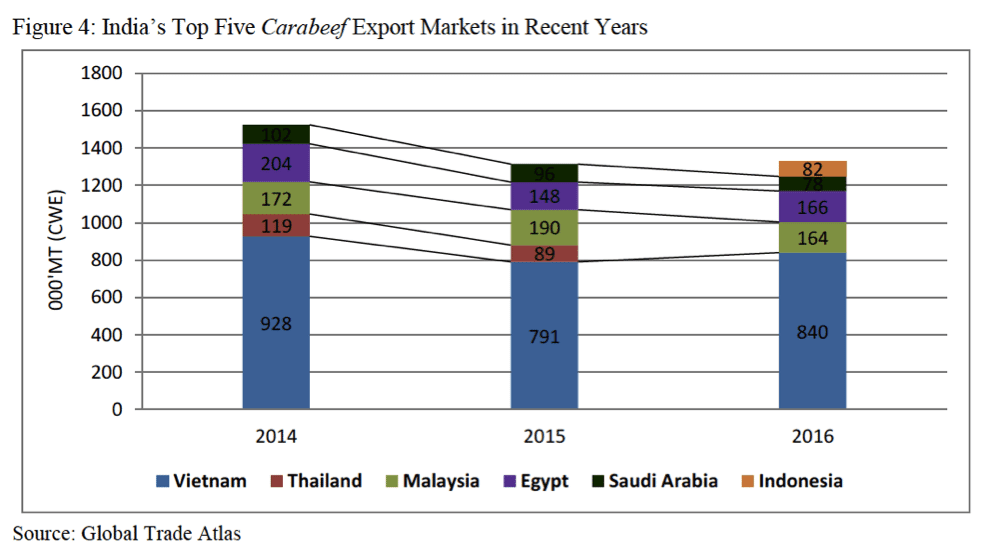 The graphic above is from the USDA Foreign Agricultural Service GAIN (Global Agricultural Information Network) report of the 9th of January 2017. The interesting figure here is the volume recorded as exported from India to Indonesia shown as 82,000 metric tons which, from the figures I have seen, is significantly higher than the official volumes imported through BULOG, the only legal Indonesian importer.

Prices are even weaker this month with the second half of August and early September being “Ghost Month” or the “Hungry Ghost Festival” which is a Chinese and Vietnamese festival which is held to appease the spirits of deceased relatives who wander freely on earth during the 7th lunar month. Beef and other meat consumption is reduced during this festival period.

The best heavy bulls in the north can only achieve Dong74,000 while the best price for highest yielding steers in the south is Dong 68,000. Given these weaker rates, I have reduced the indicator price to Dong67,000 for August slaughter steers.

See below two YouTube presentations that show the aggressive marketing used by Vietnamese beef supply businesses to promote their product. Digital and all other forms of beef marketing are being employed to encourage increased demand for beef, a large proportion of which is imported either live or in the box from Australia.

Bo Khoe is one of the biggest importers of Australian cattle.

Mexican slaughter and feeder Bos Indicus type bulls are both costing around USD$3.00 per kg delivered to west coast ports, including protocol costs but excluding sea freight. USD$3.00 is about the delivered CIF price importers need to pay so the Mexican option remains firmly off the agenda.

Some weakening in demand for slaughter steers as China and Vietnam maintain official import bans due to Beta-Agonist restrictions and outbreaks of Foot and Mouth Disease.

Nothing to report once again in Malaysia except that live male cattle suitable for Korban were selling for RM15 to 16 per kg live (peninsular Malaysia) which translates to about AUD$4.57 per kg at the current RM exchange rate. Imported buffalo beef prices remain stable. With a large ethnic Chinese population in Malaysia, the celebration of the “Hungry Ghost Festival” will have dampened demand for beef and other meat products from this buying group.

Happy days continue for the Philippines economy with relatively stable prices and good supplies of all essential commodities. My agent’s comments are “ Name it and we have it in sufficient supply and for an affordable price”. No movement in live cattle prices although there has been minor increases in beef prices at the supermarkets.

China has gone against the trend this month with a firming of the RMB exchange rate against the AUD which means it has appreciated even more than the Aussie dollar against the USD. Beijing and Shanghai have both reported slaughter cattle prices rises for the 3rd month in a row to Y24 per kg live weight. The advice provided by my sources indicates that there has been useful (late) summer rain in Inner Mongolia which has reduced supplies of slaughter stock presented to the market. Farmers are taking this short opportunity to hold and fatten their cattle so they can be sold at better weights before winter sets in around late October/November. If the rains have been extensive enough to break the long running drought then the excessive supply of drought distressed cattle may begin to dry up by the end of this year with potential to cause a significant shift the national supply and demand equation. Watch this space.

The XinhuaNet digital news reported that several people were killed and a great deal of property damage was suffered when a tornado and severe thunderstorms hit the north-eastern part of the autonomous region of Inner Mongolia on the 11th August 2017. The capital city of Hohot was severely affected. XinhuaNet photo of the flooding in Hohot, the capital city of Inner Mongolia. Chris King was recently in Bangladesh and sent me these photos of aged, draft bullocks and bulls being fattened for slaughter. These big fellows look like they could pull a Toyota out of a bog all on their own.