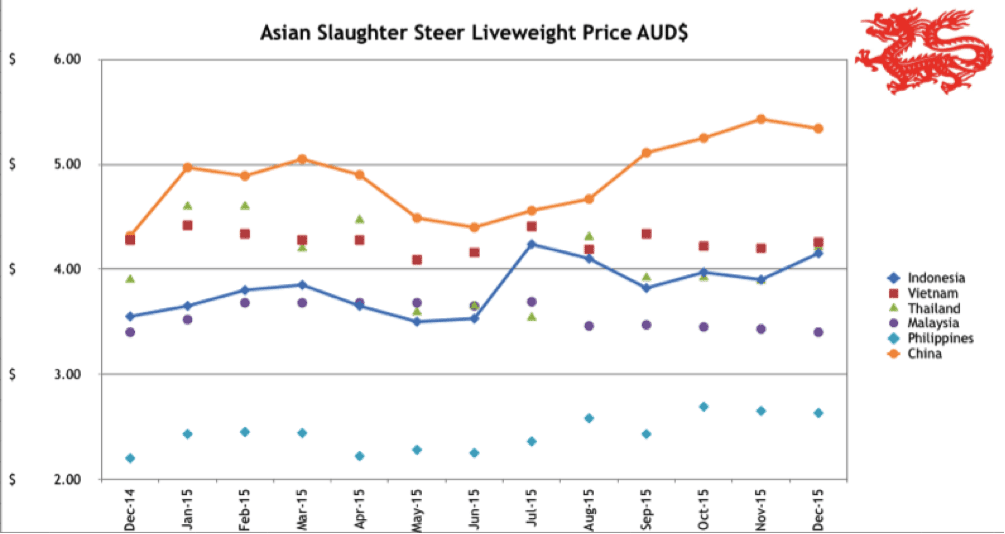 Finally some better news for importers with 2016 permits released “on time” and some significant upward movements in domestic slaughter cattle prices.

An annual permit allocation of 600,000 is probably close to the right number for the market given the many impacting factors but most of all a restricted supply from northern Australia. Breaking the year into 3 permit periods also makes more sense providing importers with additional flexibility to adjust their feeder flows to match their fluctuating fat cattle demand forecasts.

Domestic slaughter cattle prices have been rising for about the last 2-3 weeks primarily driven by restrictions in supply as the low numbers imported in Q3 finally make an impact on the volumes of fat cattle available from the feedlots. Slaughter cattle prices have jumped from about Rp39,000 in November to around Rp43,000 at the end of December/beginning of January. Similar price rises will need to be sustained over the coming months to protect importers from severe losses once the recent expensive imports work their way through to the discharge pens.

Last month I paid AUD$72.50 per kg for a 250 gram steak in Jakarta. I have just spent a very pleasant Christmas in Melbourne and had a good look at local beef and lamb prices. $36 per kg at Coles supermarket may have seemed expensive to me in the past but looked like an absolute bargain after Jakarta rates. Lucky Australians pay some of the lowest prices in the world for good quality beef.

Prices are steady with the base rate in HCM rising a touch to 69,000 Dong per kg live weight with less downward pressure from discounting. The bulge of over-supply is slowly working its way through the supply chain and should be cleared in another few months. The Hanoi price remains at Dong71,000. Government officials continue to investigate their options for regenerating the Thai domestic herd with fact finding visits to Australia and good attendance at a beef cattle seminar in Bangkok delivered by the Western Australian Department of Agriculture.

Nothing significant to report in Malaysia except for a continuing weakness of their currency and a rise in chicken prices. Retail frozen Indian buffalo beef continues to sell for about 50% of the price of other beef products.

More of the same in the Philippines with Christmas celebrations keeping prices of cattle and beef firm while chicken prices peaked on about the 23rd when chicken supplies actually ran out in many major centres. High quality imported beef continues to sell for anything up to 10 times the price of local product.

Live cattle prices remain firm with the Beijing rate the same as November at Y25 per kg while the Shanghai rate has edged up to Y18. While these firm prices reflect the general shortage of beef and cattle across China, winter is the season that traditionally experiences the highest prices for the year due to :-

During 2015, the Chinese government published its 13th five-year plan covering all policy areas for the period 2016 to 2020. One of the important agricultural policy announcements was a major change in the approach to food policy driven by a decision to increase imports in critical areas rather than continuing to subsidise the growth of the national farming capacity. Another change of strategy is the plan to improve domestic food production efficiencies through shifting support away from small farmers towards skilled operators managing large scale farms to improve overall agricultural productivity.

All this should lead to increased demand for Australian cattle and beef combined with even greater price volatility during the transition period which could easily last for a decade or more. Out with the old production systems… …and in with the new