Slaughter steer prices surged higher towards the end of April in line with demand driven by the annual festival of Ramadan and short supply. Rates rose from an average of Rp48,000 per kg live weight last month to around Rp50,000 at the end of April.

The Indonesian government has actively kept the pressure on the suppliers of all food commodities across the nation with the view to ensure that consumers are not unfairly hit by unreasonable price gouging during this traditional period of peak demand. The three commodities which are most under the spotlight are chilis, beef and sugar.

Unfortunately, live cattle importers continue to have their margins squeezed by record Australian cattle prices which make it virtually impossible to make a profit even with the rise in the domestic selling prices noted above.

As a rough guide, with a feeder steer delivered Darwin at AUD$4.20 per kg live weight, the CIF price would be around Rp60,000 per kg landed in the feedlot so even the most efficient feedlots are unlikely to be able to make up this level of deficit with value adding.

Advice from some feedlotters indicated that sales numbers were reasonably high in line with the festival demand despite the high prices.

At the wet markets, fresh prices rose from Rp135,000 per kg last month to Rp145k at the end of April while the supermarkets that we monitor in this report provided some welcome discounts.

See the photo below showing knuckle which normally sells for Rp157k in Superindo down to Rp142,000 per kg. Wet market chicken prices also rose from Rp40,000 per kg in March to Rp45,000 during April/Ramadan. A welcome 10% discount for knuckle from the Superindo supermarket chain. The chicken prices in this BSD city wet market rose 12.5% during April.

Total Indonesian imports for March ended up at just under 36,000 with the majority of shipments leaving from Townsville (26,027) where both supply and prices were a little easier than Darwin.

Other shipments left from Darwin (5,484) and Wyndham (3,801). This import level continues to be lower than recent averages resulting in a current estimate of feedlot capacity at around 30%.

With continued slow imports and a high outflow during Ramadan and Lebaran celebrations this number is likely to continue to contract until northern Australian cattle prices ease in June/July.

While feeder prices have always gone down during the peak mustering and selling period in the middle of the dry season, this year, the supply of feeders (from a smaller herd) is lower than usual so the price decline is not likely to be as dramatic as in previous years.

In addition, seasonal conditions across the north are now generally quite good so there is not a great urgency to sell stock to preserve pastures for the rest of the year as generally stock numbers are down and pasture reserves are plentiful.

In the past, live exports has been virtually the only economic option for northern feeders but now that the rest of Australia remains desperately short of cattle, sales of young cattle to Queensland for fattening on grass and in feedlots followed by domestic slaughter is a real economic alternative.

The pandemic continues to exert its effects in a variety of ways with imports of frozen Indian buffalo beef reduced due to worries about Covid contamination.

13,000 tons of Indian product have been received this year and declared safe although there are likely to be delays for imports of the remaining 67,000 ton quota until concerns over the rampant Covid infections in India are better understood.

The Indonesian economy also remains constrained due to the low level of vaccine supplies requiring the population to continue to control the virus through PPE, distancing and hygiene measures which combine to restrict business activity.

Darwin feeder steer prices remain high with AUD$4.20 the quote at the end of April. Townsville prices were still strong throughout April at around $3.80 for slaughter steers.

Slaughter rates remained steady once again during April with the indicator rate for steers still at Dong82,000 per kg live weight.

The most important indicator however was the number imported during March which was zero!

This figure provides a much better summary of the current situation which is extremely serious.

There is no real surprise in this number as in recent times Vietnam has imported 89% slaughter cattle and 11% feeders meaning that the capacity for value adding to make up for the dramatic difference in buying and selling price is insignificant.

With the buy price in Townsville holding at about $3.80 plus a total delivery cost at say $1, the CIF price in Vietnam is close to AUD$4.80 while the selling price for April (see above) is $4.58. This must result in a substantial loss regardless of how the best traders are able to squeeze their margins. At the same time, domestic wet and supermarket prices for fresh beef remain steady.

It’s hard to see any relief for importers for a long time as even with the expected northern Australian dry season price declines it is unlikely that Aussie prices will fall to a point where a profitable slaughter animal import is possible.

A decline to this level is certainly possible during the dry season but most comentators doubt if it will go much lower so at best the Vietnamese importers might be able to break even.

The other possible saviour is a dramatic weakening of the Aussie dollar but the outcome of currency fluctuations is one parameter that I am confident nobody can predict. 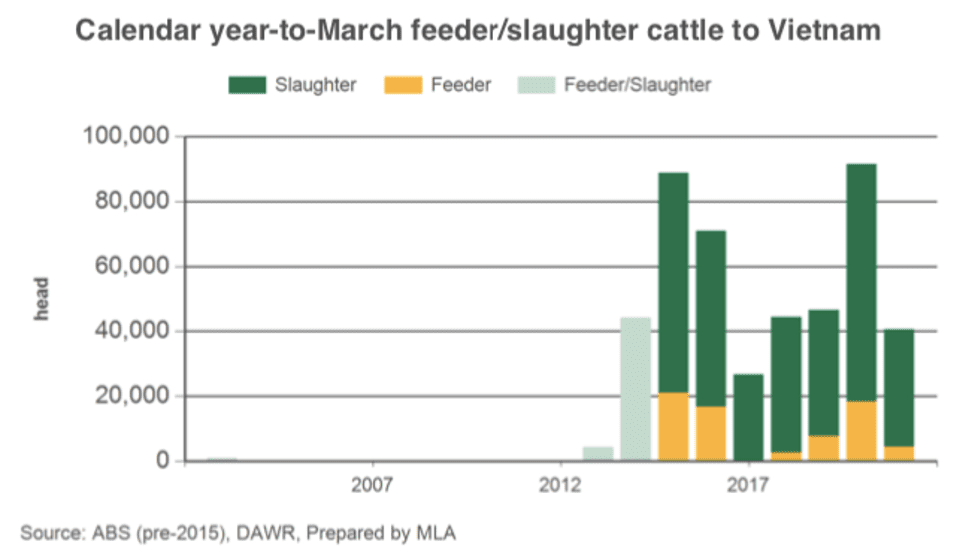 China slaughter cattle prices are moving in the opposite direction to the rest of Asia with a 5% reduction in live prices during April.

China reports that their GDP growth is on the rise so I am not sure why cattle and beef prices are declining at a time when economic growth is increasing.

Even wet market chicken and pork prices have come down a few percentage points.

My Thai sources also advise that the border from Myanmar to S W China at Muse is firmly shut to all trade including live cattle as a result of the political problems in Myanmar.

No change in slaughter rates once again this month with little to report as the economy seems to be treading water with no great forces either up or downward. ASF remains an issue but not to a level that is seriously affecting cattle prices.

Slaughter cattle prices are on the rise once again with a combination of a total closure of the Myanmar border and an increase in interest from Vietnamese importers.

There is no surprise that the Vietnamese importers are looking to alternatives to replace Australian slaughter cattle so with a rate of around AUD$4.46 in Thailand and a slaughter price in Vietnam of AUD$4.58 demand for Thai fat cattle is on the rise.

Unfortunately for the Vietnamese buyers, the cattle herd in Thailand is too small to allow for the supply of both the domestic Thai and Vietnamese markets. Cattle supply is restricted even further by the lack of feeder cattle availability from Myanmar.

My reporter advises that if the Vietnamese begin to take large numbers from Thailand then the price of slaughter cattle is likely to reach Baht120 per kg or even higher.

At a rate of B120 a slaughter steer will cost AUD$5 per kg in Thailand at current exchange rates so there appears to be little relief available here for the Vietnamese importers and consumers.

Question: What strategies are available to assist our customers to reduce the cost of their beef without dropping our prices?

One alternative is to supply them with cattle that will produce a better carcase at slaughter.

While modifying breeds across northern Australia is an enormous undertaking it is never the less well worth considering as there are very few alternative means of supplying cattle at the same price that will deliver a higher profit margin for the importer.

Terry Nolan recently won the Beef 2021 carcase contest (both grand and reserve champion) with Blonde d’Aquitaine cattle with a dressing percentage of 65.6% from 250 to 318 kg carcases.

The animals live weights would have ranged from about 384 to 489kg. Fat measurements were at the low end of the scale at around 6-8 mm. While these pure bred European cattle are not suitable for northern herds they do cross well with Bos Indicus cattle with resulting hybrid vigour.

I took the photos of the young bull below at Ian Fox’s Renard Blondes stud in Cobram, northern Victoria. These cattle produce a superior carcase with low levels of fat which would suit our Asian customers desire for minimal fat trim. They have also demonstrated exceptional performance in the feedlot.

I attended a presentation at the NTCA conference in Alice Springs last month and learned that if you are able to improve the performance of your animals then you may be eligible for carbon credits.

A more efficient cross bred might well tick this box and provide the producer with additional income. Worth further investigation. These cattle are “all beef” and cross well with Bos Indicus cattle with the capacity for the resulting crossbred to produce a leaner and more profitable carcase for our Asian customers.