Slaughter steer rates eased a little this month once again moving from Rp50,000 per kg live in June to Rp49,500 at the end of July. This decline is a result of multiple factors with weak wholesale and retail demand being the most important. As the pandemic continues to escalate across Indonesia, consumers have less to spend and less opportunity to buy with lockdowns affecting marketplaces and food outlets through reduced or zero trading hours respectively. Declining demand has caused some fat cattle to remain at the feedlot after reaching their ideal market weight leading to rising numbers of overfat cattle which always results in a vicious cycle of holding back for a better price followed by even higher levels of fat leading to further declines in prices offered by butchers. This photo from the Pasar Modern wet market in BSD City, Jakarta, is a good example of how lean Indonesian customers prefer their beef.

Retail beef prices for knuckle have declined slightly from Rp155,000 in June to Rp152,000 per kg. The most notable issue for July is the absence of Indian buffalo meat (IBM) in the supermarkets as it appears that there have been major problems in supply from India. Staff at Carrefour in BSD City advised that when IBM was available briefly in July the price was a record Rp120,000 per kg (Rp85,000 in June).

With the national lockdown continuing through the Qurban festival of sacrifice (20th July), it is likely that there will be higher numbers of local slaughter bulls available across the whole market which are expected to further depress demand as these bulls re-enter the normal domestic supply network.

The information below is from an Islamic charity in Australia called Human Appeal which receives donations and sends packages of meat and other types of aid to needy people in the countries listed in the map below. At the end of June the daily covid case average was about 20,600. At the end of July this figure was over 39,000 per day. Lockdowns have been extended in order to control these rising figures so it seems likely that retail demand will remain weak at least through August and possibly longer. 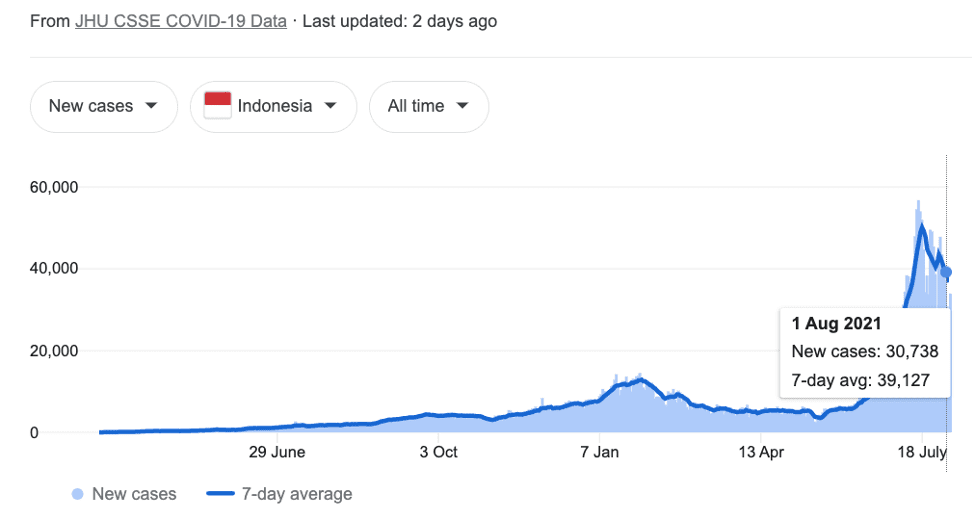 Darwin feeder steer prices remain at historically high levels with the Darwin price at AUD$4.05 at the end of July with quotes ranging $4 to $4.15. Townsville heavy ox continue to hold steady at around $3.85 per kg live weight.

Slaughter rates in Dong continue to hold steady at their recent levels during July although it is difficult in all markets to get a good feel for pricing as my agents along with everyone else are severely restricted in their access to physical markets and flows of reliable information. Lockdowns in Vietnam are so tight in some areas they have included some abattoirs, wet markets and retail food outlets. If not totally closed, many have restricted operating hours.

At the end of June, new covid cases were running at around 750 per day. By the end of July that figure had risen to almost 17,000. 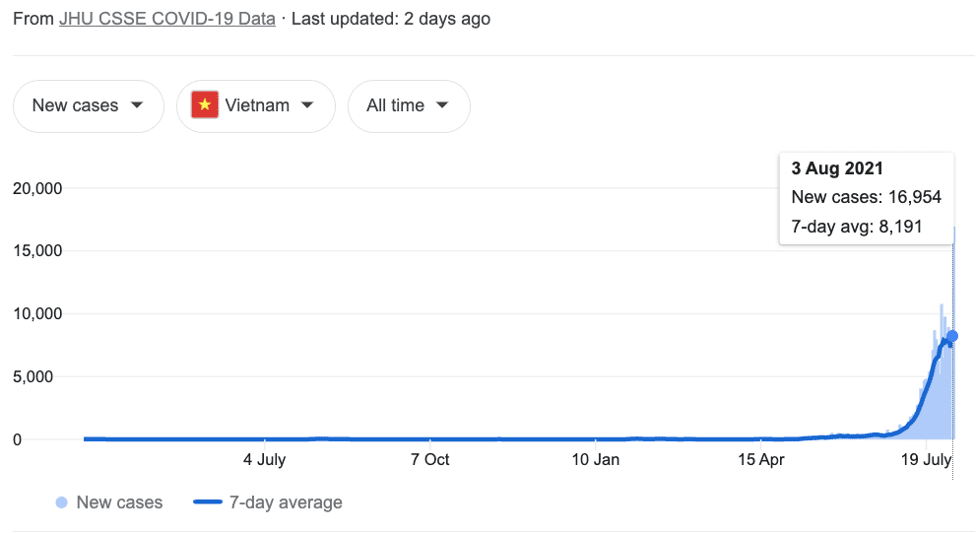 The graph above is from the JHU showing the extreme spike in cases at the end of July.

Vietnam reported its first case of Bird flu (H5N8) during July to add to its virus woes. Fortunately, this strain presents only a very limited threat to humans. The map below shows the extensive large ruminant movement pathways across Asia and the Pacific. Small ruminants and pigs would have similar movement patterns. Given this huge trading network, it is not surprising that diseases such as ASF, LSD, Foot and Mouth Disease (FMD) and Bird Flu have spread so rapidly across the whole Asian region.

Aggressive online marketing with knuckle discounted to Dong 250 per kg. Live slaughter cattle prices continue their climb while pork prices are sliding even lower. Slaughter cattle price averages lifted from Yuan 34.4 per kg live weight in June to 35.9Yuan at the end of July. This curious disconnect in the price for China’s two favourite meats is posing an interesting question to outside observers who are divided in their explanation as to the reason. One argument is that pork production has recovered so successfully it is now in a position of oversupply while the alternative proposition is that this glut of pork product entering the market is a result of massive emergency slaughter numbers driven by a major resurgence of ASF. Regardless of the reason for the fall in pork prices, why aren’t the Chinese consumers rejecting expensive beef in the face of plentiful cheap pork which, in my understanding, is their most favoured meat of all. We will have to wait for much more information to become available before we can hope to answer these questions. With official July figures from Johns Hopkins University reporting that China’s new daily Covid 19 cases is 99, it is difficult to have any confidence in official records. This is a graph produced by the Economist magazine using figures from the World Bank. If these figures are correct the implications for GDP growth during the last 5 years are alarming to say the least.

During July China experienced massive floods in the Henan province amongst others. This area includes the North China plain which is one of the most fertile agricultural areas in the country. Henan is also a major manufacturing and distribution hub with Apple and Nissan factories among those wrecked by the flood waters. It is expected that the resulting disruptions will have major impacts on domestic and international supply chains.

Rates for slaughter cattle and retail beef remained steady again during July. The Philippines appeared to have their surge in Covid cases during April but are only just now seeing a sharp rise in cases towards the end of July. See graph below. 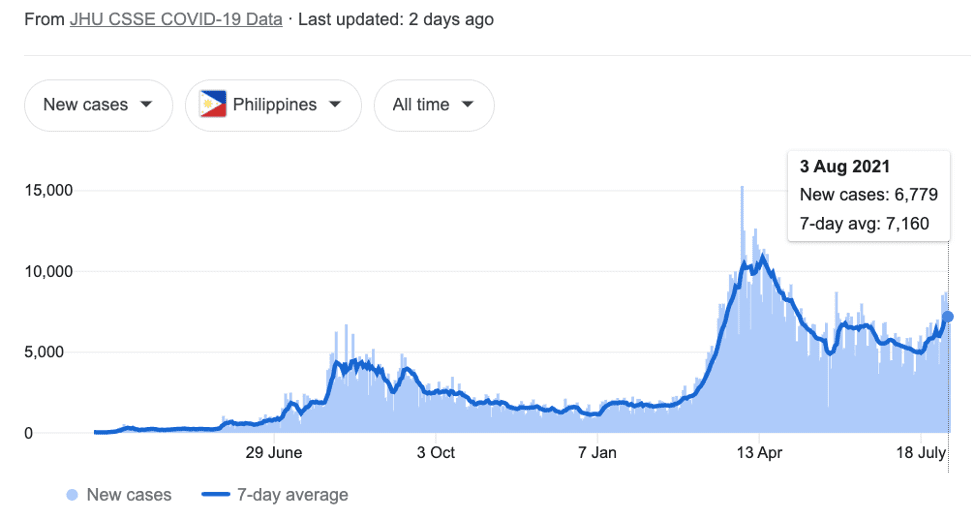 July has seen a huge slump in slaughter cattle prices falling from 100THB last month to 90 THB at the end of July. My reporter is severely restricted but has been advised that one of his contacts who normally kills 400 per month was only able to slaughter 100 head for the whole of July. At the beginning of the month new Covid case reports were around 6,000 per day. As the JHU graph below shows, at the end of July the daily average was over 16,000. 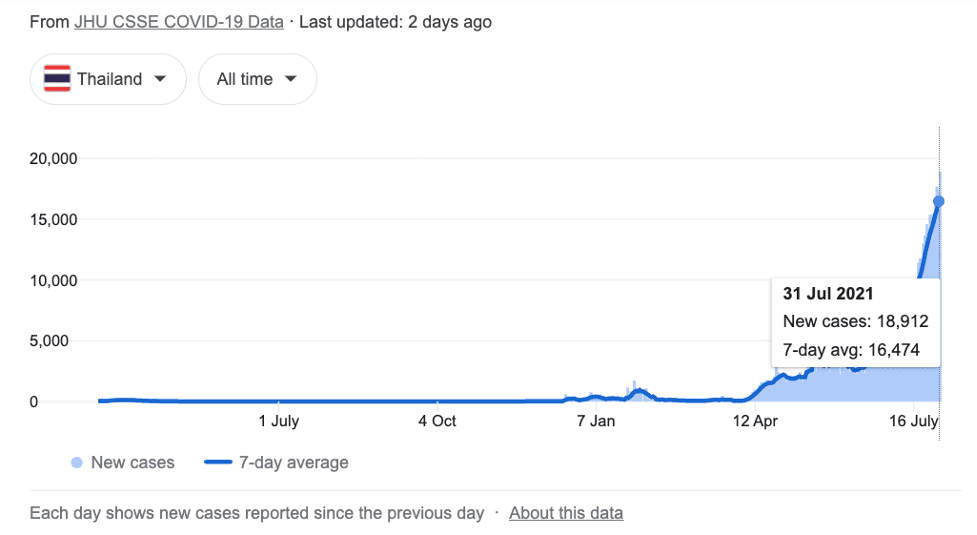 LSD from Thailand has already made its way to Malaysia where it will now present a threat to Indonesia. Smuggling of Indian buffalo meat is a normal part of daily business across the Malacca Straits although I expect very little of this illegal activity involves live cattle. On the other hand, ASF entered Indonesia in this way so I am sure Indonesian authorities will be taking great care to ensure it does not get a chance to establish in Sumatera.

Malaysian advertisement presenting opportunities for citizens to donate money during the festival of sacrifice to be converted to beef and goat meat to be sent to needy Muslims in Mindanao (Philippines), Cox’s Bazar (Bangladesh, near the Myanmar border),  Arakan ( Muslim area in Myanmar just to the south of Cox’s Bazar),  Palestine, Yemen and Syria. Lembu is cattle bulls with the per head price shared by 7 contributors while the kambing are goats sold as 1 head per customer. Northern Mexico is also suffering from a severe drought along with the US. This desert area is home to large numbers of Bos taurus cattle which are traditionally sent either live or as box beef into the US. The bush fires in Greece and Turkey in the news at the moment would also suggest that severe drought conditions are present in other areas of the northern hemisphere.