Demand is firm although prices are stable with the indicator rate remaining at Rp40,000 per kg for July. Higher rates are available for good cattle in some locations but it appears that in general lot feeders have been happy to sell increasing volumes at similar rates to June.

I am advised that small quantities of Indian buffalo beef have arrived but volumes are still not enough to support the previous level of demand. Traders report that alternative supplies of low price Aussie and NZ frozen products are also in very short supply. This might be due to a sudden surge in demand but also perhaps because better prices are available in other markets. The result is that a significant volume of fresh beef from the slaughter of imported cattle is once again being purchased by the low end food service sector that had previously switched to cheaper Indian product.

The important question is when will large quantities of Indian beef be available once again.

While nobody in government has explained the reason for the sudden decline in imports, I still suspect that this is a result of reduced access associated with FMD free (with vaccination) areas of India limiting volumes available for import.

Whatever the case, lot feeders will be happy to fill the gap in demand and are importing much larger numbers of feeders than anyone would have predicted (especially me) in order to: Giant Supermarket in BSD Jakarta with knuckle selling for AUD$19.55 per kg. Discounting seems to have disappeared now that the Indian beef is missing from the shelves.

The Muslim festival of Qurban where male cattle, sheep and goats are slaughtered and the meat donated to the poor will be celebrated on the 11th of August. The allocation of very large numbers of male animals to this very important festival means that local cattle normally available for domestic fresh beef are diverted to this special event producing a shortage in supply of local fresh beef which will probably become another bonus supply opportunity for local lot feeders as long as Indian beef isn’t available to fill the gap.

The two critical rates for this trade are the local slaughter price and the north Australian feeder price. Given the importance of the feeder buy price I have decided to add the Darwin Feeder Steer rate to the monthly graph at the top of this report. As a crude rule of thumb, the live export costs for all of our Asian customers excluding China is roughly AUD$1 per kg live weight so the CIF price can be estimated by simply adding AUD$1 to the Darwin feeder rate. The Darwin feeder rate was fairly steady at around $2.95-$3.00 towards the end of July which no doubt helped convince importers to confirm as many future shipments at this rate as they could. Predictions are for $3.15 by mid-August.

Earlier forecasts that northern Australian feeder cattle supplies would dry up by July have proved to be incorrect with another massive month for Indonesian imports of approximately 52,000 head. Wellard sent the MV Ocean Drover from Townsville to Indonesia with 18,000 head loaded for discharge at Jakarta (about 12,000) and Lampung (about 6,000). One more full Ocean Drover is scheduled for August.

Another milestone passed this month with the announcement of the closure of the remaining business activities of PT Elders Indonesia. After selling their feedlot and abattoir assets last year they continued to operate their meat importing and distribution business but the decision to close this final chapter was recently communicated to customers and staff with final closure due in a few month’s time.

The live cattle and beef business are a difficult sector to operate in anywhere in the world, just ask the Australian producers with their massive drought. But Indonesia presents an even greater degree of difficulty as a result of  the government policy of importing Indian beef.

Unfortunately, the two broad (and admirable) policies of the government to (a) reduce the cost of beef to domestic consumers and (b) encourage the expansion of the domestic cattle herd in order to increase local beef production are in total conflict. It is not possible to encourage local beef producers to expand their activities when their business case is crushed by cheap Indian imports. The Indonesian government is in a no win position here as it must make the unenviable choice between low cost protein for the majority of their vast population or high beef prices that are essential to retain and encourage local beef production. Photo from Dr Dara Cut: Pak Supardi with a very affectionate male progeny of Australian brahman cross breeders imported to his cooperative breeding and fattening project in Lampung, Sumatera. The performance of the cattle in this cooperative has been exceptional. This is part of the display at my local supermarket in Bali with both imported (Harvey) and local (Bali cattle) beef. Harvey tenderloin is selling for AUD$52.25 per kg while Harvey Rib Eye is AUD$29.20. Local tenderloin is AUD$17.90 with local striploin at AUD$15.00 per kg. Local mince is $13.00 per kg.

Prices remain firm in Vietnam with the weakening AUD making imported cattle a little more attractive. The indicator rate remains at Dong73,000 per kg live weight for slaughter steers. Prices for beef in the wet and supermarkets have not changed significantly while chicken prices have increased quite a lot during July. This may indicate a move to chicken as a result of the African Swine Fever (ASF) problems which continue to devastate the national pig herd. See map below from the FAO showing that the disease has spread through every region of Vietnam as well as its neighbours in Cambodia and Laos. 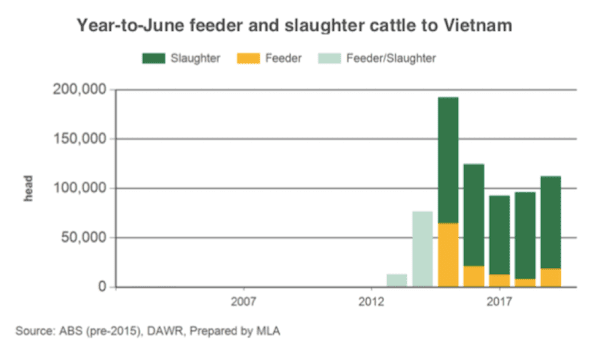 The current market is split into about 80% slaughter weights and 20% feeder types. Recent improvements in feeding systems will ensure that feeders will gradually become a much more important part of the trade as efficient lot feeders can achieve substantially higher margins by feeding cattle rather than simply importing fat cattle for a trading margin. Also in the local press during July were a number of stories concerning the Australian Ministry of Agriculture announcing serious violations of Australia’s ESCAS requirements. All Australian cattle must remain within an approved supply chain until slaughtered in approved facilities. The case mentioned in the press noted that more than 1,500 cattle and 99 buffalo had left their supply chain and were unable to be traced, a very serious breach of the regulations.

Slaughter cattle prices in Yuan have remained stable during July with the weak AUD accounting for the rise in the A$ price above. The main market feature of note is the continuing rise in pork prices. The reported price in Shanghai rose from Y24 in June to Y26.8 in July, 11.7%. The recent USDA GAIN report on China forecasts that “by the end of 2019, the total swine inventory will be down 13% to 374 million head. Pork production will decrease by 5% to 51.4 million tons with the reduced supply only slightly offset by weakened demand. To cover the domestic supply gap, China will increase pork imports by 33% to 2 million tons.”

“China, for the first time in history, has become Australia’s largest export beef market by volume, surging past traditional big-hitting customers Japan and the United States in trade conducted during July” – as reported by Beef Central. Photo from the internet : And this is the Chinese Year of the Pig!

Prices remain steady this month with the slight rise above in A$ price due to the weak Aussie $. The meteoric rise in the local price of slaughter cattle that I have been reporting has failed to translate into an increase in live cattle imports.

Given the huge rise of about AUD$2 per kg I had begun to suspect that my information may be incorrect so I checked with an old friend who was a significant importer when the Philippines was our major live cattle customer and he confirmed that the prices I have been reporting are indeed correct. He also advised that despite the dramatic rise in prices he was still not attracted to recommencing importation. Photo from Peter Watkins who was in the Philippines recently and sent these photos of a very busy wet market. More from Peter Watkins showing plenty of action at the early morning market. Photo from Peter Watkins : Pork remains the favourite meat in the Philippines which is thankfully still not infected by ASF. Photo from my agent in Mindanao : a supermarket offering local rib eye for AUD$15.56/kg. Mindanao: This rather ordinary looking local T-bone is selling for AUD$20.80. Slaughter cattle prices have edged up again from 92 Baht to 95 Baht per kg live weight this month as supply remains weak and the entry of a new element in demand as the Vietnamese are once again buying Thai live cattle for their domestic needs.

Thailand remains one of the few countries in S E Asia that has not been infected with ASF.