Slaughter cattle prices saw a small rise at the end of the month probably associated with the festival of Qurban on the 30th/31st of July. Some importers were able to push their rates up from Rp40,000 to Rp41,000 so I have set the indicator rate for July at Rp40,500 per kg live weight.

While Indian buffalo meat is back in the retail market its availability remains limited so this may also have contributed to the slightly higher demand for live cattle.

Qurban demand was subdued as would be expected given the economic impact of the virus restricting people’s ability to make charitable donations for the slaughter and distribution of meat from cattle, sheep and goats. Many mosques asked donors to slaughter their stock in a local abattoir then deliver the packaged meat to the mosque in order to reduce the numbers of people concentrating in the grounds. Prices for Qurban cattle were in the order of Rp65,000 per kg live weight for local Bos indicus and crossbred cattle with Rp63,000 for Bali cattle. Slaughter numbers have been estimated to be about 40% down on previous years. Photo from the ABC showing Bali cattle (left) and euro-crossbreds in a temporary facility being fed on concentrate and rice straw in preparation for the Qurban festival.

The June import number hit a high of around 67,000 head which is quite a spike after a long run of monthly figures in the 30,000 to 45,000 range. Once again, this rise is probably related to advance orders placed when the feeder prices were extremely low in April this year.

The graph below from MLA shows that the general trend in exports remains roughly in line with the previous 5 years. 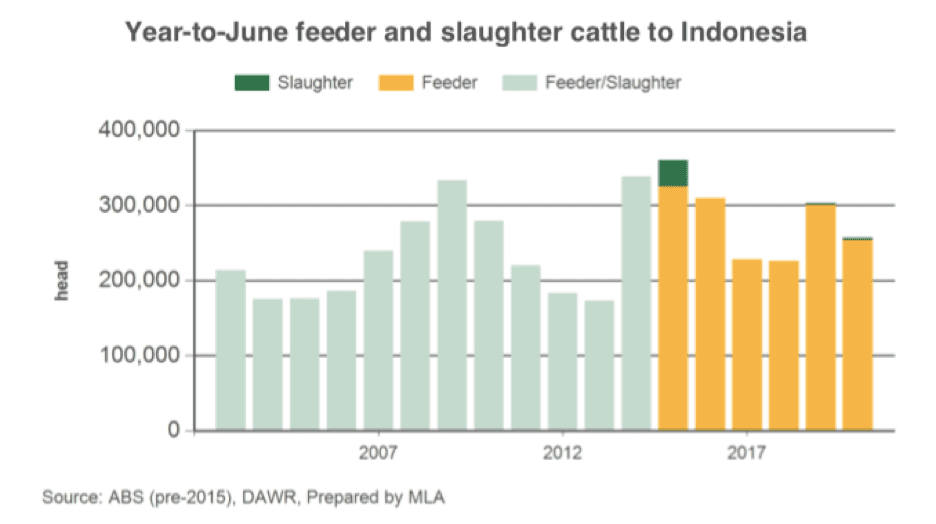 This frozen Indian buffalo has just reappeared in the cabinets at the Giant supermarket in BSD city, a suburb of Jakarta. Given its very unattractive appearance it is not surprising that it must sell at the discounted rate of Rp82,500 per kg or AUD$8.09 per kg. Everyone is wearing masks at the busy Pasar Modern wet market in BSD city.

Darwin feeder steer prices continued to move higher during July to end the month at around $3.50 per kg live weight.  Cattle are always harder to find at this time of the year in both the NT and Queensland but numbers still keep coming as the shipments in July remain strong.

Rates for slaughter ox in Townsville have eased a little to around $3.35 at the end of July following a reduction in prices offered by the Queensland processors.

Prices for slaughter cattle were once again steady during July at Dong 72,000 per kg live weight. June import data shows that 32,300 head were imported, another strong month, well above recent averages of closer to 20,000 head. July shipments are expected to be of a similar magnitude.

The graph from MLA below shows that imports have been heading strongly higher since 2017. 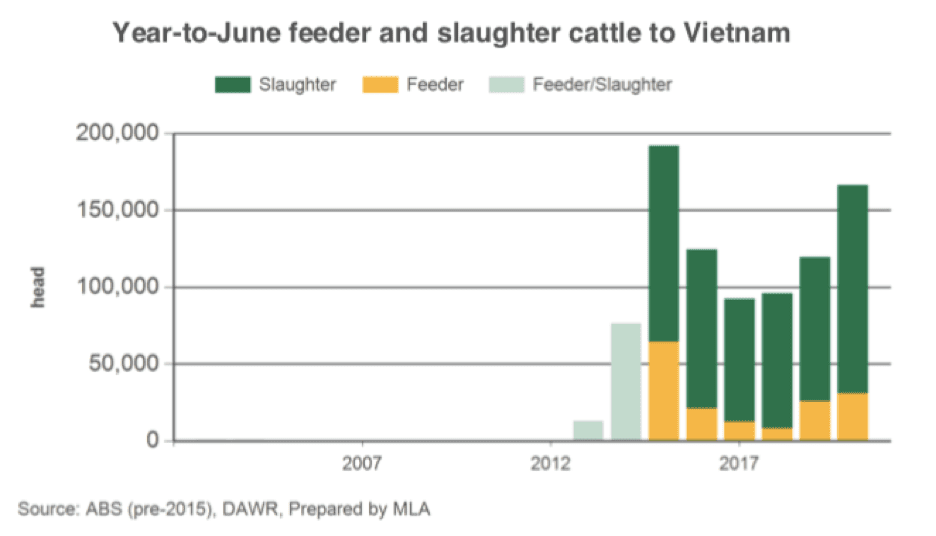 The African Swine Fever (ASF) outbreak continues to hammer pork supplies with reports of live pig prices (Dong 88-93,000 per kg live weight – I assume breeders) making them similar to or higher than live cattle for the first time on record. See the OIE summary map below showing ongoing and new outbreaks in the middle weeks of July. A large proportion of these ongoing outbreaks are located in Vietnam and its immediate neighbours. These huge pig prices will no doubt be a part of the justification for the surge in imports of live cattle. Given the very long time it takes to halt the march of ASF and then rebuild the industry, it will probably be 2-3 years at least before local pig prices return to pre-ASF levels. Some live pigs are being imported from Thailand which has done a great job to keep the disease out of their country. See photo below.

Vietnam demonstrated extremely effective action when it controlled the initial outbreak of Covid 19 but now there is a second wave which has impacted Da Nang City, a major regional centre and tourist icon. Let’s hope they do a better job dealing with it than Victoria. Slaughter cattle prices were slightly higher during July although the AUD rate above is the same as last month due to the strengthening of the Aussie currency.

Some wet markets are once again open in Beijing as one of my fresh beef quotes this month is from a market that was closed in June.

In 2017 there appeared to be a strong likelihood that the trade in slaughter cattle from Australia would take off with the potential for a massive new market for live cattle exports from Australia.

The graph below shows very clearly that this potential has not been realised although the export trade in dairy cattle has continued to increase.

Nobody has been able to provide a satisfactory explanation as to why the Chinese authorities have not modified the import health protocol in order to allow the live slaughter and feeder cattle trade to develop. 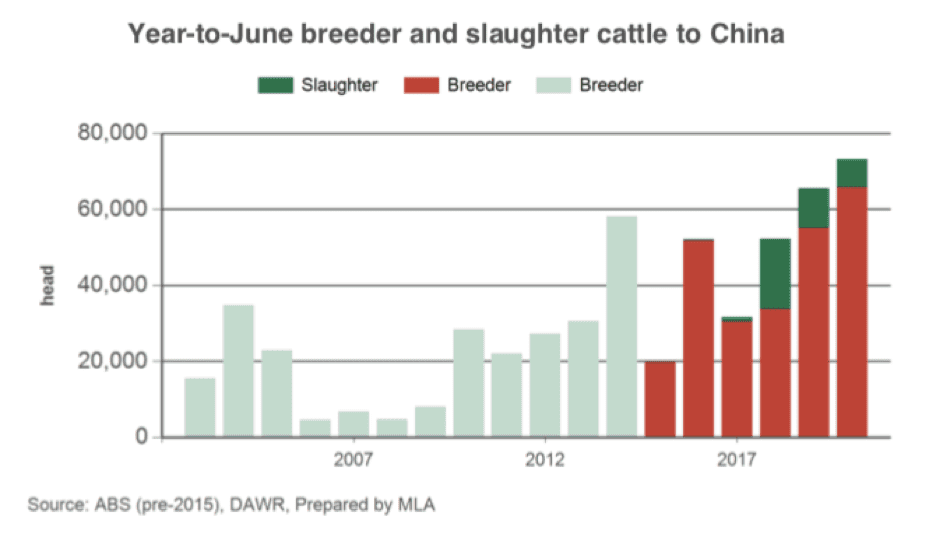 No change in prices again this month. One shipment of 2900 head was delivered from Australia to the Philippines in June. Retail beef, along with other food prices remains remarkably steady during this disruptive pandemic period. Surprisingly, this also includes pork prices despite the significant damage being done by the ASF outbreak in both Luzon and Mindanao. See the OIE map above.

I am currently sailing on the MV Gelbray Express owned by the Vroon Group, a Dutch company. The captain told me that Vroon has around 150 vessels of all types ranging from 14 livestock carriers to tankers, rig tenders, car carriers, bulk carriers etc. During the pandemic, business for all classes of vessels is very slow except for the livestock carriers which are fully employed.

After my recent voyage from Darwin to Vietnam, the vessel called in to Manila for a long overdue crew change. Some of the crew had been onboard for as long as 12 months. The captain had been on for 11 while the bosun was very happy to be going home after 9 months onboard. Despite their long overdue crew change, the performance of their duties continued at a very high professional standard. This very happy crew (those not on duty) is celebrating both the Captain’s birthday (Marlon Murillo, green shirt centre) as well as going home to friends and family the following day in Manila. Suckling pig, an essential component of any Filipino celebration. Nick Caacbay was our very capable Bosun on the MV Gelbray Express. The bosun on a cattle ship is essentially the “head stockman