ESCAS conditions do not currently apply to the tens of thousands of breeding and dairy cattle exported from Australia each year, and apply only to the export of feeder and slaughter cattle.

ESCAS rules require exporters to maintain full traceability and ‘line of sight’ on all feeder and slaughter cattle they send overseas right through to the point of slaughter, and to ensure they are handled and processed only through facilities and abattoirs accredited to Australian standards.

The export industry has previously argued that it would be impossible to maintain ‘line of sight’ for dairy and breeding cattle through to the point of slaughter as they can be dispersed widely in export markets and can live for many years before processing.

The RSPCA has described the lack of ESCAS protections for breeding or dairy stock as a “gaping loophole”.

The catalyst for its call today is an ABC report showing images and footage of starving, sick, dead and dying dairy cattle exported by Wellard from Australia to Sri Lanka.

“This is truly a tragic set of circumstances in which both animals and Sri Lankan farmers have been let down,” said RSPCA Australia Senior Policy Officer Dr Jed Goodfellow.

“Sadly, it’s a case of another day, another live export disaster.

“It shows the inherent risks of sending Australian animals half-way around the world into countries with significantly different climatic conditions and limited means and capacity to handle and raise Australian animals to acceptable welfare standards.

“Australian exporters have a duty of care to animals they’re sending overseas. That duty doesn’t stop at the point at which they get paid.”

The RSPCA said it highlighted the loophole when ESCAS was first introduced in 2011 and had repeatedly called for the Australian Government to close it.

“The only reasonable action now is for the Australian Government to immediately halt the export of animals under this deal with Sri Lanka, and for the ESCAS to be reviewed and expanded to better protect exported dairy and breeder animals.

“The industry has been warned repeatedly that the Australian public will not stand idly by as live exporters continue to jeopardise Australia’s international farming reputation, and condemn thousands of animals to slow and painful deaths,” said Dr Goodfellow.

The RPSCA said a previous ABC investigation in 2012 also revealed horrific conditions for Australian dairy cattle live exported to Qatar, with hundreds dying as result of not being provided with adequate food, water and shelter in the desert conditions.

Two weeks ago Wellard released a statement reporting the mortality rates of two shipments of dairy heifers to Sri Lanka, saying it was making changes to farmer selection criteria in the dairy heifer export program with the Government of Sri Lanka. 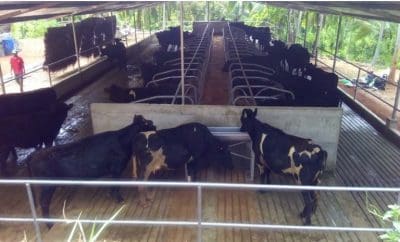 It said four of the 68 Sri Lankan farmers selected by the Sri Lankan Government to receive some of the 5000 cattle shipped farms recorded mortalities from that shipment. It said the farmers had failed to follow the prescribed herd management advice processes, which had caused some animal welfare issues on those farms, and for this reason farmer selection criteria would change in future.

In its statement Wellard said recent research literature indicates that the mortality in dairy herds in developed countries with high culling rates around the globe is 6-7pc.

It said Sri Lanka was a developing country with low culling rates, with heifers in the shipments being first calvers.

In the statement Wellard chiarman John Klepec said the Sri Lankan farmers where mortality rates had been recorded were ignoring advice, particularly on nutrition, and animal health is falling to the point of mortality.

“So while we are continuing to seek immediate changes to the nutrition management on those farms, we must also change the Sri Lankan farmer selection criteria for future shipments so a) the negative animal welfare outcomes that have occurred on these few farms are not repeated and b) other farmers in the program are not tarnished by the results of few.”

From the commencement of the program Wellard said it undertook the following steps to help achieve the program’s objectives and to maximise animal welfare:

“The due diligence, training and oversight undertaken by the Sri Lankan Government and Wellard has worked in the majority of circumstances but has failed in a few. We strive for 100 per cent success and the changes we will make will help us progress towards achieving that goal,” Mr Klepec said.

It said 84 million litres of milk had been produced by the cows since the program began (including the pilot program in 2013), replacing US$32 million of milk powder imports for Sri Lanka.

Wellard said that although tethering was an accepted part of herd management in Sri Lanka, it had not delivered heifers to any farms where tethering was performed. As part of the selection of eligible farmers to receive the Australian and New Zealand cows, the Ministry did not allow heifers to go to farms that tether cattle.

“We are proud of our role in helping developing countries provide nutrition to their citizens and to increase the herd management skills of local farmers,” Mr Klepec said.

“Sri Lanka is a developing country and we cannot expect them to reach Australian standards overnight. They will however get there.

“Already the number of feed manufacturers has doubled, there are new veterinary medicine, pharmaceutical and dairy equipment suppliers companies in the country and more than 5000 farmers have attended herd health and nutrition training programs. So the program is causing positive change.

“However, these advances cannot be at the expense of animal welfare. We have extended our technical support program beyond the contracted period and we are working hard to rectify the outstanding issues on the relevant farms and prevent future issues.”

A Shorten Government will address the ESCAS gap: Gitzgibbon

He said Sri Lanka incident highlighted a gap in the regulatory regime which offered no assurances on animal welfare for the export of non-slaughter animals.

“A Shorten Labor Government will address that gap,” he said.

“We will also review the powers in the relevant legislation which currently denies the Regulator any power to test the likely welfare outcomes of non-slaughter live animals in export markets when issuing an export permit.

“Despite Minister Littleproud’s huffing and puffing, it is clear the Morrison Government is still not taking animal welfare issues seriously.  The Government’s inaction is letting our producers down and raising community concerns.”