QUESTIONS have been raised about the future of a livestock export industry-developed global animal welfare assurance program which has yet to be implemented, despite having received $8.3 million in Commonwealth funding to support its introduction four years ago. 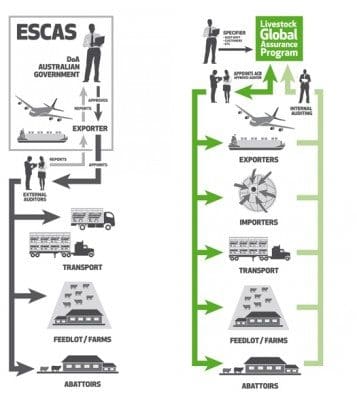 Images released in 2016 to illustrate how LGAP compares to ESCAS. Click on images to enlarge.

The Australian Livestock Exporters Council has attributed delays in the implementation of the Livestock Global Assurance Program (LGAP) to problems created by the COVID pandemic, and the inability to have face-to-face engagement with customers in supply chains.

Meetings have been held with a range of industry bodies and stakeholders in recent weeks in an attempt to plot a path forward for LGAP amid concerns the concept has still not secured the vital in-market acceptance from import customers it needs to succeed.

It is understood a review is also now underway to analyse market acceptance issues with the LGAP program which will take place over the next six months.

ALEC has told Beef Central that over the last three years AniMark, the company constituted by industry to oversee LGAP, has been working to create the LGAP standards and rules and to become a third-party provider of ESCAS. DAWE approved this two weeks ago meaning that implementation of LGAP could only commence from that point.

In recent weeks there have been resignations of a number of key personnel in recent weeks from AniMark, including its chair and CFO.

In response to questions about LGAP’s future,  ALEC has stated in an article provided to Beef Central today that it is committed to the goals of LGAP, while stopping short of clearly stating LGAP will continue.

It says that while the delay in LGAP’s implementation is regrettable, it is confident “continual improvement can be made in assurances of animal welfare and to deliver solutions that will enhance the sustainability of our industry”.

The Livestock Global Assurance Program was developed by the Australian Livestock Exporters’ Council with MLA and Livecorp funding in 2015/16.

LGAP is designed to distribute the responsibility, oversight, and management of animal welfare proportionately along the supply chain through operators and facilities – more details on the differences between ESCAS and LGAP are outlined in this earlier article.

In October 2020 the Department of Agriculture, Water and Environment advised exporters reports from audits of supply chain facilities conducted as part of the LGAP process could be used to demonstrate compliance with ESCAS independent auditing requirements.

However at this point the future of the program looks unclear.

In June a formal review of ESCAS undertaken by the Inspector General of Live Animal Exports, Ross Carter, concluded that while ESCAS had been a successful reform that has largely achieved its broad objectives, it also had a range of issues and problems that need to be addressed to ensure that all Australian livestock exported for slaughter are treated in accordance with these standards and practices, and that the scheme is operating as effectively and efficiently as possible.

This included that the business processes for ESCAS applications were outdated and the underpinning technology did not facilitate accurate and easy applications from industry and does not support departmental decision makers in reaching efficient decisions.

The report also found that loss of control and traceability, sometimes with poor animal welfare outcomes, still occurred “at low but chronic levels”.

The review also examined potential third party providers such as AniMark who use a set of rules and standards called the Livestock Global Assurance Program (LGAP).

The report said some stakeholders raised concerns that the LGAP model dilutes responsibility away from exporters, making it difficult for the department to hold them accountable under the legislation.

The risk of a third-party provider failing in an acute way that could jeopardise a market, had also been raised.

Mr Carter said these were real risks the department needed to address to ensure it had sufficient oversight of third-party providers to be assured of performance, and that accountability mechanisms are effective.

The department must also retain a sufficient regulatory prerogative to intervene or take action if required.

However he said that if these risks can be adequately mitigated the proposed LGAP has a number of advantages.

LGAP provided an opportunity to address the chronic non-compliance issues, lift the bar on audit performance, set a level playing field, more efficiently investigate and correct non-conformance, and embed responsibility for achieving standards at the appropriate facility level in the supply chain.

This may obviate the need for some of the more traditional regulatory practice changes the inspector-general has identified.

Mr Carter’s report also drew attention to the Collective Standards for Animal Welfare (CSAW) program developed in 2018 by a number of exporters to address the high level of ESCAS non-compliance in Vietnam.

The report noted that the CSAW is built on collective, collaborative transparency and responsibility and reduces the risk of non-compliant facilities switching to different exporters or importers.

Members are accountable for any non-compliance and must take the necessary corrective actions and notify other members of an incident. The CSAW group contracts a third party to provide 24/7 CCTV monitoring to parts of their supply chains. The data is uploaded to provide real-time monitoring.

Mr Carter’s report said the system had the potential to reduce the risk of leakage from the group’s supply chains because any non-compliance can be seen immediately.

The system also allowed the group to provide strong evidence to the department if requested.