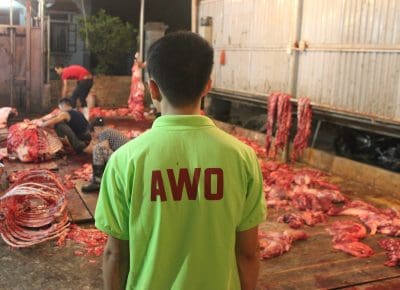 An Animal Welfare Officer at an abattoir in Vietnam.

The Department of Agriculture and Water Resources has released its latest quarterly report on the Exporter Supply Chain Assurance System (ESCAS).

Of that number the Department said it received two reports of non-compliance with ESCAS requirements involving supply chains in Vietnam, both self-reported by exporters, which it is now investigating.

During the period the Department said it also completed six investigations into earlier reported non-compliances, four in Malaysia and one each in Israel and Vietnam.

The Israel complaint was based on footage of dead cattle, lame cattle and an “animal appearing blind and distressed” taken in a stock transit facility in Israel which was reported to the Department by Animals Australia.

The Department said discernable ear tag numbers from the video showed that the cattle identified in the report were Australian cattle.

Its investigation revealed the cattle had been earlier held in a hospital pen in a quarantine facility after showing signs of lameness.

They were loaded for transport to an approved feedlot in a movement approved by the Israel Ministry of Agriculture. However, during the journey it was noted the cattle were not travelling well, and in the interest of animal welfare, a decision was made to unload the cattle at the transit facility for rest and treatment, where they were under the control and care of the approved importer.

The transit facility was not part of the exporters’ approved supply chain.

The department acknowledged in its report that it was necessary to offload the cattle at the transit facility on animal welfare grounds, and determined that the actions of the importer were appropriate. However, as the cattle were outside of the approved ESCAS supply chain, a major non-compliance was recorded against the exporter’s Israel supply chain.

The Department’s report said video footage showed one sheep being trussed and removed from the supply chain despite an exporter’s Animal Welfare Officer being present. Another exporter reported two sheep unaccounted for, and acknowledged its own representative had not been present during the time of the non-compliance.

The exporters reported the issue as being due to an out of control crowd event, but said security guards were positioned at entry points to avoid a recurrence over the following two days and no further non-compliances were observed.

The department temporarily suspended supply of livestock to the ESCAS approved feedlot and abattoir while its investigations were completed.

It has since required exporters to develop, review and implement market-based Supply Chain Management Plans (SCMPs), including Korban-specific plans, to be assessed by the department and implemented prior to Korban 2018.

The Department has required increased exporter in-market oversight, presence and verification processes of supply chain control and traceability systems as part of their SCMPs.

It has also raised the risk-rating of all sheep and goat facilities to medium requiring them to be audited twice a year.

The department says it will undertake ESCAS audits prior to Korban 2018 and ongoing audits of exporter compliance with their SCMPs once implemented.

It said that while crowd control may have been an issue earlier in the day, the video indicated it was not an issue at the time of the incident, and said additional oversight processes implemented by the exporters for the Korban festival were determined to be ineffective.

It recorded major non-compliances against both exporters’ supply chains in Malaysia, and against the facilities.

The Vietnam issue surrounded the removal from an approved feedlot against ESCAS requirements of 309 cattle, reportedly having been on-sold by the importer to an unapproved abattoir in China. The importer reported the cattle were stunned prior to slaughter and monitored by a veterinary officer.

The facility had previously been suspended for an earlier ESCAS non-compliance and re-approved by the department after corrective action had been taken.

The Department has again suspended the importer from the exporter’s supply chain, and recorded a major non-compliance against the exporter involved.

In a press release issued in response to the report, the RSPCA said further reports of cruelty in Vietnam and Malaysia made “a mockery of Australia’s live animal export laws”.

“These reports keep showing what we already know – that live exporters and the Australian Government have no hope of controlling how exported animals are treated in foreign countries,” said RSPCA Australia Senior Policy Officer, Dr Jed Goodfellow.

Dr Goodfellow said the only way to prevent the cruelty of the live export trade was to slaughter the animals humanely here in Australia, and export the meat.

“This is a win for animal welfare and a win for local jobs and regional communities,” said Dr Goodfellow.

A spokesperson for the Australian Livestock Exporters’ Council ALEC said exporters continued to support the accountable and transparent way that supply chain leakage and welfare breaches were publicly reported and regulated.

He said welfare breaches were never acceptable and that industry was committed to its ongoing work with importers to rectify welfare risks.