Exporters involved in Australia’s beef and cattle trade to Indonesia are today seeking to clarify a media announcement by Indonesia’s trade minister yesterday that the country will issue more import permits for this quarter.

The Indonesian Government initially released import permits for the July to September quarter for just 50,000 live cattle, well below the 200,000 head anticipated.

The scarcity of beef in the market has pushed prices for consumers in wet markets up to reported 140,000 IDR/kg in recent weeks.

As Dr Ross Ainsworth reported in Beef Central on Friday, butchers throughout the Greater Jakarta area have gone on strike to protest the import cutbacks and subsequent soaring beef prices.

Indonesia’s Trade Minister Rachmat Gobel told Indonesian media yesterday the Government will now import “50,000 tonnes of beef” from Australia as the domestic beef price continues to rise due to undersupply.

‘The scarcity is obvious. If it disturbs the economic cycle, we must take action,’ he said on Monday, as quoted by Indonesian website tribunnews.com.

He said the State Logistics Agency Bulog will be given the authority for beef distribution.

Trade sources have told Beef Central this morning that there is still much confusion around the announcement.

The Minister was reported as saying Indonesia will now import 50,000 ‘tonnes of beef’ but that would amount to the equivalent of around 280,000 live cattle.

Industry stakeholders are confident the announcement is for 50,000 live cattle to be imported through Bulog, and will be for heavier slaughter weight cattle (loosely defined as 350kg or heavier). The Minister has reportedly stated the additional cattle will be imported ready for slaughter after a 14-day quarantine period.

The announcement coincides with a tour of Indonesia by the primary industries ministers from the Northern Territory and Queensland, Willem Westra van Holthe and Bill Byrne.

Mr van Holthe said in a statement issued this morning that the decision is for another 50,000 cattle.

He said was pleased to see Indonesia had decided to increase the live cattle export quota.

NTCA CEO Tracey Hayes, travelling as part of the delegation, told Beef Central at the time of publishing this article that the Indonesian Government had confirmed this morning that the permits will be for 50,000 head of slaughter cattle.

Minister Westra van Holthe will spend several more days in Indonesia before continuing on to Thailand where he will undertake a field trip with industry.

At the same time the Jokowi Government has announced more definitive intentions to diversity its beef and cattle supply sources beyond Australia by saying it will establish quarantine islands to support the import of cattle from disease-free zones within Foot and Mouth Disease affected countries in future.

Last week the Jakarta Post reported that Indonesia is assessing a plan to set up quarantine islands to enable to strengthen scrutiny of cattle imported from countries that have FMD-free zones, such as Brazil and possibly India.

The Indonesian Agriculture Ministry’s livestock and animal health director general, Muladno, told the media the islands will host a series of thorough veterinary examinations and intensive treatment for imported heifers and feedlot cattle suspected of disease contamination, before entering the distribution network.

“We will accommodate [imported] cattle breeding on those designated islands. Their calves will then be carefully examined and cleared for distribution,” he said during a press briefing on Monday last week.

Muladno added that the plan would help to avert the potential spread of disease as Indonesia looked to buy cattle and meat from countries with foot-and-mouth disease (FMD)-free zones, as stipulated by the 2014 Animal Husbandry and Animal Health Law.

At present, Indonesia can only source live cattle and meat from countries wholly FMD-free as declared by the World Organization for Animal Health (OIE), particularly Australia, New Zealand, Canada and the US, in line with a previous law passed in 2009. 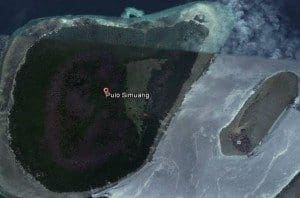 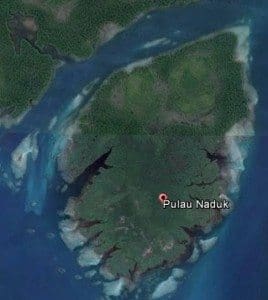 Muladno said that expanding import sources would be necessary to provide the country with affordable livestock and meat prices.  When the quarantine islands and all facilities are ready, the government will start importing cows from countries that have FMD-free zones he said.

He added that the government was finalising the plan, including picking the islands for quarantine and preparing a government regulation on the new arrangement, but declined to elaborate on the potential places and exact time frame.

The Agriculture Ministry’s quarantine agency chief Banun Sri Harpini said potential quarantine islands could be Naduk Island in Bangka-Belitung province and Simuang Island in Central Sulawesi province, due to their economic and technical viability. Historically, the islands have been free from animal diseases and they have clean water and ecosystems that could support the imported cattle.

Google Earth images (above left) show that both locations would require a lot of work, with no infrastructure or even port facilities established at either island yet.

Moves by Australia’s near neighbour to open its borders to cattle from countries affected by FMD will be of significant concern to Australia’s multi-billion cattle industry. In the 1960s, 70s and early 80s, the Australian Government invested heavily in efforts to successfully eradicate FMD from Indonesia, which benefited Indonesian farmers and gave Australia’s cattle industry the benefit of regional protection from FMD.

The Indonesian Parliament introduced amendments to Animal Health laws last year that would allow the import of cattle from disease free zones and for the establishment of quarantine islands for the same purpose.

A Government spokesperson told Beef Central the implementing regulations and the practical implementation are still being developed so it is still too early to know how the new import policy will work.