The usual market reaction following Ramadan and Lebaran holidays is for peak prices to ease back as everyone has spent their money over their holiday period and the market returns to more normal pricing levels.

The reverse has occurred this year as the severe reduction in Q3 permits means that feedlots wont have enough stock to allow for a consistent supply for their butcher customers over the coming months.

Their immediate response following the announcement was to begin to ration feedlot sales to ensure they do not run out of slaughter stock. Prices of both live cattle and beef in the wet and supermarkets have immediately shot up, in some cases to record levels. The traditional price hike at the end of Ramadan produced a top selling price for slaughter ox of around Rp40,000 live wt. Only 12 days later, the Jakarta price is ranging from Rp42,000 to as high as Rp46,000. Meat prices are on a similar trajectory as the flow of cattle slows right down. Some supermarkets have no beef on the shelves at all.

The public backlash has begun with demonstrations by butchers and other stakeholders in Lampung last week and Tasikmalaya (west Java) last Sunday 2nd August. Demonstrations are being planned for Jabodetabek (Greater Jakarta area) from the 9th to the 12th of August and the following week in Bandung. During these demonstrations in greater Jakarta and Bandung wet markets for beef will be closed. There are almost 50 million people living in West Java with the majority affected by these market closures. Demonstrations are also planned for stakeholders to gather and voice their grievances in front of the Presidential Palace on the 5th and the 6th of August.

For the price chart this month I will use a conservative Rp42,000 per kg live wt for the end of July. The dramatic rise in price on the graph is a combination of real price rises and a rapidly weakening Rupiah – even against the very weak AUD$.

I have heard all the rumours doing the rounds of Jakarta from “definitely no new permits” to be issued to “new permits will be released any day” so it’s anyone’s guess. On balance, the government regulates its import permits with the stated aim of keeping prices as low as possible for the consuming public so if logic can play any part in decision making here then the best bet would be that some more permits are likely to be issued in the near future. The recent statements of the various Ministers involved have certainly left the door open for additional permit allocations.

The most significant observation in this response is one that everyone in the industry should take careful note of. For the last 20 years or so, if the Indonesian demand (permits) were suddenly reduced then the result was a significant price reduction firstly across northern Australia but subsequently in all of Australia because the Indonesian market was such a large and dominant force for Australian demand.

The result this time however is that Australian prices have continued to climb steeply AND this is happening during an ongoing and severe drought in Queensland. This is uncharted territory for the Australian cattle industry and for all of our customers, domestic and international. The Australian herd has declined so severely that there are significant shortages to meet the demand from all sources (except Indonesia) which continue to grow.

Demand and Supply RULES. The Australian herd has collapsed and the world demand continues to want more cattle and beef regardless of the price rises to date. The newly expanded customer base combined with a reduced supply capacity has provided Australia with a depth and spread of customers to allow it to be insulated from significant market shocks like the recent Q3 permit reductions.

The weak Aussie dollar is helping offset high prices for importers while the Rupiah is also slipping so the cross rates have not moved significantly.

A new supermarket has just opened in my suburb in western Jakarta. Below are some of the store opening specials – some prime Tasmanian beef and some local knuckle. These photos were taken on the 14th of July, which is why the prices are quite low compared to today’s rates. Prices are quoted per 100grams. For a quick price check use 10,000 Rupiah to $1 so 49,800 per 100 grams converts to $49.80 AUD for tenderloin and $39.80 for rib eye. Good thing they were on special! Note the normal prices in the fine print. Knuckle from locally slaughtered cattle likely to be sourced from Australia. By the end of July the price was almost Rp190,000 per kg compared to Rp135,800 below.

The pressure is still on with steady flows of imports during the month from Thailand which has been suffering a price drop and redirecting their slaughter cattle to the best regional market which for the month of July has been Vietnam.

Prices are under most pressure in Ho Chi Minh City where the general price is around 71,000 Dong but there have been reports of panic selling by some importers with discounted spot prices quoted as low as 65,000 Dong.

The Hanoi rate remains stronger with prices around the 74,000 mark. August should see an easing in the flow of cattle out of Thailand but may also see more live imports from cattle redirected away from Indonesia. The permit situation in Indonesia will exert pressure on the Vietnamese market for some time to come. The reopening of the Mekong river trade from Thailand to China via northern Myanmar will have a major impact but only time will tell just how significant so plenty of volatility to come for the Vietnamese prices yet.

CCTV installations for enhanced traceability across the Vietnamese supply chains have been completed in the north with the south only a few weeks away from full coverage.

Rumours were circulating during July of a shipment of feeder cattle arriving in Vietnam from Colombia in South America. I have been unable to confirm this but the principles involved here are important.

If the trade for feeder cattle ever gets started to the USA this would mean the a lot of large capacity vessels would be returning through the Panama canal, just around the corner from Colombia. This scenario is also tempered by the fact that it would mean large export sales from Australia to the US and Colombia does not have a supply of disease free cattle that would be large enough to have any significant impact on the global live cattle prices. So, an interesting new supply concept and niche opportunity but definitely not a significant threat.

Prices across Thailand have weakened further to between 85 and 90 Baht per kg live weight for slaughter steers. This is primarily the result of the traditional peak-selling season during the monsoon/planting period when grass fatteners and feedlots have most difficulty holding and feeding cattle. This wet season has been quite poor resulting in what the locals call drought conditions. This contrasts drastically with record rainfall in neighbouring Myanmar causing dramatic flooding. One Myanmar location reported a 24 hour rainfall of 1000 mm or about 24 inches. The good news for Thailand and the regional beef market generally is that both the Thai/Myanmar border at Mae Sot and the Mekong boat cattle trade to China are both back in operation after closures for about a month for a mix of political and operational reasons.

While the Thai trade sends cattle north to China and east to Vietnam, the China trade has always been the most lucrative so as markets get back to normal it appears likely that the majority of quality slaughter cattle will once again go to the Mekong and the flow towards Vietnam will slow down and prices there will firm up. This will help stabilise the Vietnamese market which has been suffering from bouts of oversupply for some months.

Minor price rises in the Malaysian report are mainly as a result of the Ringgit depreciating even more dramatically than the AUD.

Very little to comment on here except that the Peso is even weaker than the AUD here too. For this month I have used the exchange rate of AUD$1 to Peso 33.5

Prices remain weak in the Beijing and Shanghai areas of China with the increase in the AUD price since last month entirely due to currency fluctuations.

The big news of course this month is the signing of the Chinese health protocol for slaughter and feeder cattle imports from Australia. While many people are getting very excited about the potential for huge numbers, this market will be a very modest one for some time, certainly until the protocol is modified from its current version. Essentially, this protocol is designed to permit imports to commence but restrict the flow of cattle from Australia to modest and manageable numbers.

The issues that restrict potential export numbers include :-

Regardless of these restrictions it is quite likely that a number of smaller shipments will sail from Portland in Victoria where they have access to bluetongue and HGP free cattle. Given the current high prices for slaughter ox in this part of Australia, I suspect that if China takes only 50 to 100,000 slaughter steers out of this market over the next 12 months it will still have a significant affect on the local and national price. With live weight prices for quality ox in southern Australia already reaching the low $3 range, a new customer taking an additional 50 to 100,000 head will surely push those prices to $3.50 territory and give producers their first tantalizing glimpse at the $4 prize. When the drought finally breaks in Queensland and females begin to be withdrawn from the market then $4 per kg live weight doesn’t look that hard at all.

Longer term, the fundamentals in China remain the same – strong demand and weak local supply so imports will continue to be essential to keep a lid on prices and Australia is the best placed supplier in the world to deliver the highest quality live and box beef product.

See below some graphs from my sources in China. Not sure of the exact parameters involved but the important thing is the trends which confirm once again what we have assumed has been happening over the last decade :-

I’m not sure how China manages to consistently kill more than 45 million head of cattle from a domestic herd of about 105 million but the one certain conclusion from these statistics is that a growing supply of beef and live cattle imports will be necessary for China for the foreseeable future. And Australia is best placed in all the world to supply the top quality segment of this endless demand. 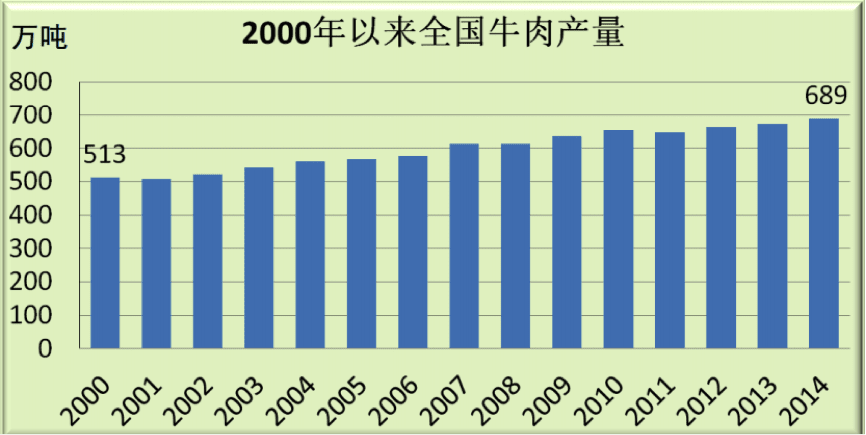 Number of cattle slaughtered in China – almost 50 million head in 2013. 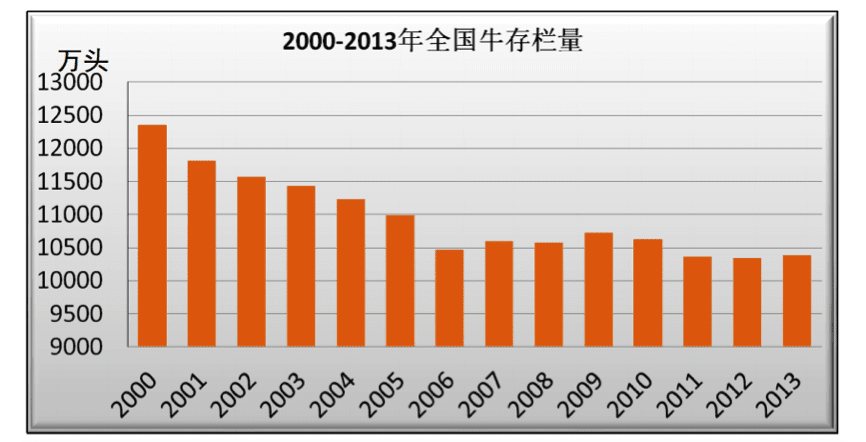 Average price of beef over the last 14 years

These figures are converted to AUD$ from their respective currencies which are changing every day so the actual prices here are corrupted slightly by constant foreign exchange fluctuations. The AUD$ figures presented below should be regarded as reliable trends rather than exact individual prices. Where possible the meat cut used for pricing in the wet and supermarket is Knuckle/Round