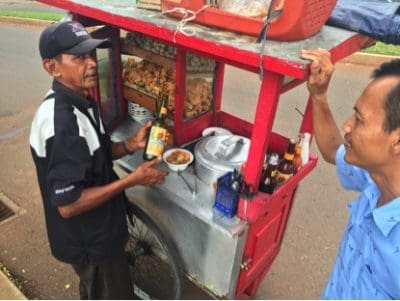 The looming influx of potentially large volumes of cheap, frozen Indian buffalo meat into Indonesia is understandably attracting a lot of interest in Australia’s northern cattle industry, which is heavily geared toward supplying the country with feeder cattle.

Indonesia’s State Logistics Agency (Bulog) confirmed on Tuesday that the first batch of imported buffalo meat from India will arrive in early August.

Beef Central columnist Dr Ross Ainsworth, who is based in Jakarta and has been closely watching the market for many years, believes Indian buffalo meat has the potential to significantly displace Australian beef in the market and reduce demand for cattle imports.

However, there are mixed views in the country as to how the Indian buffalo meat issue will play out, and some of those heavily invested in the Australia-Indonesia cattle trade are talking down the potential impacts.

One cattle importer in Indonesia sent a collection of Indonesian news and information items to Beef Central this week to underline his view that Indian buffalo meat does not pose a major threat to demand for beef, or the long-running Australia-Indonesian cattle trade.

He asked to comment anonymously, in light of the political scrutiny currently being applied on the cattle importing sector in response to high beef prices in Indonesia.

There seems to be little disagreement over one central point – that frozen Indian buffalo meat will not be well received by consumers used to fresh beef in the wet markets.

The main issue under debate is whether cheaper, frozen buffalo meat will provide a viable alternative to fresh beef for the manufacture of popular bakso balls, a traditional street food which accounts for a large percentage of beef consumption in Indonesia.

Dr Ainsworth says the experts he has spoken to in the market agree that frozen buffalo meat will be an extremely attractive alternative to fresh Aussie beef.

Much of the current basko product in Indonesia already uses frozen beef (the very cheapest trimmings) from Australia, he says, so the fact imported buffalo meat will be frozen is no obstacle to its use in Bakso balls. Rather, price will be the main determining factor, in his view, and there is no doubt that frozen buffalo meat will be a much cheaper alternative to fresh Australian beef.

In making the case suggesting buffalo meat will not have a significant impact, the Indonesian importer pointed to several recent news articles in Indonesia demonstrating a general resistance at Indonesian consumer level to frozen, buffalo meat.

Consumption of buffalo meat in Indonesia is currently very small, based on data from Indonesia’s National Bureau of Statistics (BPS).

BPS data quoted in a June 15, 2016, article in the national newspaper ‘Bisnis Indonesia’ suggests that less than one percent of the Indonesian population consumed buffalo meat (based on 2014 data – a clipping of the article in Indonesian bahasa is copied below this article).

“People argue that the consumption is small because production is also small, but the main driver culturally speaking is that the people of Indonesia do not like buffalo meat at all,” the cattle importer said.

“We are heavily cuisine driven, and box beef and buffalo meat do not suit the mass consumers.”

The main reason he cited was that consumption of buffalo meat was very small and would not contribute significantly to meeting beef demand.

The Vice-Chairman of Legislature in Indonesia’s House of Representatives, Firman Soebagyo, has also publicly rejected the Minister of Agriculture’s plan to import buffalo meat. He says it is against the culture of the Indonesian consumer who prefers to consume beef as oppose buffalo meat.

The Central Government’s plan to import frozen buffalo meat from India has already met with some negative response from the market, according to this article.

It explains how traders and consumers alike have rejected buffalo meat, even though the price is far cheaper than fresh beef. Traders also spoke against the inferior quality of the buffalo meat and said it will not sell amongst the consumer.

A trader also mentioned she had tried the boxed beef recently imported by the Government and consumers did not like it compared to fresh beef.

Similar sentiments were expressed in other articles.

In this Detik story a wet market trader states that buffalo meat “Will not affect beef prices much because Indonesians still prefer fresh beef, as opposed to buffalo meat which is very rarely consumed.”

In the Tribune News in Lampung, a trader at the Kotabumi wet market named Sumartini states he is very sure the entry of Buffalo meat will not affect current fresh beef prices.

Another trader, Sutaryo, shares the same view and says “the people here prefer fresh beef and none of them have ever sold buffalo meat because nobody liked it”.

Yani, a household consumer, agrees, saying fresh beef is what she is used to, and she has never bought buffalo meat for consumption.

Indonesian lot feeder Dicky Adiwoso, a well-known and respected stakeholder in the Australia-Indonesian cattle trade, explained to Indonesian readers in another Detik article that most frozen buffalo meat will end up in the meat manufacturing industry, not the mass wet market where fresh beef from Australian imported cattle sells, because Indonesians rarely buy buffalo meat.

While buffalo meat will be much cheaper, Dicky states Indonesians will still primarily buy fresh beef in the wet market.

He explains that the strategy of feedlots and local cattle farmers in Indonesia will remain focused on producing high quality and healthy meat, because people value that and were willing to pay more as the economy grows.

The current perception of buffalo meat in Indonesia is that it is of inferior quality.

Highlighting the disparity of views that exists over whether frozen buffalo meat can be used to make good bakso balls, one export industry source told Beef Central this week that fresh meat is still preferred for bakso, because frozen meat is “too watery” and doesn’t take up the spices.

The exporter also wanted to emphasise this point: “We need to remember what caused Indonesia to finally allow imported Indian buffalo – the supply and pricing situation in Australia is continuing to force our customers to work harder at finding cheaper alternate supply.”

What we can say for sure is that predicting the future in Indonesia is an all but impossible task.

Let’s make a note to revisit this issue in six months time, compare predictions with actual outcomes and see who is closest to the reality.