When the Indonesian government officially permitted the importation of Indian buffalo beef on the 8th of June 2016, it triggered events that will result in a tectonic shift in the Indonesia beef industry with significant but less dramatic impacts in Australia.

If the importation of Indian beef had been approved about three or four years ago, it would have led to a major recession within the Australian cattle industry.

It is helpful to understand the history of the Indonesia beef industry to develop a feel for the likely impacts of this momentous policy decision.

The modern history of the Indonesian industry can be broken down into three major eras :-

From the beginning of the 20th century, most of the islands of Indonesia were well supplied with cattle or buffalo or both which were an essential resource for agricultural draft power. As Java became more densely populated and wealthier during the latter part of the 20th century it commenced the importation of slaughter cattle from some of the outer islands, especially Sulawesi, the Eastern Island chain and Sumatera.

By the end of the 1980’s, as the economy of Indonesia began to really take off, local supplies of slaughter cattle were not sufficient to prevent prices from climbing to levels at which the government began to consider new solutions to the problem of supply.

During the latter part of this period, the Australian government provided some assistance to Indonesia to support its national program to eradicated Foot and Mouth Disease. This project was successfully completed during the late 1970’s providing Australia with an invaluable buffer between the infected areas of mainland South East Asia and northern Australia.

Prominent Indonesian businessman (and recent Presidential candidate) Aburizal Bakrie purchased a share in the Tipperary cattle station in the Northern Territory of Australia during 1990. At the same time he was instrumental in convincing the Suharto government to open the Indonesian industry to the importation of feeder cattle from Australia.

After the opening of the trade in 1991, Aussie feeder cattle were able to utilise the massive quantities of agricultural waste products available across the country to very efficiently convert them into fat cattle conveniently located near the greatest demand in and around Jakarta in West Java. The Indonesian feedlot industry, utilising Australian feeder cattle, became an outstanding success story with annual imports reaching 700,000 head or more on a number of occasions.

Apart from the Asian financial meltdown of 1997-1999, the trade has been constantly active and mutually beneficial to both Australia and Indonesia, with both sides enjoying the benefits of the business for almost 25 years.

Around 2005/6 the Indonesian government became increasingly concerned that the decline of their domestic herd was being driven, at least in part, by the high level of Australian imports. In response, the government began to enforce the individual animal weight limit of 350kg to ensure that value adding was enjoyed by the local industry, as well as increasing incentives for feedlotters to import breeding cattle.

Despite these measures, prices of retail beef steadily increased while the domestic herd continued to decline. Successive Ministers implemented a range of different policies aimed at pushing the price of beef down and the numbers of the domestic cattle herd up. None were successful while some were in fact counter-productive.

The Indonesian political frustration with high beef prices and a shrinking domestic herd finally worked its way up the political ladder until the new President Jokowi personally took up the challenge of solving the problem during 2015.

With a publicly stated Presidential target of Rp80,000 per kg for beef in the wet markets as his goal and the current market price sticking stubbornly around Rp130,000, it became obvious that tinkering with the existing industry policies was a waste of time. While the option of importation of Indian beef had been considered on innumerable occasions in the past, it had always been rejected on the basis of the risk of Foot and Mouth Disease (FMD) introduction to the national herd (through contaminated Indian beef).

The President doesn’t tell me what he is thinking but my guess is that a summary of his analysis of the situation went something like this :-

There are two key features of the domestic beef market that will decide the outcome of the competition between the demand for frozen Indian beef and live cattle from Australia.

Indonesian consumers have been trained for generations to be suspicious of “frozen” beef.

Currently, more than 90% of Indonesians only buy their meat in the wet markets where there is no refrigeration. After about 11 o’clock on any steamy tropical morning (after being slaughtered about midnight), the remaining unsold beef sitting on the market table is in danger of going rotten. The traditional approach, after a final attempt to sell the leftovers at a discount, is to throw them into an icebox or, more recently, a chest freezer (see photo below). 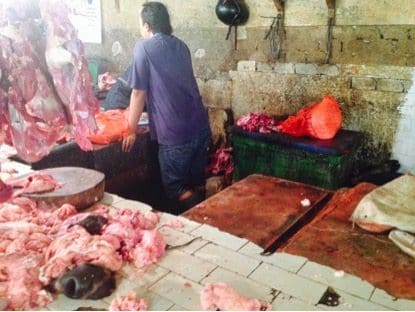 Note the “green” plastic icebox at the back of this wet market beef stall.

These lumps of “frozen” beef are then pulled out tomorrow morning and presented for sale once again. Anyone with even the slightest meat buying experience can easily spot the difference between cold, thawing frozen beef and fresh, hot meat. Everyone in the market knows that this “frozen” product is “on the turn” and borderline rotten from yesterday and to be avoided unless you are really desperate for a bargain.

So after 100 years of buyer experience constantly being reinforced that frozen product is yesterday’s dregs being recycled by the trader, it will require a major education program to convince the general population to buy frozen Indian buffalo beef with confidence.

This has been partially successful in north Sumatera where Indian beef has been smuggled across the Malacca Straits for decades but it has only ever achieved a minor niche in the local market reserved for cheap product sold in bulk for celebrations like weddings and parties where large numbers of guests need to be fed by hosts who need to keep their costs down.

Bakso balls are the Indonesian equivalent of the Aussie meat pie, a cheap and tasty fast food that has a huge national following. These “meat” balls are manufactured from a range of products including beef, chicken and fish. The balls are made by grinding up the meat base into a paste and adding tapioca flour, other fillers, water and various herbs and spices to create an endless array of meatball recipes with complex quality grading scales and specialty branding schemes. The majority are made by individual entrepreneurs who buy the ingredients at the wet market, make the balls on the spot or at home then quickly sell the product fresh which is usually presented in the form of a soup with noodles and vegetables. 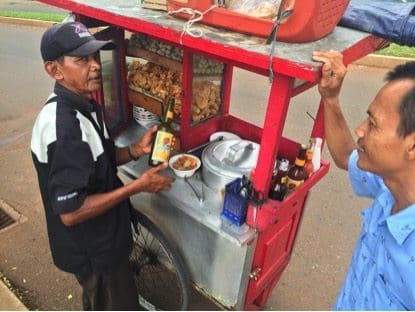 Jakarta taxi driver getting his $2 bakso soup at a roadside stall.

Sales are made from pushcarts to small shops to back of the motorbike stands to national franchises. Large manufacturing companies also make bakso on an industrial scale with vast arrays of different varieties available everywhere from corner shops to the large supermarket chains across the country. 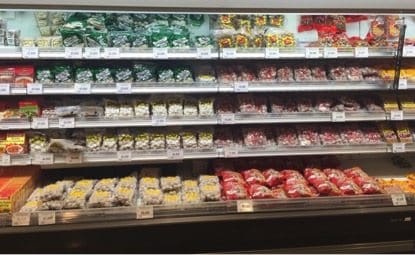 As bakso balls are made from ground up meat products, there is likely to be no resistance to frozen beef. In fact, buffalo beef has a reputation for being an excellent manufacturing meat because it takes up water even better than cattle beef. A Well-known and quite expensive bakso franchise in an up-market mall.

So the key question is, how much of the current Australian feeder cattle beef ends up as a bakso ball? I have discussed this question with a number of very experienced industry observers with the range of answers provided from 40 to 70%! For the sake of this crude analysis I will assume that bakso utilizes 50% of the Australian product which will be totally substituted by frozen Indian buffalo beef.

With an annual Australian import number hovering either side of about 650,000 head, half of this is 325,000. Then we need to allow for some retail beef buyers who will be convinced to buy frozen buffalo in the wet market by a low price and some education and experience. If I rub my crystal ball then I can imagine that these re-educated, price sensitive buyers might represent as much as 20% of the remaining figure i.e. a further reduction of Australian live imports to about 260,000 head per year.

This won’t happen over night as it will take some time to get significant volumes of Indian product into the country and to establish the necessary cold chains and logistics. Customers will need to be educated to the handling and benefits of frozen buffalo and this is a process that could take 1 to 2 years to work through until it is known just how many local consumers will switch and how many will stick to fresh beef.

The large tonnage of Australian chilled and frozen beef currently imported to into Indonesia is in a very discrete (mainly high end) market sector and apart from some of the cheapest trimming products is unlikely to be affected by the new Indian imports.

Malaysia and Vietnam provide two interesting examples of how this competition might play out with each of these countries providing very different guidance. Malaysia was the first to take on Indian beef and this crashed the live trade from Australia in the late 70’s early 80s. Malaysian consumers now buy their beef in a clearly segmented market with cheap Indian product at the bottom, fresh Aussie beef derived from live imports in the middle and internationally sourced, top quality product at the very expensive end of the market. At the other end of the scale, Vietnam is the world’s largest importer of Indian beef taking about 800,000 tons or more per annum but their consumers don’t like the product much and prefer to buy fresh beef at much higher prices. The majority of Indian product is re-exported while demand for fresh beef from live Aussie cattle imports continues to climb.

Australian producers have only very recently found themselves in the fortunate position where world wide demand for their product is exceptionally strong while their domestic herd has contracted to very low levels.

This new environment will largely protect them from the rapid slowing in Indonesian demand but there may well be some short-term market disruptions as the Indonesian feedlot industry restructures.

This will probably begin with a relatively quick elimination of the less efficient operators but this will only account for about 20 to 30% of importers so there is likely to be a further fight for survival amongst the bigger players which will leave only the leanest, most innovative and most efficient enterprises still standing by the beginning of the 2017 dry season.

The expanding Vietnamese feedlot industry will help take up some of this lost capacity for Aussie exporters but times will be especially tough for them and for live cattle shipping companies.

Exporters thought they were having tough times already but there is a lot worse to come as longstanding Indonesian businesses begin to implode.

The other saviour for the Australian end of the live trade is China who is still sitting in the wings, continuing to develop their domestic feedlot and abattoir capacity with Australia as their only possible source of significant disease-free supply.

Perhaps the small but useful pull back in northern cattle prices that is likely to occur as Indonesia restructures might present an attractive opportunity for China to decide to pull the trigger on their large scale live cattle import program.