A PLANE carrying 175 Angus and Angus cross steers has taken off from Australia for China this afternoon, representing the first consignment delivered under the recently signed feeder and slaughter cattle protocol between the two countries.

Elders has assembled and transported the 480-600kg steers under a one-off import permit to formally open the trade.

The delivery has symbolic importance as the historic first delivery under the newly opened trade, and one that should now pave the way for larger volume shipments from Australia to China to commence.

However, that still requires new import permits to be issued by the Chinese Government, and there are still some practical protocol clarification issues for both sides to work through before bigger import orders follow.

“We see this as an important initial shipment that allows the commencement of the trade and will allow the opportunity for the Chinese and Australian authorities to review processes and procedures that have been put in place with this first shipment,” Mr Hall said.

“To review those and then make adjustments accordingly to ensure the procedures meet the requirements around the health protocols, the welfare requirements and the operational aspects of the shipment, but also that they are commercially viable for both sides of the trade in the future.”

There is no pipeline of known shipments under preparation for export yet as the industry waits for some outstanding issues to be clarified.

Chinese authorities are understood to have applied stringent rules around disinfecting and inspecting cattle for this air shipment to ensure the introduction of Australian feeder and slaughter cattle poses no danger to their domestic cattle herd.

Whether China will require the same standards for a high volume commercial sea shipment, and whether that would be viable for Australian exporters, are among some of the issues yet to be worked through.

Australia already has a large and long-established breeding cattle export trade to China which involves the shipment of around 50,000 dairy and beef cattle per year and is able to operate under rules that satisfy both China’s requirements for cattle health and disease-freedom and exporters’ and importers’ commercial terms.

Alison Penfold from Australian Livestock Exporter’s Council said both countries were still testing the understanding of the new protocol in practical terms.

“I think until everyone is clear on understanding the meaning and expectations I don’t think anyone is going to be putting a big boat on the water,” she said.

The consignment comprised 480-600kg slaughter ready steers sourced through Elders from southern NSW and northern Victoria, and will be delivered to Congqing Hondo Agriculture Group in Chongqing, China. The customer is a large lotfeeding, processing and meat distribution company.

The flight follows several months of consultation with government and supply chain approvals. 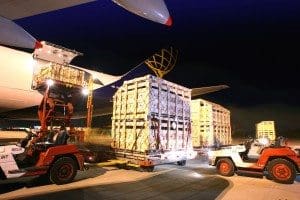 “The opening of feeder and slaughter markets will drive competition and demand for Australian cattle, creating new opportunities for exporters and producers alike,” Mr Allison said.

“As Asia’s demand for red meat increases, our ability to foster positive trade relationships with China and remain internationally competitive is vital for Australia’s agricultural industry,” he said.

“We have spent considerable time working with Chinese authorities and customers to ensure we have a mutual understanding of animal welfare practices, and the requirements of importing Australian cattle.”

Mr Hall said the focus of the Chinese authorities at this point appears to favour slaughter weight cattle rather than feeder cattle.

Cattle from southern Australia were also the most likely point of focus for the initial stages of the trade.

“Requirements around bluetongue zone which have been published before will probably (see) more southern type cattle going up into market than northern cattle, due to the bluetongue requirements.”

Mr Hall said the first shipment was another step forward for the development of the Australian cattle trade to China.

“I think there will be a requirement to look at how everything went and performed and then some adjustments made for the future which we hope will happen relatively soon so that the trade in feeder and slaughter cattle to China can evolve and start to become a commercial reality for Australian exporters and cattle producers.”

Chinese authorities issue import permits for every individual shipment, rather than issuing permits for multiple shipments or quotas, as Indonesia does.

Beef Central is not aware of any other import permits provided at this stage.

The first consignment of Australian slaughter cattle has arrived in China, exported under new market access conditions agreed in July this year between the Chinese and Australian governments.

Minister for Agriculture and Water Resources, Barnaby Joyce, said the 150 head of slaughter cattle exported by Elders travelled by air to Chongqing in China where all cattle were found to be healthy by Chinese authorities and placed into mandatory quarantine.

“The potential demand from China is for significant numbers of slaughter and feeder cattle each year,” Minister Joyce said.

“The fact that our first movement of live cattle to China has happened by air shows that ports on the coast are not the only areas close to this booming market.

“Inland cities can become genuine ports to overseas markets. This is part of the Coalition’s vision and plan for regional Australia. In this growing Asian economy the billions of people to our north are coming closer to regional Australia.

“While Australia cannot meet that demand overnight we can play a role as a reliable supplier of quality feeder and slaughter cattle. My hope is that this small consignment will show Australia is ready to play its part in meeting Chinese demand.

“It is great to see Elders, as an Australian exporter, developing its commercial relationships with Chinese importers and making the most of the market access conditions this government has developed—through the China Australia Free Trade Agreement (China FTA) and through the health protocols I signed with Minister Zhi Shuping.

“The China FTA will eliminate the 10 per cent tariff on live cattle within four years of its entry into force—a move that will only further enhance the attractiveness of our live cattle to Chinese importers.

“I want to recognise the efforts of the Chinese authorities in working with my department to finalise the many details necessary before a consignment of this nature can depart.

“Working together we have been able to satisfy China of the health status of our livestock and establish Exporter Supply Chain Assurance System compliant arrangements to ensure the welfare of the animals in the supply chain.

“This is a good example of the mutually beneficial trading relationship Australia and China have built over many years.”